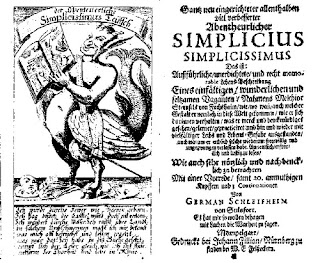 Don Quixote, The Pilgrim's Progress, The Adventures of Simplicius Simplicissimus: spot the odd one out among these 17th century masterpieces. Well, maybe that wouldn't be the case with German readers, who know Johann Jakob Christoffel von Grimmelshausen's 1668 picaresque novel much better than we do. I was lucky to find a second-hand copy of Mike Mitchell's lively translation for Dedalus, and I was hooked. Can't help wondering if Wagner knew this classic, too: like Siegfried and Tristan, Simplicius - real name Melchior Sternfels von Fuchsheim - loses his mother in infancy and is brought up by others. His noble birth is supposedly indicated by his being far from a fool, brought up by a mysterious hermit in a wood to be a learned child but too often forced to play the court jester. 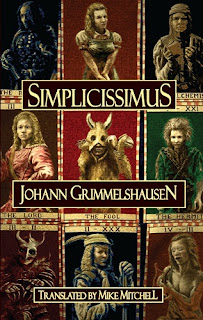 Unlike Bunyan's Christian, he moves through a real, not an allegorical, landscape - that of Germany, Switzerland and France during the Thirty Years War. We'll probably never know how much of his experience is the author's, whose biography is somewhat sketchy - but we do know that in 1634 Grimmelshausen fled from his ravaged home town to Hanau, under the protection of the same Colonel Ramsay who takes Simplicius under his wing. This part of the book is, to my mind, the most real and the best, with Simplicius 'transformed' into a bullcalf and speaking truth to power. He lectures Ramsay on the tribulations of being a governor; he dissects human nature and concludes his various sermons with this on the wisdom of animals, quite other than that disturbing line in Genesis, a bad start, about man having dominion over his fellow creatures:

What would you do if you lived among the animals and observed all the things they did? Then you would really have to acknowledge that it is clear that all animals have something to teach you in the special natural powers they possess in all their feelings and responses, be it caution, strength, gentleness, wildness. Each knows the others, they are different from each other, they look for what is good for them, keep away from what is harmful and avoid danger, gather what they need to feed themselves and sometimes even deceive you humans. This was why many ancient philosophers paid serious attention to these matters and were not ashamed to discuss whether unreasoning animals did not also have understanding. Go and watch the bees making wax and honey and then tell me what you think. 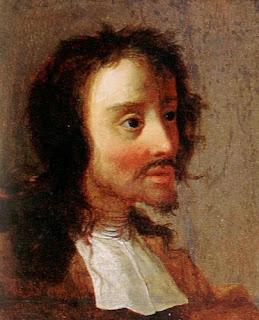 Grimmelshausen (pictured above)/Simplicius does not always wear his classical learning lightly - both are right to be proud of it - but there's plenty of low humour, fart jokes, no-holds-barred stuff about bodily functions. Simplicius isn't only a scholar in disguise; he's also a perfect warrior, though seemingly scrupulous if rather adept at changing sides (another truthfulness about the topsy-turvy nature of those horrible times). The picaresque leads the author and protagonist into self-contradiction, superstition as well as wisdom, brushes with the supernatural which are sometimes silly. But Simplicius is always capable of meditating on how his deeds haven't always matched up to his thoughts, how what seemed like good fortune has led him to ruin.

There are a few idylls in amidst the turbulence and horror (above and below, from Callot's engravings of the Thirty Years War's sufferings and miseries), like Simplicius's 'pilgrimage' into Switzerland:

Compared with other parts of Germany [sic], the country seemed as strange as if I had been in Brazil or China. I saw people living and working in peace, the byres were full of cattle, the farmyards swarming with chickens, geese and ducks, the roads safe for travellers and the inns crowded with people enjoying themselves. No one went in fear of enemy attack, of being plundered, of losing goods or chattels, life or limb; everyone lived secure under his own vine or fig tree. In comparison with other German states they lived lives of such pleasure and delight that, even though it seemed fairly rough, the country struck me as an earthly paradise, so that I was forever staring around me.

War, and the absence of war: the contrasts are as simple as that. Think the European Union today (and remember how, why it came into being - Boris Trump knew it, in his book on Churchill, and seems to have conveniently forgotten). Preaching over. Anyway, Simplicius finally turns his back on the vanity of the world and returns to the kind of retreat in which he grew up, only this time he's the hermit. A classic text, then, way beyond its value as social and historical document.
Posted by David at 08:37

The way of life in a country without war is exemplified especially by England, where nothing happened - ever - in most villages and towns and indeed all over the country. Unless visited by the Black Death or the Plague one century passed and then another, and then another, without disturbance. As Reynaud (I think it was ) said, this explains the English character.

Wars of the Roses? Peasants' revolt? Cavaliers v Roundheads? 'We' were not exactly unscathed. And many of our towns suffered more bomb destruction than the countless preserved gems of Czechia, for instance.

Somehow your lines, "But Simplicius is always capable of meditating on how his deeds haven't always matched up to his thoughts, how what seemed like good fortune has led him to ruin" put me immediately in mind of Goodman's brilliant text for the Chou En-Lai aria at the end of Nixon in China, particularly, "How much of what we did was good?/Everything seems to move beyond/Our remedy." And of course your comment, "War, and the absence of war: the contrasts are as simple as that," resonates completely. It is so simple to do right, and therefore all the more incomprehensible that we so often fail to do it.

Statistically over the years England was quiet. As regards the Wars of the Roses and the Civil War, only a few places were the scene of battles, and those armies fought each other - they did not set out to ruin the countryside. And the character of the English was set long before the bombs arrived. In Central Europe the effects of wars were frequent - the thirty years war in itself was terrible. Over the centuries plunder and devastation were always threats. Note the remarks of Marshall Blucher when he saw London in 1815 - peaceful and unprotected " What a place for plunder "

Like Milton's Satan, Sue, 'apprehending the good but powerless to be it'. And yes, Sir David, as compared to the Thirty Years' War our own rape and pillage was distinctly limited. But we've never been entirely free from man's appetite for random violence (viz the summer riots in London, brief though they were).

Just think what it was like for all time in a Suffolk village.... nothing ever happened.I can just remember the pre motor car days. The non-events in the countryside over centuries formed the English character. This is not upset by the fact of that there was some violence, occasionally, or recently.

Your quotations about Switzerland are echoed in recent reports from Canada where refugees are happy at every moment as there are no dangers threatening and enough food etc.

Only domestic murders, incest, crime. Nowhere is ever really that quiet and peaceful.

Got to love Justin Trudeau for the way he welcomed the Syrians. Integration thriving there, or so it seems.