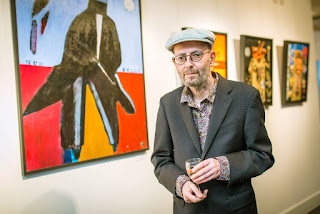 Rather feeble pun, but Liverpool-born artist Paul Sonabend's evening opening at the 12 Star Gallery on Tuesday was, after, all, prelude to an exhibition called 'Moon and Sun'. We came to know his work through the passionate advocacy of another very fine artist, first and foremost a sculptor, Deborah van der Beek, who has become a good friend along with her husband, musician Andrew, ever since she exhibited at the 12 Star when the European Commission was in Storey's Gate. Deborah has been visiting the retiring but delightful Paul at his flat and studio in Bath, bang opposite the Holburne Museum, for years, and as patron was convinced that he needed a major London show, so she organised one. Here she is pictured below in one of the many shots taken at the opening by Jamie Smith. 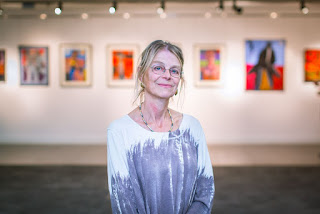 I love many of Paul's Biblical scenes and live in hope that he might turn to Greek myth and paint an Oedipus series. But you can't force an artist's imagination. Paul and Deborah have in common a fascination with the Ned Kelly story - in the central of the three pictures the van der Beeks have hanging in the dining room of their Lacock home, Ned Kelly meets Sancho Panza. Incidentally, we're the proud owners of one of Deborah's Don Quixote bronzes. 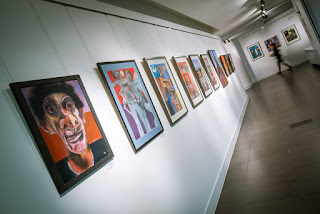 Need to go back and look at the pictures more carefully than one ever does swanning around receptions - as the host's sposo, I knew a lot of people at the launch so there was no time to wander thoughtfully observing. 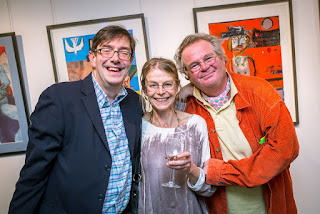 Here am I with Deborah and another artist of huge panache, our old friend Jonny Brown, who as an ardent Wagnerian has just furnished me with a whole list of unusual alternatives to listen to and watch for my Tristan und Isolde course at the Frontline Club. 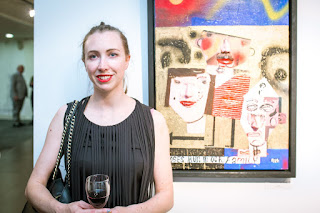 This is the lovely and talented performance artist TD (Theodora) van der Beek, whose nose features on the left in the picture behind her. We know one brother, Henry, from Christmas in Lacock but met Bertie, running a pizza shop with a difference in Brighton, and his girlfriend Maria, who makes the sorbets, for the first time. 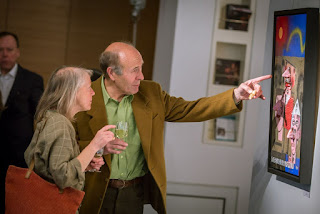 Andrew vdB pointing out a detail to Corsham neighbour Gog. 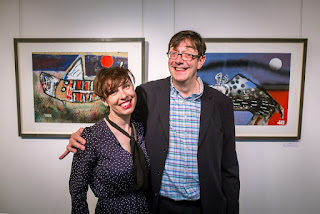 And I include this one only to mark my first proper meeting with the Head of the Czech Centre, Tereza Porybná, because she was our hostess-in-absentia in Prague, and a very wonderful time we had there and further east in Czechia thanks to her and her bonhomous father Zdenek Porybno. There's a bit of word/image play here because their surname has a bit of fish (-ryb-) in it. I'm wondering if those two paintings behind us might not make the perfect compliment to Mark Hearld's watercolour pheasant and fox and could hang on the wall opposite in the room which used to house the Steinway Boudoir Grand (on loan from its owner, now gone, alas). 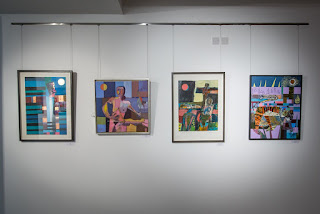 I genuinely love this artist's work, and would splash out if I can find the funds to prove it. Can't decide between Picasso, Joseph in his coat (pictured above on the left; I knew it already, and was trying to pay vague homage with my shirt) and the animal duo.

I remember the 12 Star FB post on this exhibit and was immediately drawn in by the Sonabend's "Portrait of the Artist as a Bluesman." Would love to be able to be spirited across the Atlantic to see this exhibit.

Was remarking to Deborah that my one regret here is that I hadn't absorbed all the titles, some of them quite wacky and piquantly oblique... Do we see you both here some time this summer?

Not this summer, sorry to say. Jackie, whom you met, and J's brother are coming across the pond to us this time around.

Sonabend is beginning to be discovered at long last! Thanks to this show and the EC for putting it on, all the many people who came to see it were able to appreciate the work of this pretty special artist.
And thank you David for all your kind words about me and family.

My best to Jackie, Sue. Would love to try one of the special curry houses in East Ham one day.

Shall be fascinated to see how the path to fame takes shape, Deborah. In a way it's irrelevant, because you've already done the spadework, but nice for Paul to get some financial help. Every word sincere - what good friends you are, and so easy to be with. That's a great portrait of you, hope you think so.