Shadows around a goldfinch 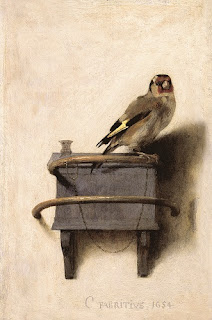 Any novel which takes one of Carel Fabritius's few remaining masterpieces* as its centrepiece gets off to a good start as far as I'm concerned. Had been wary of Donna Tartt since a friend vented a deep dislike of The Secret History, but The Goldfinch is a remarkable work by any standards. Its high, often delirious style, with telling details adding to the vividness of set-pieces like the New York bombing early on and a drug-addict dealer's den later in the book, is married to a gift for storytelling which makes Tartt something of a Dickens for our times. I've rarely been so tantalised by characters in a novel, and mildly tormented not to know whether my reading of it and the big gap I find in the narrative actually touch on what the author intended.

Let's declare it straight out: I fell in love with Boris, the clever vagabond who is the catalyst of the story - about which I don't want to give much away, since its twists and turns are all so fascinating -  and I like to think that he's the big thing in narrator Theo Decker's life too. Maybe this is wisdom after the event, but I connect Boris visually with one of Fabritius's rare self-portraits, knocking off a decade or so. 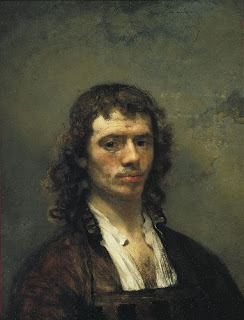 I was perplexed, too, by how few references our damaged hero makes to sex: after all, at the time of his first great crisis, he's a teenager cast adrift, and from my experience 14-year-old boys think about sex every couple of minutes. Yet here is a bereaved youth who rarely mentions it, only wild experiments with booze and drugs taken in Boris's company; who becomes romantically infatuated with a beautiful fellow-survivor -  and we're supposed to take her for the love of his life; and who in his 20s goes on to become engaged to a girl he doesn't love. By then he mentions several affairs with women, and retrospectively slips in mention of an older woman who seduced him years earlier; but it's all rather odd and offhand.

And then there's Boris, who kisses him on the lips when they part in Las Vegas and says he loves him - no, I misremembered this, carefully buried by the tergiversations of later chapters. Thus Theo at the end of Chapter 19, almost the mid-point of the book:

More than anything I was relieved that in my unfamiliar babbling-and-wanting-to-talk state I'd stopped myself blurting the thing on the edge of my tongue, the thing I'd never said, even though it was something we both knew well enough without my saying it out loud to him in the street - which was, of course, I love you.

Well might I wonder if I'd imagined that when it came to reading about the later encounters of Theo and Boris. In any case, as the friend who recommended the book to me said when I remarked that I wanted to see them end up together, he'd be impossible to live with; they both would. And yet. All this really shows is that I had my own ongoing dialogue with the novel, maybe wrongheaded, but serving to show how real the best fictional creations can be. 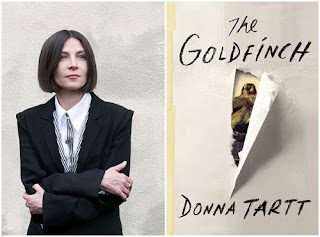 Tartt's skill in bringing to life the various episodes - in New York at the Metropolitan Museum, Las Vegas, New York again, Amsterdam in the dead of winter - shows a constant genius in regenerating interest and showing her characters in different lights, which are mostly dark, until the sublime epilogue. A lot of it is to do with the role of Fabritius's Goldfinch in Theo's life. I hope I can take some text-snippets out of context without giving too much away. Let's just say that he has had the original in his possession at the time of the first excerpt.

How could I have believed myself a better person, a wiser person, a more elevated and valuable and worthy-of-living person on the basis of my secret uptown [the painting in storage]? Yet I had. The painting had made me feel less mortal, less ordinary. It was support and vindication; it was sustenance and sum. It was the keystone that had held the whole cathedral up. And it was awful to learn, by having it so suddenly vanish from under me, that all of my adult life I'd been sustained by that great, hidden, savage joy: the conviction that my whole life was balanced atop a secret that might at any moment blow it apart.

Next we have some pertinent art criticism from the junkie dealer Horst. He's describing how in certain effects the artist is emulating trompe l'oeil conventions

But Fabritius...he's making a pun on the genre...because in other passages of the work - the head? the wing? - not creaturely or literal in the slightest, he takes the image apart very deliberately to show us how he painted it. Daubs and patches, very shaped and hand-worked, the neckline especially, a solid piece of paint, very abstract. Which is what makes him a genius less of his time than our own. There's a doubleness. You see the mark, you see the paint for the paint, and also the living bird.' 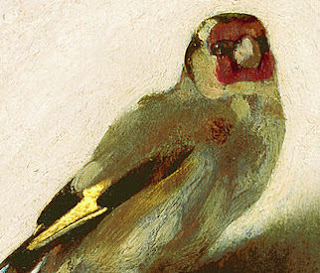 'Yes, well,' growled Boris, in the dark beyond the spotlight, snapping his cigarette lighter shut, 'if no paint, would be nothing to see.'

'Precisely.' Horst turned, his face cut by shadow. 'It's a joke, the Fabritius. It has a joke at its heart. And that's what all the very greatest masters do. Rembrandt. Velazquez. Late Titian. They make jokes. They amuse themselves. They build up the illusion, the trick - but step closer? it falls apart into brushstrokes. Abstract, unearthly. A different and much deeper sort of beauty. The thing and yet not the thing. I should say that that one tiny painting puts Fabritius in the rank of the greatest painters who ever lived.'

Later Hobie, the staunch lifeline for the flailing protagonist, talks of his old partner Welty - whether lover or not we never know, and Theo never seems to want to know - and his love of old paintings through reproductions, gainsaying the necessity of the work of art itself if lost.

'Because - the line of beauty is the line of beauty, It doesn't matter if it's been through a xerox machine a hundred times...with real greatness, there's a jolt at the end of the wire. It doesn't matter how often you grab hold of the line, or how many people have grabbed hold of it before you, It's the same line. Fallen from a higher life. It still carries some of the same shock.

And that leads to Theo's final epiphany, which is far too great and elusive to be excerpted. Tartt rises to the challenge in an apotheosis which is yet enigmatic enough to leave things open and us asking about the unknown futures of her great creations. Got The Little Friend lined up now for a later time when I can truly immerse myself in another world.

*A pupil of Rembrandt, Fabritius was killed at the age of 32 in the explosion of the Delft gunpowder magazine on 12 October 1654. Many of his paintings were destroyed along with his studio; only 12 are known to have survived. The incident clearly has its analogy in the catastrophe which Tartt imagines happening not far into the novel.
Posted by David at 07:52

This is a wonderful statement, the real measure of a great piece of fiction: "All this really shows is that I had my own ongoing dialogue with the novel, maybe wrongheaded, but serving to show how real the best fictional creations can be." I also was glad to be introduced to the artist of the painting. I had at some point run across that curious goldfinch on them, but didn't know who'd painted it. Tartt's words in the mouth of Horst are wonderful, particularly these: "You see the mark, you see the paint for the paint, and also the living bird." I'm reminded by this of having recently attended a study day in conjunction with the first (and long overdue) retrospective of the art of Louise Fishman, an abstract expressionist, but in addition so much else. One of the panel members focused on Fishman's painting "Portrait of Myself as a Man." We see at first the man's head, but then the panelist took us closer in to see the marks and the paint so powerfully that, thereafter, it was impossible to look at the portrait in the same way.

This is what I love - when one thing leads to another. I looked at a selection of images by Louise Fishman, including 'Portrait of Myself as A Man', and was hugely impressed. Not least by her nominally abstract paintings. So now I want to know more. Isn't that what it's all about?

David, your personal relationship with the novel, shared in this review, is as inviting as your description of the book, itself. The painter and writer are both new to me, and looking up Tartt reveals that she is influenced by Salinger, in addition to Dickens. Having learned this, I can sense, besides the sort of talent Dickens had for creating an entire world, the flavor of Salinger, drawing us into a secret life shared by only a few special characters. Just the sort of place a reader wants to go, between the covers of a book!

While ("one thing leading to another") Sue has been led to think of art study, I am led to contemplate art theft! The quotes you use to explain the mind and heart of art thieves are remarkable. "It's the same line. Fallen from a higher life. It still carries some of the same shock." I had known about this aspect, the indescribable "something" that comes to us through art. Even if we can't understand it, we recognize it. But I never suspected what is revealed in the quote from Theo, himself, that possession makes them feel themselves to be better, their lives elevated. What a beguiling, thought-provoking piece you have written about this book! -- Elizabeth

Only because it's a beguiling, thought-provoking book, Elisabeth. You must read it to find out the fascinating relationship between Theo and his Goldfinch. I shouldn't even give away how he comes by it. But the developing psychology of ownership, of sitting on a hoard, is one of the many fascinations of the book.

Must read Salinger - was turned off The Catcher in the Rye as a teenager, for a very poor reason. And the question of 'the line of beauty' links The Goldfinch to another masterly story with an interesting protagonist, Alan Hollinghurst's novel of that name. He's another great stylist, too. Among Americans since Steinbeck, only A M Homes strikes me as being on the same level as Tartt. But then I haven't read so very widely.