They do things differently in Benelux 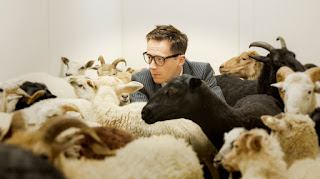 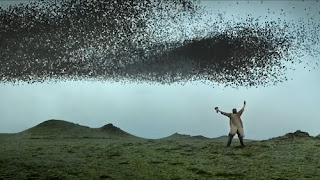 Well, forget the 'Lux' bit, but I couldn't think of a better way of combining the geniuses (genii?) of Ivo van Hove on stage - his Kings of War with Toneelgroep Amsterdam at the Barbican - and Jaco Van Dormael, whose French-Belgian film Le tout nouveau testament (The Brand New Testament) we saw on Tuesday night at the Gate Cinema Notting Hill. I just can't imagine a British filmmaker pulling that kind of fantasy off - it would slop into whimsy or archness - though in terms of theatre we do have our one and only visionary, Richard Jones, whose combination of rigour and imagination seems closest to van Hove's. 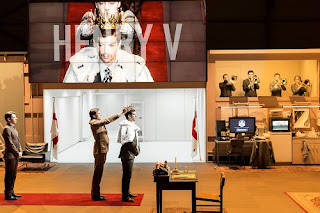 As far as Kings of War is concerned, I kick myself for not having caught Toneelgroep's two previous visits to the Barbican - had booked for Scenes for a Marriage and then needed to go on a work trip - or van Hove's Song from Far Away at the Young Vic. Its star, Eelco Smits, naked for most of the duration of that play about mourning, makes no less interesting a psychological study of Henry VI (pictured up top by set designer and photographer Jan Versweyveld, van Hove's real-life partner since 1980) than those of Henry V (an austerely handsome Ramsey Nasr) and Richard III (Hans Kesting, as funny-horrifying a villain as any I've seen). 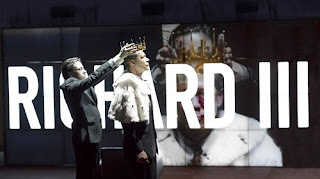 Van Hove and company give them all possible support in the focus they pull from the three early history plays. No need to write more about it here, just read my very long Arts Desk rave, but make sure you see the last days of the run if you're in town over the Bank Holiday weekend. In the long term, we need van Hove to direct as much opera here in the UK as he's already done on the continent. A Ring from him would, I'm sure, be amazing (he's done it in Antwerp). The Brand New Testament begins with a startling enough premise: God (Benoît Poelvoorde) is alive but not very well, a power hungry bully and domestic tyrant who lives in a dingy sealed apartment above the streets of Brussels with his virtually mute wife -an old goddess, it later turns out - and daughter Éa (Pili Groyne, pictured above), JCs sister, who provides the narration and gets out into the urban world to do good for six randomly chosen disciples. The mythic kick to the tale, worthy of a Brecht or a Beckett, is that information is released to all humans giving their death-dates, liberating many from God's tyranny. He, of course, can't function in the real world with his inarticulate rages and ends up - I hope this isn't a spoiler - making washing machines in Uzbekistan. 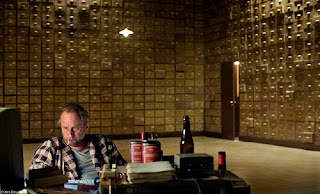 There's enough imagination here for 10 films: how quickly we forget, for example, the brilliant Genesis sequence where God places first giraffes and then Adam, his private parts covered by a reader's-wives sign, on the city streets. A feminist/matriarchal message is wryly introduced and sustained through to what I hope will come as a surprising and delightful denouement. Every one of the stories of the 'disciples' has visual poetry to it: starlings multiply for adventurer manqué  Marc (Serge Larivière) as he journeys to the far north, a lost hand skates on a table for Laura Verlinden's beautiful Aurélie, and of course it's game of Catherine Deneuve to end up in bed with a gorilla.

Éa hears each human's 'inner music': mostly poetic, but it's Fučík's Entry of the Gladiators for Deneuve's character as the girl leads her off to the circus. The found music is all good; the original score for the rest of the film is too trite for some serious reflections on the sadness and absurdity of the human comedy.

Otherwise, as I intimated up top, the fantasy is just a hairsbreadth away from mannered artificiality. But the three of us who went to see it agreed that Van Dormael just gets away with it. And if your reaction is similar to mine, you'll think about various strands in the film for days afterwards.
Posted by David at 11:10

The Brand New Testament is something for which I'll be on the look-out, you describe it so tantalizingly here. (Somehow, your description puts movies of Buñuel to mind.) I'm very sorry indeed I won't have a chance to see the Kings of War, but have made a mental note (such as I can these days!) to keep my eye out for van Hove.

Your chance, you lucky devil, is to see The Crucible on Broadway, which he directed, with - if I remember rightly - Ben Whishaw and certainly Saoirse Ronan. That needs a transfer here, but I don't suppose things work that way round.

Now off to the last of the ENO Chorus's Brahms German Requiems with Mark Wigglesworth. And requiem it is for ENO with the appointment of Daniel Kramer as Artistic Director. Maybe the best of the ones who were left after souls less willing to compromise realised what a poisoned chalice the post would be, but I don't have much confidence. And as for Music Director, after the best thing they ever had walked out the door, I can't say I care much anymore.

The ENO appointment looks grim in deed. The Time tagline, which I just saw before dropping by again here, wrote he "has no experience running a major arts organization." What could possibly be the point of that? (Fear the Broadway run of The Crucible will be out of bounds for us, but I've noted it, in the event. Saoirse Ronan, too, aagh.)

I may have to eat my words. Chorus members after the terrific German Requiem performance tonight were actually quite optimistic, given that they'd had a voice in the election and that in conversation this morning he seemed to want to fight for a full-time company and to make sure grievances were aired. That at least would help forge some kind of path forward. But it's all still so fragile. And as you say an AD in charge of a company as large as ENO needs to have had some modest experience in that field already. Vedremo.