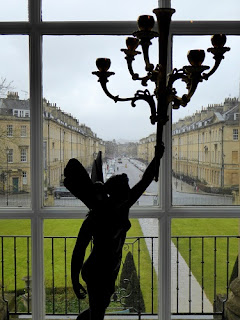 On an Easter Saturday of mainly torrential rain, there was nothing for it but to abandon plans for a long walk and set off for the galleries of Bath. And so in effect our sole leg-stretching, apart from standing and looking at pictures, was to walk from the Holburne Museum with its top floor of superb Gainsboroughs and Ramsays 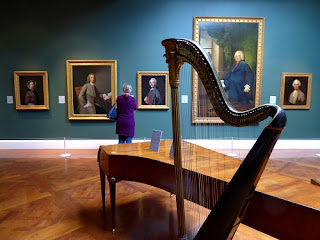 along Great Pulteney Street to the Victoria Art Gallery, holding in one big room art from the 15th century to Howard Hodgkin and Grayson Perry. 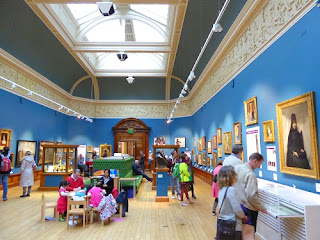 The Holburne has had much more money lavished on it, so that a star attraction for many is the ace cafe extension with a nice museum attached. Needless to say, we started out there with a second breakfast before J and I headed up to the top floor to see the best pictures. All of these were given long after bachelor Sir Thomas William Holburne (1793-1874) lived here with his three unmarried sisters and amassed an odd miscellany of stuff, most of it second-rate, on display in the rooms below. The collection was bequeathed to 'the people of Bath' by one of said sisters in 1882. The real beauties didn't join the parade until bequests in the mid 1950s and early 1960s. 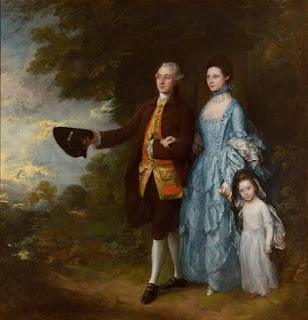 Inevitably local grandees grown rich on slavery appear in all their finery. The above Gainsborough, a long-term loan, shows George Byam, owner of an Antigua plantation, with his wife, Bath girl Louisa, and their child Selina (added at a later date along with a colour-change to Louisa's gown). There are two very different priests, a group of Ramsay portraits and a rather fine Stubbs of the Rev. Robert Carter Thelwall and his family. 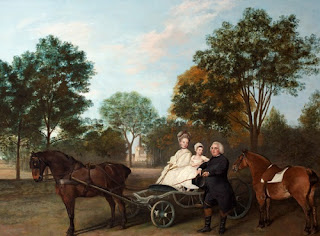 Historically interesting, too, is Zoffany's painting of the Auriol and Dashwood families in India. 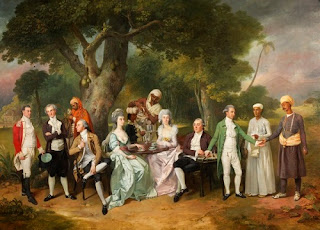 One wall has a collection of theatrical paintings which really ought to go to the Garrick, but they make a fine set. I'm indebted to the volunteer in the room for pointing out that the grand piano at the top of the staircase outside, which I would have walked straight past, was a 1930s Steinway used by Rachmaninov in his London concerts of that time. Here's my 11-note stretch, not quite as impressive as his (14). My fingers are long but my hands are not huge. 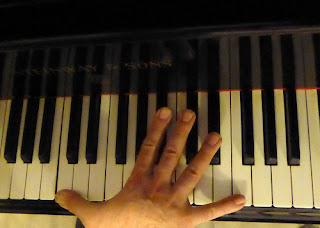 On the floor below, there's a beautiful light and airy room with 3D computer printed teapots in the middle, and various candelabra from 1780 to 1830 well placed on the windowsills with views over to Sydney Place and Great Pulteney Street beyond. Here's Mercury. 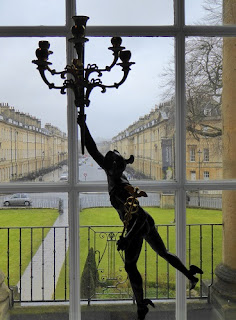 We had a necessary interlude in the studio of Paul Sonabend, right next to a residence of Jane Austen. 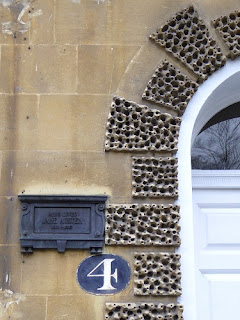 Paul has been championed by Deborah, the great sculptor who was one of our two hosts, and rightly so - I think he's a genius. They share in common a fascination with Ned Kelly - Sancho Panza dialoguing with him in the middle of this triptych - 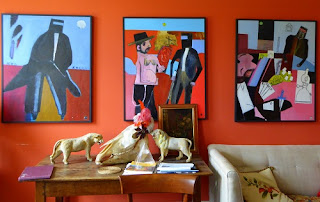 and Paul's other themes are most often biblical, Old and New Testaments. This Crucifixion, with cigarette cases containing texts from Bible pages, seems especially pertinent. 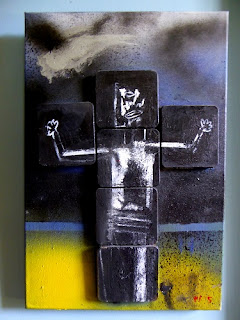 There is shortly to be a Sonabend show at Europe House, so it was good for J to meet the artist. I liked him tremendously but didn't intrude on his privacy by asking for any photos. 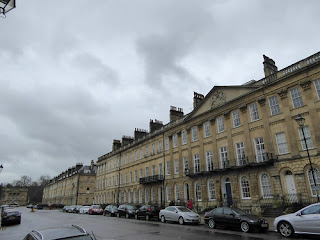 So down Great Pulteney Street and over the bridge, which you're hardly aware of as such with shops on both side until you come to the end 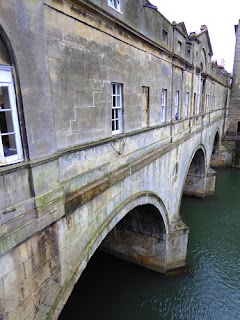 to the Victoria Gallery. Deborah and Andrew wanted to see the Grayson Perry exhibition, which I wish from what they told us we'd seen, but never having caught the permanent collection, I thought it was time we made its acquaintance. The gallery felt a bit shambolic and had a slight air of decay/underfunding, but it was good to see it well used. And I hope to return for the Kenneth Armitage exhibition due shortly, because I very much like his People in the Wind (on the right below against Sickerts and Matthew Smiths, among others). 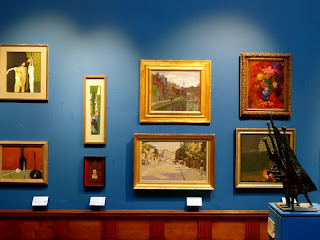 Then it was back under a downpour to the car, home for tea and out to one of those fine riverside restaurants in Bradford on Avon for a pretty good evening meal.
Posted by David at 15:50

What a nice day despite the rain, the rooms of the museum do look architecturally speaking a lot like those of our National Gallery built in 1988. Same way of hanging pictures etc.. We do hope to see you both in London in September when we come through after our pilgrimage to Will's Ancestral Isle.

Two things aren't apparent in the piece, Laurent: the oval skylights in the Holburne which let in so much natural light, along the lines of Sir John Soane's Dulwich Picture Gallery (though the building is earlier), and the handsome, symmetrical exterior of the Sydney Hotel, built in 1794 to serve the Pleasure Gardens in which Jane Austen walked (she doesn't seem to have liked much else in Bath). Nothing especially distinguished about the Victoria Museum building of a century later (Grade II listed as opposed to the Holburne's Grade I).

You will be most welcome in London as before. From a small island (PEI) to a slightly larger one. I only hope we'll still be true Europeans by then. If it's out, then we may already have moved to Ireland...