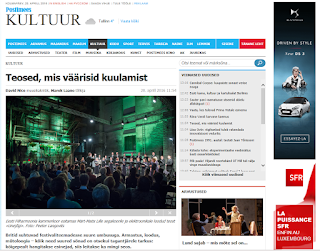 If you can see the small print - miniscule at the above size - you'll note that I had a review of (the last four days of) the Estonian Music Days festival in amazing Tallinn printed in the country's main national, Postimees. Dealings with the editor, as with all Estonians I've met, have been a delight, in marked contrast to most newspaper liaising over here. And what I wrote seems to have been kept intact in the translation. Should you read Estonian, or wish to see some more festival photos, the whole thing is here.

A different piece with some overlap that might make more sense to you is over on The Arts Desk. That covers most of the ground as far as the events were concerned - more to come here about other discoveries this time in Tallinn - but I want to be indulged with a few of my own pics. I got some good ones at the re-launch of Estonia's first electronic organ the varioola. 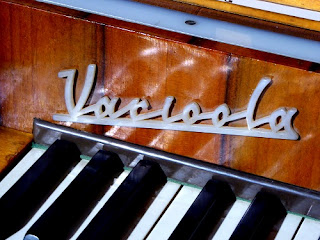 Having expressed doubts about whether I would survive the experience -  'Eek!! First electronic organ: must it be revived?!' responded one friend by e - I found most of the experience riveting: not just the compositions, in amplified sound by Tammo Sumera which made the veteran, born 1959, sound splendid, but also the visitation of one of its two inventors. 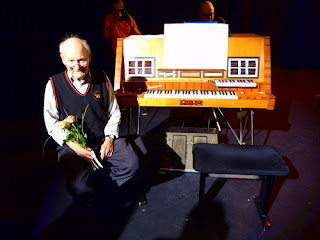 Anatol Sügis's biography reads nicely in the English half of the programme book, according to which he is 'a determined, particular person who is often referred to as an "eco-refugee and gastronomic noncomformist". He has a PhD in physics and, himself a vegan [here a gratuitous food photo, to signal that I ate in the wonderful V - for Vegan - restaurant in the old town, and had to try their beetroot ravioli], 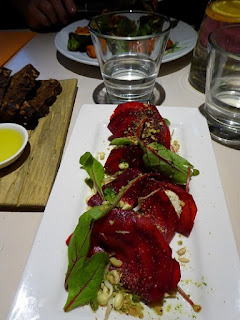 promotes ways for green living.' Although, as I wrote, I could hardly understand a word of his conversation in Estonian with the rather more reserved electronics prof Margo Kolar, I was instantly charmed. 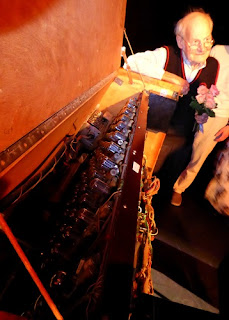 Managed to have a brief chat with him in English while inspecting the instrument (caught here by festival photographer Mari Arnover with fellow writer, the composer Simon Cummings) 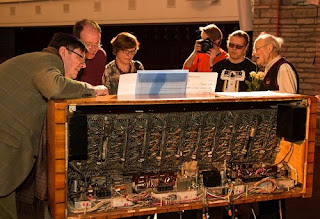 and learnt that his co-inventor is living still but was unable to get out of the house and come along. The charming informality of this aftermath was typical of all the events. And this cues a real delight I was lucky to catch while out wandering that afternoon. Looking out from the window of a second-hand bookshop I saw a group of teenagers holding hands and dressed in various national costumes. 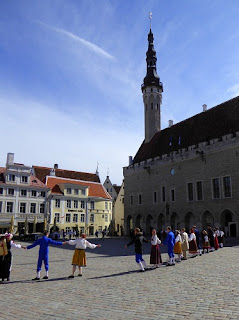 Following them to the main square, where they formed a circle and did a kind of hokey-cokey to a national song, I found they were marking the last day of school. 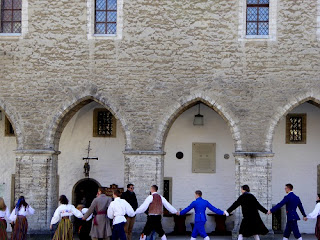 This is good tradition in a country that's anything but conservative in its general outlook - and the kind of thing a visitor always hopes to encounter, a national rite that's not put on for tourists. 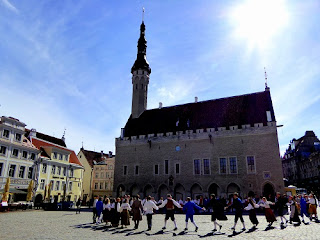 As for the progressive, of course that was present in every event I attended. And the last was gobsmackingly impressive in the Cauldron Hall of the vast former power plant, over 100 years old and now serving as an arts centre. Somewhat concealed here behind another old industrial building, but the chimney makes a nice counterpart to St Olav's Church spire. 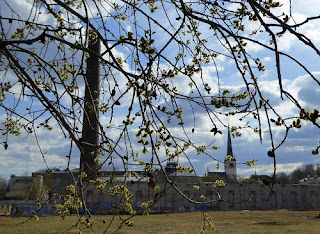 Next to it is the deliciously makeshift Estonian Museum of Contemporary Art. 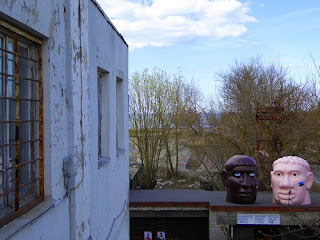 I found its good bookshop run by a friendly girl and its creatively wrought cafe run by a rather melancholy one with a shy dog. What I like about this whole area down near the Baltic shore is that there clearly hasn't been the money to chichify it in the way you might find in Paris, London or Berlin (now, at any rate - parts of the city do remind me of the east Berlin I first got to know in the late 1980s). They've just left the Linnahall, formerly the Lenin Palace of Culture and Sport built in 1980 for the Olympics, to its own devices, so it's covered in some quite lively graffiti (love the crows) and left to the young to hang out there in a very non-threatening way. 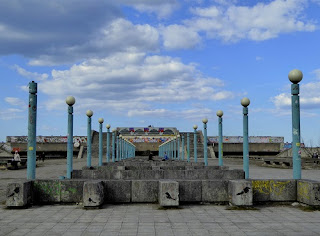 I was lucky to catch a set of installations at the Contemporary Art Museum which had only been assembled the previous day. All six are competing for the prestigious Köler Prize, and I got to vote which one I liked the best. 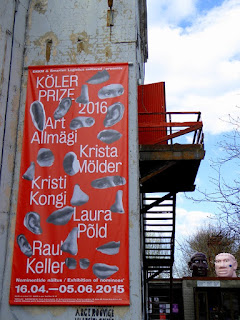 From an historical perspective, the most striking installation had to be Art Allmägi's Cold War with its surveillance devices covered in simulated snow and ice below, 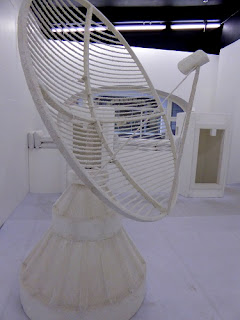 with radars in the dark on the floor above. 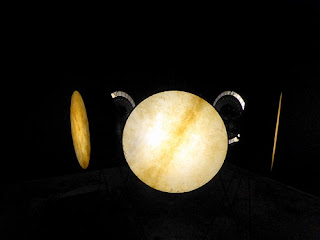 One 'operations' room has surveillance screens beneath an icon and (out of sight here) an old chandelier and iron gates to suggest the placid surface. 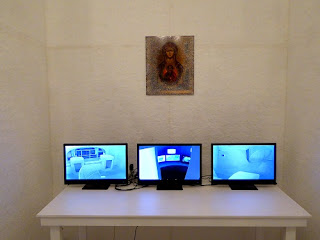 Like the landscapes of terror I heard in Lepo Sumera's masterly Sixth Symphony, this is a powerful commentary on what always lay below the surface of Estonia's Soviet years, evident everywhere outside the Old Town.

In the meantime, new life pulses within the Creative Hub, and the EMD's special theme had greened the space, with striking effects on the piping and the boilers. 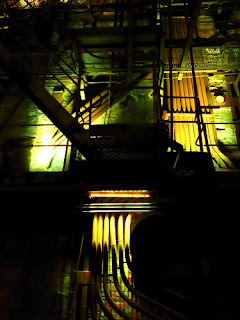 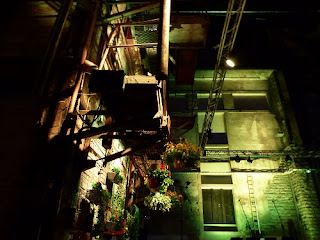 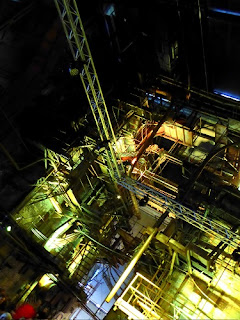 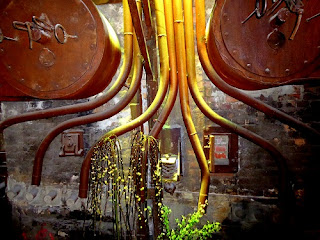 If the Estonian Philharmonic Chamber Choir's concert here did not provide the anticipated grand finale to the festival - though the acoustics were superb - then plenty else had hit the heights. And I'll never forget the Sumera symphony conducted so assuredly by Anu Tali. Have to discover the other five now.

Finally, an appropriately Shakespearean note the day after the anniversary (and a superb 400th anniversary concert conducted by Jurowski, which I came back early from Odense to catch and write about on The Arts Desk, well worth it): which play is this, being performed in Tallinn's beautifully located City Theatre? 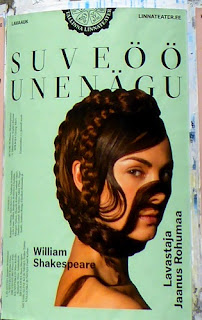 I couldn't make it out - and the image didn't exactly help - until an Estonian told me that suve means 'summer' and õõ 'night' - that's become a favourite word. You grasp the rest. The full picture follows. 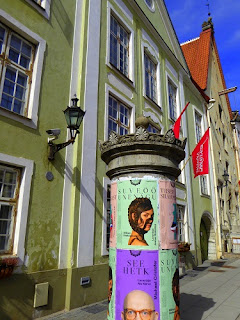 I love this post so much. We also ate at V, and love this connection with you and also Anneli, who posted a marvelous photograph of you on FB (while I'm not the least tempted to revive my account there, I'm so glad I saw her post). Anyway, that you netted out of this an article in Kultuur is absolutely the best! I hope we will all meet there together someday.

I regret we only had a day to spend in Tallinn as it was one of those day stops on a Baltic cruise. The interior of the Church of the Holy Spirit was particularly intriguing and just wandering the old city was a delight. Heading over to the Arts Desk for a read.

It was happy timing that Anneli arrived back from Israel in time for us to spend most of the last day together. Yes, I saw the Facebook picture - she is so naughty, making a big fuss of any photos of herself that go public but slapping up others on Facebook before you can say 'cheese!' Anyway, it could have been worse.

I agree, Will, the Church of the Holy Spirit has the most wonderful interior of any I've seen in Tallinn. And I had it all to myself... I'm surprised how much there still was (is) to discover in a relatively small city.

When Hitler did his deal with Stalin in 1939 he insisted that the Germans in the Baltic States should be able to leave before the Russians took over. This meant that the Baltic aristocracy ( mostly German) had to leave their estates. They were allotted equivalent estates which had been taken from the dispossessed Polish aristocracy ( who were moved to Auschwitz, not then an extermination camp). Unfortunately....... not all the Baltic counts etc got their new estates before the war broke out in earnest, so they had to be satisfied with a certificate saying they were due so many hectares and so many castles. It seems incredible but that is what happened. How this was sorted out after the collapse of the USSR I do not know

Tangential but interesting, Sir David. Actually quite good for the Estonians that they no longer have an aristocracy, though of course one would not wish the horrors of being under the Germans and then the Russians on anyone.

It is in the human subconscious to admit aristocrats as leaders. I often wondered how the Medici did it till I saw the Kennedy family's appeal to so many

Anyway, maybe the Baltic counts have got their estates back, as in Bohemia ?

Aristocratic behaviour has nothing to do with rank or title - Obama is our best example. Plenty of others in smaller countries.

I don't know about the restitution of estates.