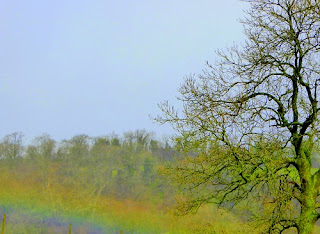 Back to our inspiring friends Andrew and Deborah, familiar to regular readers as the occupiers of Cantax House - Dumbledore's residence to Potterfans - and doyen/ennes in their respective spheres of music and art. Meals at home feature plentiful garden produce, but this time there was a choice rarity for the first evening's dessert - chocolate made from cocoa pods gleaned while Andrew was running a choral course on Tobago. This of course is Deborah's photo. 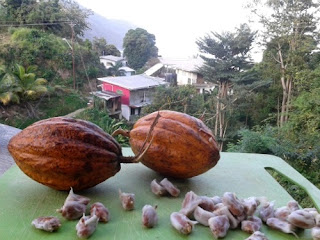 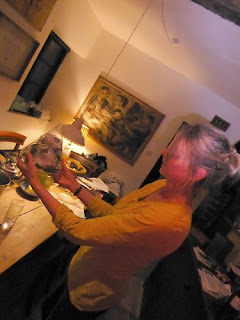 were like no chocolate I've ever tasted - bitter and intense; I swear I loved it.

Variable Easter weekend weather meant that we did less walking than planned: a non-stop-rainy Saturday saw us moving from one gallery to another, very hastily, in Bath (planned for a post or two ahead). We took our chances on a Sunday of heavy showers and sunny intervals with a hike around the valleys beyond Box, starting at the head of the wooded glade where the Cherry Tree Project runs its courses and going beyond the point at which we'd turned on a previous occasion. 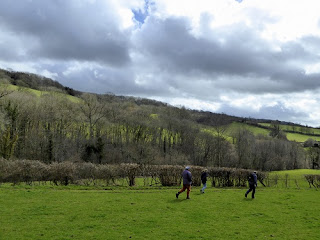 Still in March, the trees on the hilltops still kept their skeletal winter outlines 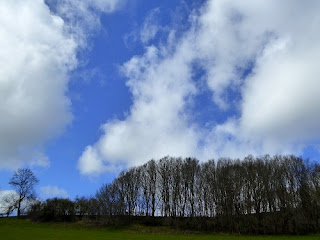 but it was lusher down by St Catherine's stream in the beautiful valley of that name, up which we subsequently headed, past the church, house and farm - also St Catherine's - occupied by Jane Seymour (the pretty actress, not the unfortunate wife of Henry VIII) 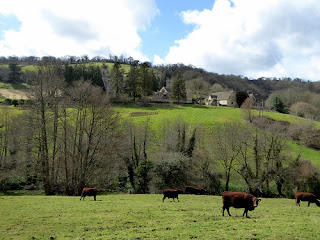 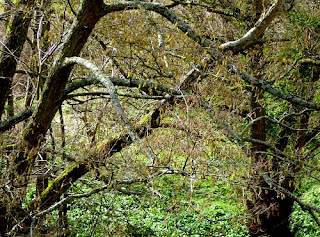 until we reached a lane, badger's tracks on one side 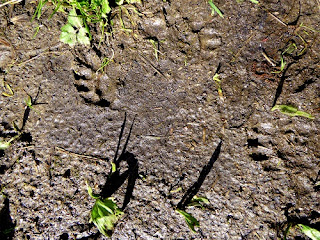 and wild primroses on the other. 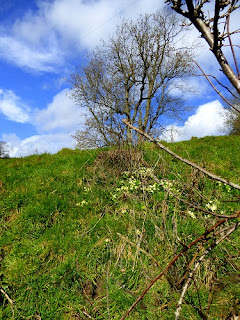 Mud made the going slow. Then it was up another valley, towards the less quagmireish uplands, at which point dark clouds spelled inexorable rain 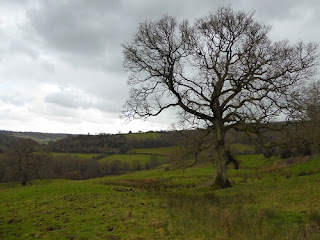 which burst in a wild squall (I was fine in waterproofs from head to toe). The immediate moving away of the black sky 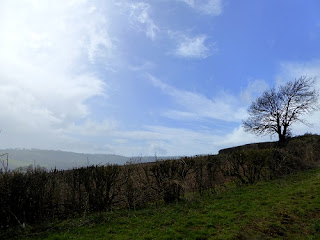 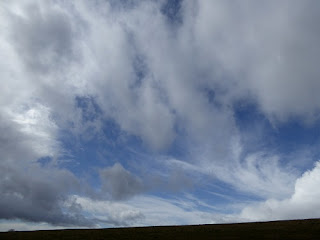 suggested a rainbow must be found, and it was, rather unusually, seen from above now that we were at the highest point arching down into yet another valley (probably the very top picture makes it clearer, letting you know what you're looking for here). 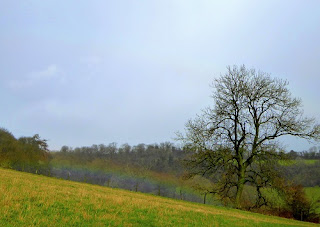 An old track, almost as straight as the nearby Roman road, took us on the level with views to the south 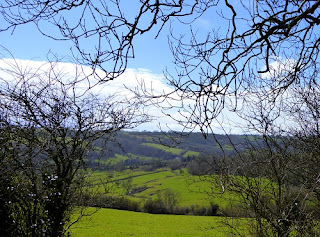 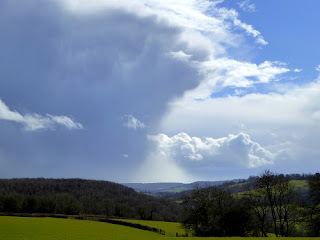 with very premature bluebells in the hedgerows 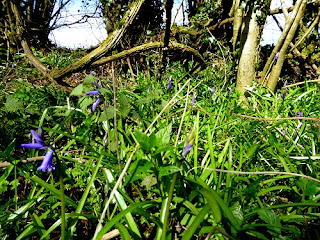 and horse chestnuts in bud and semi-leaf. 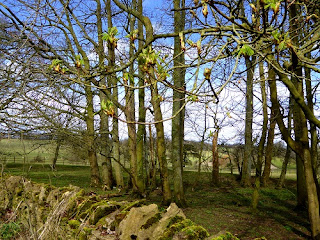 At a gatehouse with a hare on the roof 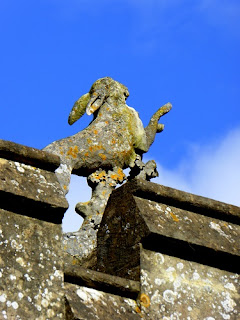 we turned into the estate of Ashwicke Hall, now run as the SABIS International School UK, and found the lambs in its fields inquisitive and unafraid. 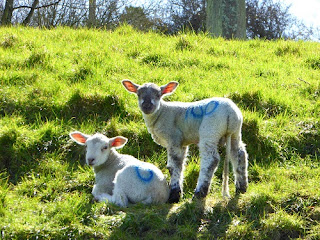 And thus, surprisingly, back to where the car was parked. The lamb surprise came late on the walk, as it had on Good Friday evening when we did our usual circuit of Lacock. The Abbey is well positioned to catch the evening sun 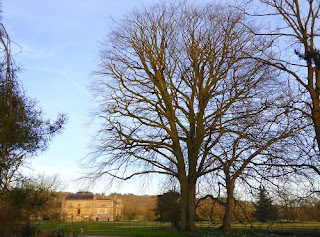 which was setting beyond the Avon - very low that day; by Monday it was flooding the water meadows. 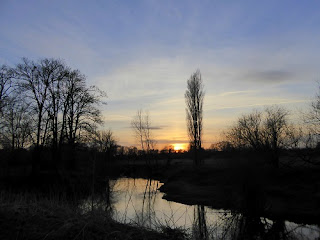 The river in turn separated us from the last field of sheep and gambolling lambs (they really do leap with all four feet off the ground). That tree in the middle distance has always had a special magic; in the summer, the sheep are grateful for its shade, all that's available in the open field. 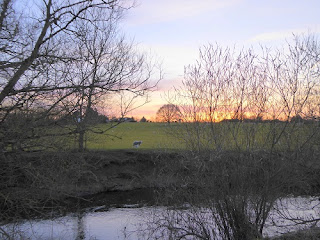 A group of particularly adventurous, danger-seeking lambs skedaddling up and down the bank held us rapt for a good 10 minutes, and then, once across the bridge, we caught them at close quarters 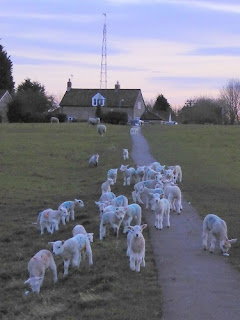 with some calmly trotting over to the other side of the path to regain their mothers. 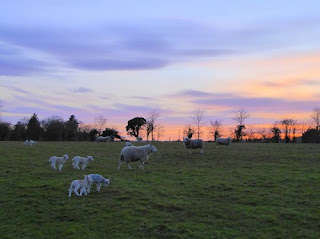 We knew the sunset was to be savoured; rain was forecast for Saturday and behaved even worse than anticipated. More on that day's discovery of the wonderful Holburne Museum anon.
Posted by David at 21:19

You are being very kind about the chocolate! Still, I was proud of making the REAL, unmistakeable stuff. I got in an incredible sticky mess doing it as it turns liquid, but then sets almost immediately.
Re gambolling lambs: I had to explain to a puzzled Russian (ex) boyfriend of our daughter, who wondered at...'gambling lambs?'

Just as I had to explain to our puzzled friend Natasha on her first time in London that 'hot dog' wasn't quite what she feared it was...

Wonderful time with you folk as always. I hope your painted postcards went to good homes today. Nearly everything was sold by the time J got to the RCA at 11am...and for the few that were left, queues a mile long.

Any sign of spring is welcome, and these are lovely (though the sun has just now come out and we are promised true springlike weather for the weekend). Good on you for expert preparation for a rainstorm, you deserve every inch of that rainbow, and yes, what an unusual perspective, arching down into the valley like that.

Greetings from Tallinn, where it's warm and sunny, and the blackbirds were singing around the St Nicholas Church at 9.30pm. Flower-wise, though, it's still snowdrop time.

Fact - lambs always run races for a while before 'bedtime'.
If you watch a field of ewes and young lambs in April and May, around 7 pm, you will see the lambs gathering in a corner and running races along the fence for as much as ten or fifteen minutes.
On the farm, the ewes and lambs were in a paddock between the farmhouse and the road, and passing cars would stop to watch the lambs.

'The farm', Catriona? What farm, and when? I didn't know you were of agricultural stock. Mind you, many of us are, from way back. I didn't know that about the crepuscular gambolling.

Writing this passing many a hawthorn-fringed farm on the train from Copenhagen to Odemse. Spring is here too.

Yes, indeed, I grew up on a farm, a small, mixed farm in Perthshire. Relatives were either farmers or teachers. I got my first pet lamb when I was 3 years old, and my second when I was 4, and she provided me with an annual income (from the sale of her twin lambs) for 10 years, from the age of 2 to 12, dying quietly in her sleep when she was 14 years old. One year, admittedly, she did have triplets, but Dad kept the sale price of the third lamb as well as the wool clip he kept towards her keep.

How woolly-wonderful! Incidentally, the m was a typo, can't really see what I'm doing on the train. It's Odense, of course, on farm-rich Fyn, and Nielsen's Springtime in Funen is running through my head.

Tallinn, Odense, you do get around. Greetings from my desk in sunny Leith.

Leith is just as exciting and I don't know it half as well despite having lived for four and a half years in Edinburgh... I would have come up for Robin T's Brahms 4 but of course he has incapacitating injury.

See you (here we go again) in Goettingen, if you're there for the first four days - all fixed up this end.