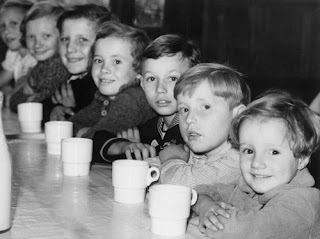 ...on/at the 294 MPs who voted against our accepting 3,000 frightened, unaccompanied and endangered refugee children into the UK*. Whatever the arguments - 'we're doing enough to help them where they are' (still leaving them prey to traffickers), 'this sets dangerous precedents' - it's morally wrong. The list of 294, named and shamed here, needs to be posted everywhere with mugshots attached - there is more than one kind of criminality. It might also be worth finding out how many are the children or descendents of refugees: the majority, I'd imagine. 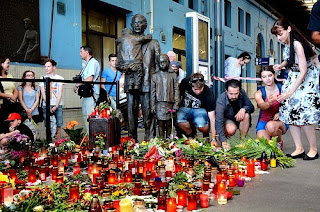 This man, Sir Nicholas Winton, honoured with a statue here in Prague (there's also one at Liverpool Street Station), would be turning in his grave. 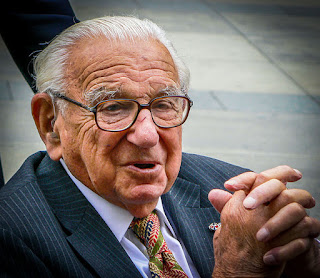 We don't need to go back to World War II - Belgian refugee children in the UK pictured up top - for precedents (our dear friend Edward Mendelson, by the way, was on the last of the Kindertransports from Vienna which also brought the current heroic - and so far rejected - proponent of compassion, Alf Dubs, saved - as it later turned out - by Winton, who became a friend). These are Bulgarian refugee children in 1914. 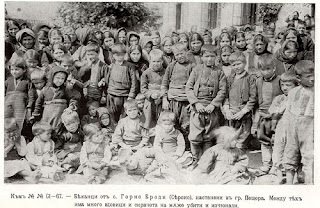 And so back into history. I wish Dickens were alive today to write a savage invective.

Can't we take a leaf out of Lebanon's book? It has more refugees than it can reasonably cope with, but education programmes for Syrian children are now strong. Gordon and Sarah Brown have been doing an admirable job to ensure more funding flows for the right to school. 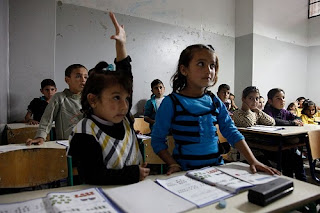 The moral bankruptcy currently rife in this country, or at least among its so-called leaders, seems to be coming to a head. All you have to say is 'Theresa May wants us to withdraw from the European Convention on Human Rights' and you know what's wrong with that. Though this film starring Patrick Stewart, with acknowledgments to Monty Python, is a good way to respond. Do watch through to the end, which had me rolling about with laughter. Doesn't seem embeddable as yet, so click on the link above to watch. 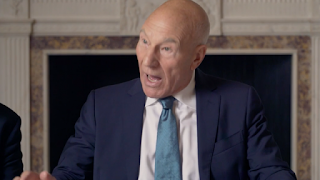 You don't need to make a parody of Jeremy Hunt (not the brightest button in the box, as this article by a former employee makes all too clear) vs junior doctors - it's way beyond satire already**, though the outcome is already looking tragic. Excellent clarity - from the medics' perspective - here. Everyone needs to know that senior doctors are to hand to make sure emergencies are handled during the current strike, so don't believe the scare stories. 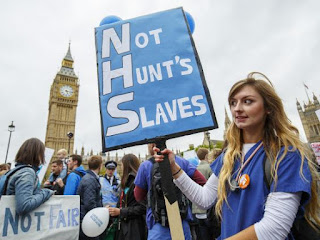 What horrible people we have in power. But I know this isn't true of the UK population as a whole - unless support for Brexit proves me wrong, in which case it will just be dangerous ignorance of the facts, which IS a problem here. Let's just hope Obama, the greatest AND most lovable statesman I've ever known in my lifetime, has had the desired effect. While he was here, he went to the Globe, too, on Shakespeare's birthday, happily coinciding with the grand finale of the company's amazing Hamlet world tour. Hope this picture is 'fair use' territory. 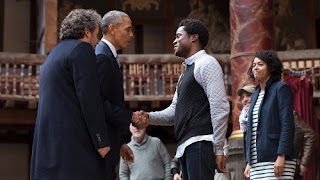 I wish it were simple for people to decide when faced with the equation 'Obama wants us to stay in Europe; Putin, Trump and Marine Le Pen want us out'. That and the pitiful roster of damaged human beings leading, if you can use the word, the Brexit campaign, should be enough to show folk what's going on.

Incidentally, when I last looked at the Patrick Stewart film, up popped an ad: 'Canadian immigration: do you qualify?' I hope I do if it's out of the EU for the UK: already having thoughts about moving to the diplo-mate's homeland, Ireland or, when it detaches, Scotland

PS - but let that wonderful artist Wolfgang Tillmans, one of the 12-Star Gallery's finest exhibitors, do more of the addressing in a sequence of sparely-designed messages. They can all be found here - my thanks to Graham Rickson for e-mailing the link - but this one is especially good. The main message (albeit in small print here): register to vote before 7 June 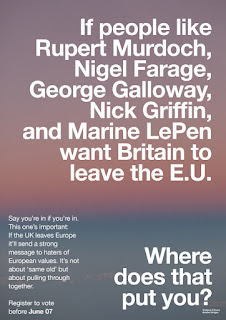 *Yet there is one notable exception among the Conservatives - Stephen Phillips QC MP, whose speech here should be the rule rather than the exception.

**Though Frankie Boyle can always go one better, and just has in The Guardian.
Posted by David at 12:51

There are far too many things, your side of the pond and ours, that are "way beyond satire already." On our side of the pond, Obama is the best he's ever been these days, and here is one of my favorite recent stories. A worrying aspect of his presidency, though, has also come to light: he has presided over the greatest loss of "down-ballot" Democrats in office in recent time, and it appears that the cause has more than a little to do with his own failure to focus on party building. We are all paying the price today, but I am glad, at least, to report that he's stepping up his work on this in this year's election. Perilous times.

Beyond satire indeed, Sue - I can't believe it when I see headlines like 'Trump announces foreign policy' - policy? Must look up what 'down-ballot' means, not aware of that situation.

"Down-ballot" or "down-ticket" refers to candidates for office below the president, Congress and also state and local candidates. I don't, by the way, wish to take away one jot from his considerable achievements. He understands what it means to lead and to govern, and I was glad to see, on that score, an excellent article in the New York Times today in which Obama reflects on his legacy vis-a-vis economic policy. On the political process side, however, while there is more to be understood on this, it appears that, for past elections, he created a political organization of his own, rather than working through the Democratic party, and this had the effect, among other things, of siphoning funds away from Democratic Party candidates for state and local office. He's adjusted course now, and not a moment too soon. (If we had a parliamentary system, I don't think this particular problem would arise, as the party is the driver and chooses its leader.)

Ah, I see. Thanks for explaining so clearly.

In discussing immigration policies, it is important to remember that in recent years the total for net immigration to the UK from non-EU countries has totaled hundreds of thousands - in the recent year a figure of over 300 000. Of these a limited proportion were asylum seekers but all had to be fitted in. Unless this figure is sharply reduced, taken with the natural growth of the resident population, it will be impossible to cap the constant growth in the population of the UK at whatever figure ( 70 million? 80 million? at present it is around 65 million). Everyone in the world wants to come here. Cameron when becoming PM stated that his aim was to get the figure down to tens of thousands instead of hundreds of thousands, and I am mystified why he has failed, since we control our borders for non-EU migrants. Had he succeeded there would have been room to make special arrangements for applicants such as the children ( I would probably let them in anyway) but as it is to let these applicants in would set a precedent.....soon there would be another heart rending case, and more generally those wishing to come here would construct a heart rending case for different applicants. As for looking after the asylum seekers in their camps etc abroad, Cameron took the lead on this at an early stage and has maintained the policy, with the Americans, despite pressure in this country to spend funds at home rather than abroad.

I've heard all this from you before, Sir David. I personally find it offensive under the circumstances. We could easily accommodate 3000 children, three times that number. Please don't talk about 'precedents'. Look Alf Dubs in the face and say all that to him.

One Tory at least has a conscience. See links to Stephen Phillips' powerful speech in the first footnote above.