BBC Music Mag Awards: with a smile and a song 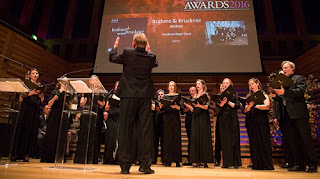 Happy for all the award winners at this year's ceremony, without having actually heard any of the CDs in question (the nearest I come is the world premiere of James MacMillan's Oboe Concerto, pretty much a masterpiece like all the other concertos he's composed to date). None of the candidates I'd reviewed - Barry's The Importance of Being Earnest at its London premiere, Tchaikovsky's Queen of Spades from Jansons and Strauss's Symphonia Domestica along with a revelatory Die Tageszeiten from Janowski - actually won, but that's not really the point. In those categories, I don't doubt that Sakari Oramo's Nielsen is superb - his BBC Symphony Orchestra cycle was the concert highlight of last season for me - or that Pappano's Verdi Aida with dream team led by the great Harteros and Kaufmann deserves its accolade as a studio rarity in the current climate. 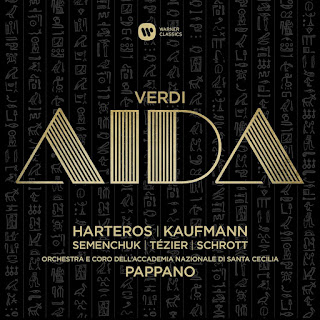 A copy arrived this morning, and just dipping into the Nile scene - I infinitely prefer the last two acts to the first two - I can tell why it's so special. Producer Stephen Johns spoke movingly of how Pappano, hearing the offstage chorus, said 'I wish my father had lived to hear this' (they played through the opera and sang all the roles when he was young). Harteros communicates so much in 'O patria mia'; it was obvious when she first appeared at the Royal Opera as Amelia in Simon Boccanegra that this was the best Verdi soprano since Mirella Freni - see the 2008 (!) blog post 'The real thing' - and so it's proved in the performances I was lucky enough to catch of Otello and Don Carlo in which she appeared.

It was a fun evening, not least because I got to sit next to my best pal in the business, Stephen Johnson, whose Behemoth Dances are (is? Must ask him whether second word is meant as verb or noun) due to be premiered in Moscow followed by first London performance in the Cadogan Hall on 12 May. He's just sent me score and preliminary sound which I look forward to seeing and hearing. We were attentive to the many splendid speakers, with editor Olly Condy kicking off with an amusing clip from Call Saul in which a character reads the first issue of BBCMM in bed, and James Naughtie being naughty as often, and presumably off the cuff with his wit. There were two oddities, though, whom I won't identify, but one seemed high as a kite and the other - well, I've got into trouble enough already referring to her as La Fragrantia (sexist? insulting? Not particularly, IMO), so let's just leave it at that. 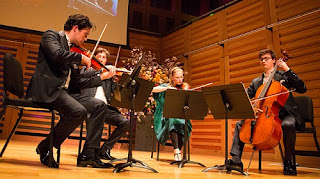 The two live performances were totally engaging - the Schumann Quartet (pictured above), voted best newcomer (though how do you decide when there are so many first-rate quartets emerging all the time?),  in the typically quirky, quote-conscious second movement of Ives's Quartet, and Tenebrae pitch and tone perfect in Bruckner's motet 'Christus factus est' (pictured up top; had to remind Stephen that we'd sung 'Locus iste' at his wedding to the marvellous Kate). Most astonishing for me was a film of Nick Daniel with two fellow oboists playing MacMillan's Intercession for that unique combination - not even Martinů wrote for it - in honour of the composer, whom it was good to see again in person. 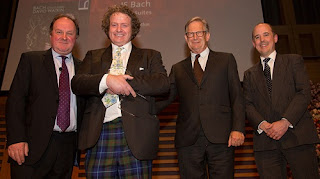 Best speech, no question, cellist Paul Watkin (second from left above in his Scottish Chamber Orchestra trousers - he's Welsh) claiming his award for the six Bach Cello Suites on Resonus Classics (have ordered them up). He stood up for music education in the clearest terms and  recommended learning about musical narrative from reading to children (claimed to have got through the entire Lord of the Rings with his kids); at least I know something about that from touting around Russian fairy stories to various godchildren with bits of music on cassette - that dates us - to accompany. John Eliot Gardiner's introduction was equally eloquent, showing how good he can be at heartfelt, precise tribute to a loved fellow musician. I had no idea at the time that Watkin can't play any more following diagnosis of an auto-immune condition called scleroderma; that adds post-event pathos, but it was touching enough then and there. 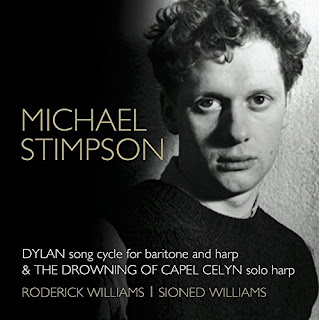 As far from perfunctory coda, let me sincerely hymn the praises of two discs I was sent by the performers or people close to them. If I hadn't thought much of them, I'd simply have kept stumm. That phenomenal harpist and most generous of human beings Sioned Williams had me sent a disc of works by Michael Stimpson, performed by her and the equally wonderful-on-both-counts baritone Roderick Williams in a recorded concert programme, part of which I'd been hoping to hear repeated at RIBA (in the end I couldn't make it). The Drowning of Capel Celyn I'd seen and heard in Sioned's 60th birthday concert at the Purcell Room. The song cycle Dylan is rich and varied, a marvellous introduction to some Dylan Thomas I didn't know, and all the better for the spoken passages (Roddy doesn't attempt to sound Welsh; Sioned's sing-songy native tone comes in useful for Mrs Cherry Owen). A beautifully presented disc, too. 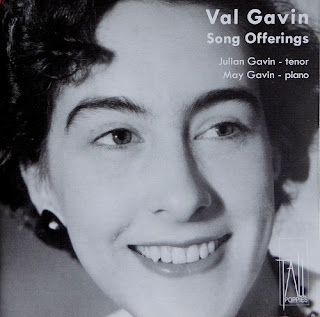 I won't say much about the other CD because Rebecca Franks at the BBC Music Magazine has just accepted it for review. The background is important: the best of all press officers during her long stint at ENO, Jane Livingston, sent the disc to me because she wanted to support Julian Gavin, the tenor who gave so many extraordinary performances at ENO and, indeed, the Royal Opera (I saw his Don Carlo on the night when Roberto Alagna wasn't singing, and loved it). The year after he recorded this disc with his sister May (both pictured below) he was diagnosed with encephalitis, which called a halt to his international career. Val, their extraordinary mother, died only three weeks apart from their father in 2013. 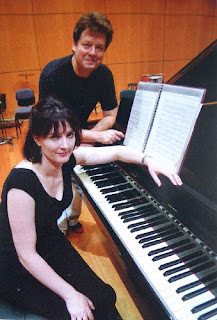 Even if you knew none of this, I'm certain that the extraordinary emotional fervour of Gavin's very distinctive voice - lyric verging on the helden - would impress; and the songs, too, are late romantic in style and yet, it seems to me, genuinely inspired at times, with melodic writing of truth and beauty. It's useful to have settings of Housman's A Shropshire Lad which offer just as much as Butterworth's. More in the July issue of the BBC Music Magazine. 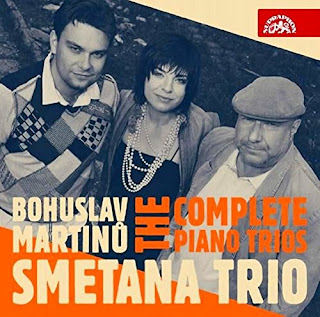 There, too, you should find my review of a disc which has sent me giddy with delight, the Smetana Piano Trio's recording of all Martinů's major works for that combination. This is already on my shortlist for best of year, and I can't stop playing the ecstatic dance-finale of the Third 'Great' Trio.
Posted by David at 12:20

My magazine with the awards results hasn't arrived yet, so I'm enjoying this preview particularly. I seem to recall I had heard some of the recordings, but now I don't know which ones! The ceremony always sounds like fun, too. So do I take it Stephen Johnson is also a composer? Will be eager to hear about his piece!

Welcome back, Sue. You will read in that very issue of Stephen's first efforts at composing an orchestral piece. He did write a string quartet a couple of years ago. And his training well equips him to do so. That major symphonist - and excellent writer - Robert Simpson was a tutor.

The ceremony was very entertaining, for both the right and the wrong reasons, and moving at times. But there was a lot of pessimism floating around at the drinks among the 'industry' folk. I said the brightest light in all this was the tireless resourcefulness of the young musicians you and I know. They adapt to difficult circumstances, and standards have never been higher.