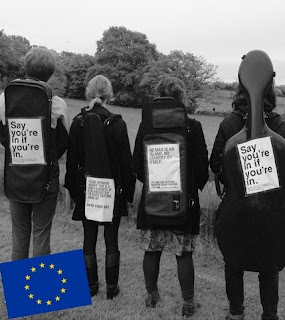 24/6 Any updates in the comments (do add if you feel like it). I haven't the spirit to put up another piece on this craziest of days.

My New Best Friends in the Gildas Quartet reacted with this photo to the Wolfgang Tillmans-designed T-shirt I wore at a fascinating mini-conference on press and young artists organised at the Goldsmiths' Centre in Farringdon by the City Music Foundation. I could only stay for an hour because I had to rush to get a tube, bike, train and bus to Garsington for what turned out to be a first-class Idomeneo (an opera, incidentally, by an Austrian about Greeks and the forerunners of the Turks with an Italian libretto, performed by Brits and one Australian, with a Swedish conductor, and I'm making a guess, though I can't find it confirmed anywhere, that vivacious assistant conductor and chorus 'master' Susanna Stranders is Danish).

That was a shame, since the CMF artists seemed like a lively group, and I know and admire several, like the pianist Samson Tsoy, already. The panel consisted of lovely Maddy Castell from the BBC (below, foreground left), Kimon Daltas, Editor of Classical Music and sometime contributor to The Arts Desk (right) and myself. The Gildas Quartet are on the left. 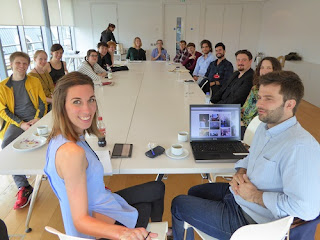 It was a rush beforehand, too - had to go and pick up two of the T-shirts designed by Tillmans by cycling via the Serpentine Gallery, where I had a lively chat with the very nice woman in the shop. She thought I should flout the 'antiquated dress code' of Garsington by displaying one or t'other, but of course in the end I didn't have the nerve, merely opening my white shirt to reveal the message to selected punters. Here are the shirts sported by model, the simpler message first 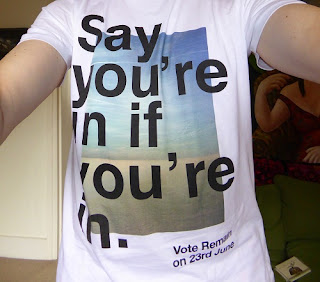 and the one I really like, which - since I took the shot in the mirror as the others didn't work well - needs interpreting: 'No man is an island. No country by itself'. I hope to get to wear it after today by simply adding a 'd' to 'Vote' at the bottom. 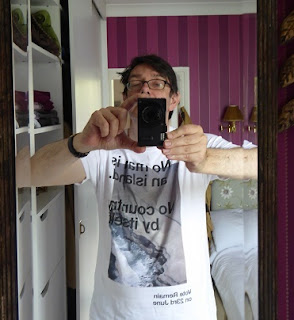 Worth adding a few more of Tillmans' manifestos to the ones I've already posted. The list of hostile names on the Brexit side has become more piquant, though of course Trump with his unequivocal support for Out - is he really coming to the UK today? - isn't there yet. 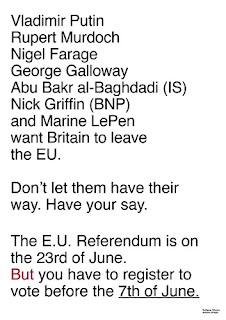 and the messages crystal-clear. 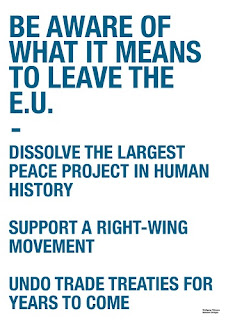 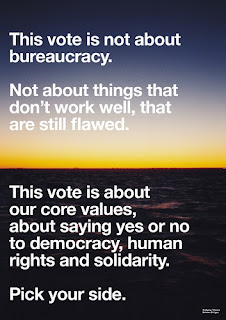 As a recent reminder of the darker forces at work, just read this on my main source of information about Russia, The Interpreter: some vile misfit has been insinuating to a state-owned TV channel that the murder of Jo Cox might have been a put-up job. Negativity knows no bounds. Yet in all the nastiness of the past weeks, there's been more resourceful humour. This one I like 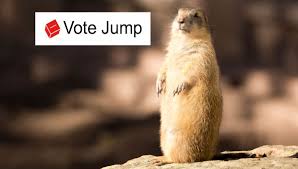 as well as one aimed at the oldies who are most likely to vote Brexit - 'Vote Leave on Friday'.

But enough - though it'll be on my mind all day, and at the first night of Jenůfa at ENO before we go on to some gathering or other. A few calming floral scenes from Garsington, which obliged with sunshine after the rains and before the big storm last night. 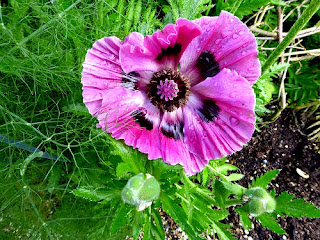 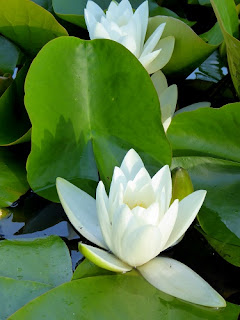 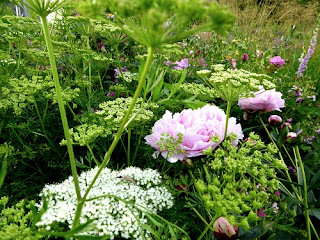 Finally, one good piece of news: Jonathan Bloxham, very talented cellist and conductor, and my guest at Garsington last night, has just been appointed Assistant Conductor at the City of Birmingham Symphony Orchestra. What a wonderful time to start, with Mirga Gražinytė-Tyla taking over as Principal Conductor; sure she'll be a wonderful mentor, too. Nice to end, as I began, with a take on the young musicians who give us such massive hope for the future.
Posted by David at 13:56

We live in a time when it has become acceptable to lie, beneficial to be selfish, harmless to disrespect others.

My instinct tells me we will be OK tomorrow morning. But my instinct was formed in the 1970s and seems to have no relevance or value now.

Is fingers crossed really the way we should be bringing up the next generation?

It all makes the emotional melt down at ENO feel relatively unimportant - and yet it seems all connected too.

As Arthur Miller said : 'We are all connected. Even the trees.'

Tell that to the Brexits!

Indeed, Mark, it's all connected. Lies, self-serving ambition and wilful ignorance versus trying to be a decent human being under flawed circumstances.

With you in spirit and in hopes for good news.

Thanks, dear Sue, supportive as ever. Your democrats sitting in Congress are just amazing. How my heart went out to them, especially the veterans.

I'm feeling more confident now. ENO's Jenufa has just taken us through horrors and out to the promise of a brighter future, and the mood on the streets seems to be positive.

Famous last words. The mood plunged with the Sunderland victory at which point I went to bed, didn't really sleep, and got up at 5 to terrible news. Where it will go from here will be...interesting. With nearly half the nation against the decision, there's much to fight for. Will people come to their senses when they see that the 'taking back of control' is not theirs?

Hello,
I need that t-shirt "no man is an island no country by itself", please help.
Where can i buy online?

Certainly, Alexander. E-mail mail@koenigbooks.co.uk - the shop is actually, as I think I mentioned, located inside the Serpentine Gallery in Kensington Gardens, open daily 10-6pm. They're very helpful if you e-mail them.

I intend to carry on wearing mine, maybe with a black mourning veil to go with it.