Only four days now to a referendum which may change our lives more profoundly than any general election has. With one of the most sickening murders I can remember symbolising the outcome of Brexit's more toxic side - for, regardless of the fact that the killer was obviously mentally ill, that movement's representatives may have smiled and smiled and yet been villains all along - the unease I've been feeling for weeks turned to physical nausea. And here I am in Aldeburgh, where despite the applause that greeted the sign of the European Union's Culture Programme supporting the Euro-opera I saw on Wednesday at Snape, Vote Leave and Give Us Our Country Back signs are everywhere*. In London we're living in a bubble. Much of the rest of the country thinks otherwise - and if it's Out on Thursday, sposo and I are out of Little England too, sooner or later, moving either to Scotland or Ireland.

Just a few reminders, then, of what's at stake. It's a unique case where negative campaigning is essential. In the short term, we'll get a Tory government that's more right wing and even less concerned with statesmanship than this one. Click on any of the photos for a larger image if the text is too small. 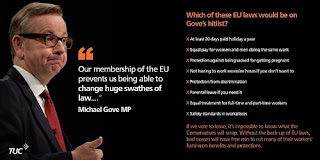 It's worth ramming home who some of the other spokesfolk are 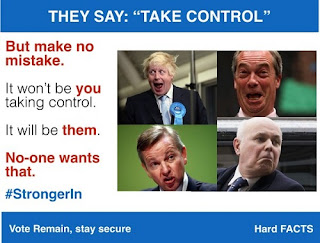 and who in Europe would like us to leave, for no honourable statesperson in the entire world does. 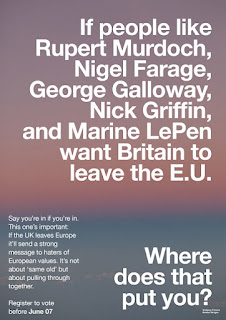 Not to mention the two biggest bogeymen, Putin and Trump. This, the excellent Wolfgang Tillmans' poster campaign, has also been positive 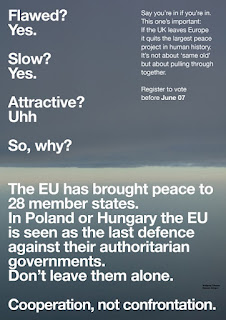 and so, too, funnily enough, was one Boris Johnson in his book The Churchill Factor (including the fact that, yes, much DOES still need to change about the institution of the EU, though one can quote plenty of facts to gainsay the 'inflated bureaucracy' charge). 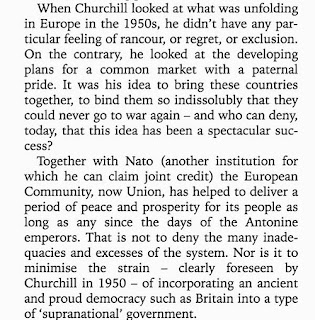 Unelected officials? Try Nigel Farage, the Royal Family and the House of Lords, for a start.

Dark moments along the way, one loosely connected and, thank God, that hurdle overcome, 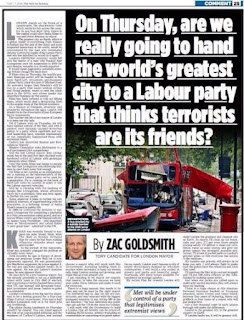 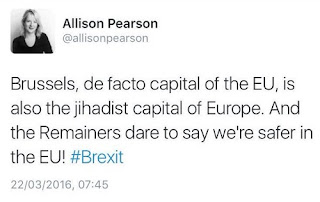 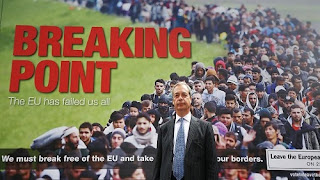 with its unequivocal links to a Nazi propaganda film. Update: someone recently pointed out that the band on the right above is plastered over the one obviously white face in the procession. 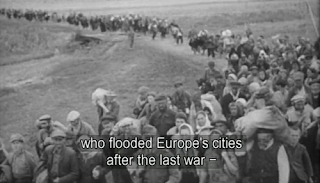 Among about a hundred things that are good about the EU, let's emphasis the human rights 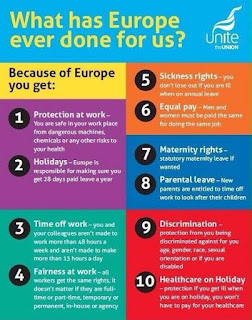 not to mention clean beaches and, more generally, the best environmental rights programme in the world.

Jessica Duchen has a very eloquent piece on her blog about what Brexit might mean to musicians. I'm disappointed that so few voices in the classical and opera world have made their feelings felt - especially in the light of their being ignored by the Remain campaign's very selective list of artists and writers. Anyhow, lest I weigh you down with too many cut-and-pasted facts here, go across to 'Elgar the European' on the blog for further links lower down that page.

And remember - though I fear that, like The Guardian, I'm preaching mostly to the converted here  - 'not everyone who wants to leave the EU is a racist, but all racists want to leave the EU'. Please let's not wake up to the possibility of a bunch of liars, careerists and psychopaths running the country on Friday morning.

Those of us whose natural home is not professional comedy, and who feel it's all beyond remedy now, should leave it to the superb Stewart Lee to inject some wit filled with savage indignation here. For anyone who can't be bothered to read the whole thing, this will do:

Leave had no arguments or facts, just pornographically arousing soundbites and lies they knew were lies, but which they calculated might stick to a wall in a depressed town somewhere, if flung with enough force, like compacted pellets of Priti Patel's shit.

Now I'm back to more Messiaenic birdsong at Snape. Good luck to all those kissing for Europe in London and other capitals: I'm with you in spirit.

Oh, and one good thing has just happened which I never thought I would live to see: our affable Prince Wills appearing on Attitude magazine's cover to stand up against bullying of young gay people. Kudos. 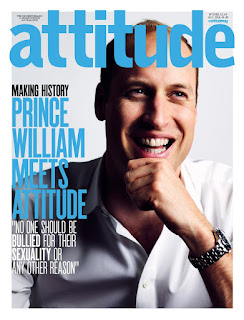 *I have no idea on which side the owners of the Wentworth Hotel, where I stayed in Aldeburgh, might be, but it's worth noting that this very comfortable hotel priding itself on traditional values overlaid with modern conveniences employed the most delightful Eastern European lady on reception, who could not have been more attentive. What would happen to the hotel trade without the Poles and other workers moving freely between EU countries who staff the establishments and usually turn out to be the most polite of people?
Posted by David at 11:18

Much as one might be able to analyze all this intellectually, it remains unfathomable. Elizabeth Drew wrote of our situation in the US that "Stirring up grievances is an easy political trick, but once set loose, the grievances are hard to tamp down." It seems Brexit has done the same in England. It is heartbreaking and heinous that Jo Cox, who stood for all that is decent and good, should have lost her life to hate.

That phrase is perfect. So is a very long article I've just been reading, between Pierre-Laurent Aimard's four bouts of Messiaen, in my hotel room at Aldeburgh after a delicious bathe (all this a long preamble, sorry). The article is by Dave Eggers and describes in detail his experience of a Trump rally in Sacramento. After having devastatingly rejoindered everything that Trump and the rather gentle people he talks to has said, Eggers notes how the half-full stadium has been slowly emptying while Trump gets down to a specific or two:

'These people had arrived at 4pm, had waited three hours and now, at 7.30pm, they were leaving. Trump was still talking, but they were not worried about missing anything he would say, because they did not care. They had seen him, heard the zingers, taken a picture or two, and now they were heading to the parking lot, to get a head start on the traffic'.

David I'm at a loss for words on so much that is happening in the world. That quote from Elizabeth Drew sums it up. We can only hope that common sense will prevail.

While I live in hope that sense will prevail both for us and for America, Will, I feel so shaken by the knowledge that while decency, kindness and generosity are abundant in the world there is no common core of anything any more. Too few people want to listen to facts and take any responsibiity: life as a game show?

All will be well

I wish I shared your confidence, Liam. Even if it's Remain on Friday morning, the divisions here will remain ugly for a long time to come.

Not quite as black and white as that, Graham, and I did say 'much of the rest', not 'the rest' (look at any map which delineates majorities by colour. You have to get to Scotland before Remain takes over - and actually, by 'this country', I wasn't including our very good friends in the far north).

I speak only from experience. It's a shock to leave the city and find these to me very dismaying posters everywhere. 'Give us back our country'? Who on earth took it? 'The bureaucrats in Brussels' never had any such desire. nor is it 'their' rules which are hampering 'us'. I hate what's happened in the last few weeks, or been waiting to happen, to this country.

Point taken! I'm not seeing many posters at all where I live, just one union-jacked eccentric sat most days outside the local Yorkshire bank dispensing Brexit leaflets. Quite why so many farmers want to leave is a mystery - surely many of them will be stuffed were subsidies to disappear.

So many people in all walks of life will be stuffed. Most just don't seem to care about the facts or the inconsistencies. Brexit's is not a logical line in any way. I hate the 'head or heart' argument - I hope I use my head to inform my heart as a passionate European.

The 'end of subsidies' is just yet another example of the amount of misinformation from both sides. I'm old enough to remember - and to have filed for my father - the paperwork in respect of the deficiency payment scheme which pertained in the UK before we joined the Common Market and, thereby, CAP. So it is perfectly possible that subsidies could continue - though not necessarily in their current form.
The USA has a system of subsidies. It is equally possible that a UK outwith the EU could choose to go down the New Zealand route of no subsidies. The EU could yet opt for no subsidies - the balance of emphasis between production and environmental stewardship could easily shift further from production.
And to think I had to go through this only 21 months ago! Weep! I envy that 18 month period in Belgium when they didn't have a 'government'.

Let's not pretend, though, that the 'amount of misinformation' is equal from both sides. As I don't understand the complexities of many of the economic arguments, my unshakeable Remain instincts stem from the human and environmental rights which a Johnson government would dismantle even more than the present one has already tried to do. And the free movement of EU citizens which has brought so much that is positive - far outweighing any negatives - to us and others.

What a depressing period we are living in all across the globe... I guess we should be thankful for being able to still appreciate the beauty of the culture and music in this world.

This weekend the gay pride march in Istanbul was banned over security concerns. With reference to the photo you posted at the end of your Istanbul piece, the symbolism of rainbow umbrellas is certainly known here but what you say in your election piece is so true: in London or in Istanbul, we are living in bubbles and the reality outside of it can be quite ugly and unbearable…

I deeply sympathise with the cosmpolitan Istanbullus, as I have just learned from Orhan Pamuk to call you. And I was horrified to read of the angry mob attacking a group of folk gathering in a record shop to hear the latest Radiohead CD. Such times, such times. But here and perhaps even in America we're luckier in that it's turning into a 50/50 battle of enlightenment versus hate and prejudice. I never thought I would have to fight this hard for everything - gay rights included - we have taken for granted over the past few decades.

Well today is the day, I am like you are waiting to hear the results. Hopefully the final results will be what you wish for.
Thinking of you and J.

Cautiously optimistic, I think, but the recent weeks have been such a shake-up and the country will not be a happy one, whatever the result. But yes, we'll dance if Remain wins.