Always makes me a bit tear-y when everyone stands for the European Anthem, aka Beethoven's Ode to Joy, at the end of each Europe Day Concert, and all the more so watching this version with a difference. Stick with it beyond the first statement.

For 2016's event at St John's Smith Square we had the European Union Baroque Orchestra led by Rachel Podger and singers from the European Opera Centre in Liverpool (more usually partnered by the European Union Youth Orchestra. I'm sorry that the EUYO's admin couldn't trumpet the long-postponed result that the EU itself decided to save them as loudly as they proclaimed the initial disgrace). 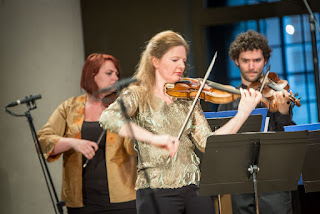 La Podger is such a born communicator as well as a great stylist, and though for me a little Baroque goes a long way there were treasures here, especially when she played solo or in duet.

It's not usual that the obligatory anthem finale is the highlight, but thanks to Andrew Manze's Rameauification of Beethoven, this one was. 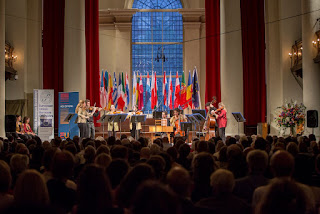 Who knows if there will be another such event next year? There's still much to hope for, which is why I'd change the title of Schiller's An die Freude to An die Hoffnung. The classical music world is weighing in - finally (not enough solidarity during the campaign). Jasper Parrott wrote an eloquent letter; in this Guardian article the Guildhall School imagines what its orchestra would look like without its full European quota.

Now let's have a series of parliamentary votes - including one to get rid of Corbyn, in whom I'd placed some trust but whose heart clearly wasn't with Remain - and an early general election. There's no way at least half this divided country is going to accept the self-perjuring Boris Johnson as Prime Minister. Theresa May is no alternative - let's remember this nasty piece of work wants us to withdraw from the European Convention on Human Rights, for which she has been rightly excoriated again by the only strong leadership voice in the entire country (as it currently stands), Nicola Sturgeon  - and God save us from that other grinning goon Jeremy Hunt. Wasn't too sure about the wisdom of a second referendum - there may be more violence on the streets - but have just been reminded that Ireland and Denmark 'did it again'.

In the meantime, I am beyond disgust with the pondlife - sorry, dear frogs and freshwater creatures - once known as Nigel Farage. Complained to The Guardian for their putting up his speech in full and not those of the honourable Germans and Scot this morning; they took my point and replied - very swiftly, it has to be said - that they had limited space. I believe strongly that alongside due process this petition to prosecute an unelected monster for his horrific neo-Nazi poster should be signed.
Posted by David at 11:06

Dear David, I am generally still horrified, and have been since the day after the referendum, with the outcome. I have signed a number of petitions already and I'm certainly in sympathy with action against Farage.

No petition which I have signed has been addressed to the Houses of Parliament and its members of parliament. I continue to think that MPs and members of the House of Lords should be petitioned to vote along the lines of their positions and beliefs concerning membership of the EU. There seems to be overwhelming agreement that whatever is done in connection with leaving the EU must have the agreement of Parliament which is the only legal authority to pass Acts of Law.

It is also understood that the referendum was an advisory referendum and has no binding political power.

Maybe the likes of Boris Johnson, if it were to come to that, will not have the guts to try to invoke the Lisbon Treaty (which he clearly did not understand based on his first statement after the Brexit itresult, believing that Britain can have all the advantages of Europe, pay no money towards it and have a points system of immigration on top of that!) But surely he can be stopped by Parliament.

Do you know of any petition which deals with this point? If not, David, would you and any others share in trying to create such a petition?

Dearest Edward, the situation was clarified for me by a lawyer speaking on the World Service just now. He claimed that the only way to undo the first referendum is to have a second referendum. BUT this must be ratified by Parliament first. It's odd, though, I've Googled for a petition precisely to address the issue you mention, and there doesn't seem to be one. Everyone needs to contact his or her MP; there's no doubt which way mine, the superlative politician Andy Slaughter, will vote. He's just resigned as Shadow Justice Minister - solid gold to Gove's dust and ashes.

I hope I don't embarrass you, Edward, by spelling out to everyone that ever since you left Vienna on the last Kindertransport, you have been the archetypal immigrant who has contributed inestimably to our country. Long life to you!

David: My thoughts are with you and J and all right now. I know you will keep up the good fight, and dearly hope the forces of common sense will prevail.

Dear Edward, Is this what you're looking for? http://www.breentry.co.uk/

Thanks for solidarity as ever, Sue. And thanks for the link, Sophia: I checked and it's to ask your local MP to fight for a vote in Parliament. I've already emailed mine twice and always know where he stands - the fabulous Andy Slaughter, usually ahead of the game. Resigned from the Frontbench yesterday, since Corbyn has become completely untenable (yet on he clings). Andy's letter of resignation was a model of fairness and clarity.

So there IS a legal chance to overcome the recent referendum result. You have my full support.

Were I a British citizen, I would join any reasonable action in this respect.(Btw, I have read the official reaction of the EU presidency to the referendum result - it is a long-winded ambiguous document written in the same EU-newspeak as usual. This is one of the things to be changed.)

Meanwhile, the Czech president and one of Putin's friends in Europe Miloš Zeman opened the question of a 'Czexit'...

The future is unclear...

Thanks as ever, Jan. When we were in Prague recently, I was shocked to learn that many Czechs - a majority - supported Putin and scorned the EU. And no-one ever hears about the Czech president given the worse behaviour - so far - of the neighbouring leaders...