Into Wagner's realm of night 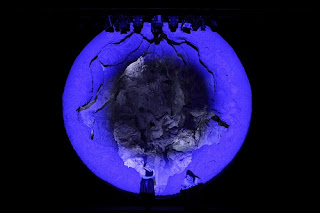 The end of the above scene in ENO's Anish Kapoor-designed Tristan and Isolde, as photographed (like other images from the production) by Catherine Ashmore, is where we've reached in Class Five of this term's Opera in Depth course at the ever welcoming Frontline Club. Brangäne has extinguished the torch and we're ready to send the lovers into each other's arms this coming Monday with Albert Coates' frenetic 1929 excerpt featuring Frida Leider and Lauritz Melchior. Let the Liebesnacht begin!

It's daunting to realised that one could spend at least three times ten weeks on this fathomless and perhaps unfathomable masterpiece. I spent two hours alone last week on the opening scene of Act Two so we'd better get a move on. We also have two visits coming up - the first from Linda Esther Gray, the second from Sue Bullock and (hurrah, just confirmed) Anne Evans. 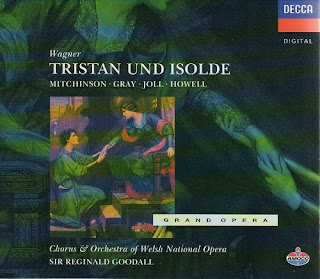 Having never previously listened to the Goodall studio recording in detail, I hadn't quite appreciated how it's his finest Wagner, for me at least: in Tristan, and possibly (just) Parsifal, I can take slow tempi so long as the music always burns (which it did for Goodall; alas, Ed Gardner doesn't get away with the extremes at ENO - Isolde's Act One narrative is the first of several places where the tension drains away). 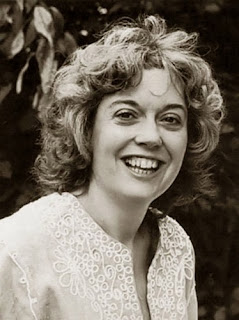 And, yes, I know and love her as a friend, but I think I can be objective enough to say that Linda (pictured below in the Welsh National Opera production) is one of the three Isoldes to whom I constantly return for the music examples - the other two being Margaret Price (who of course never performed the role on stage) and Birgit Nilsson. Flagstad? Too weak on the Beecham recording, too matriarchal for Furtwängler;  I must get hold of the Reiner. 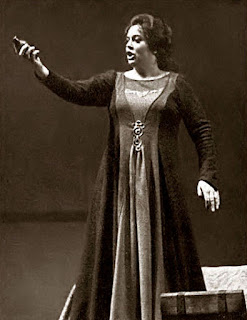 It's unfathomable that the Goodall studio Tristan, only once released on CD in mid-price format, has stayed out of the catalogues so long. This is for me the greatest love duet of them all, and how it burns towards the crisis. Ah, some will say, but you need to have heard the live performance sung in English. I did, at a time when I was too young to appreciate what I was getting, but now there's another chance: amazingly, someone has put up a Radio 3 broadcast of one of the ENO performances I must have seen on YouTube. It's Remedios* rather than Mitchinson, a seriously underrated tenor, but that's no drawback. Maybe you will have listened to it before I have a chance.


Other glories include Stokowski's music-minus-three Liebesnacht (with bits of Act Three thrown in for good measure), strings portamento-ing like crazy but the freedom and rubato just magnificent. 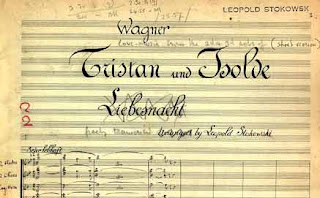 As for the ENO production, well, read what I thought about it on The Arts Desk: a mixed bag, as anticipated, but with a magnificent performances from Stuart Skelton (the best Tristan I've seen on stage - I missed Vickers, of course). He's amazing, as he must be, in Act Three, the best staged of the three with an incredible video-projection effect of dark blood streaming back and forth between the vulva-like bit of rock and the pyjamaed old Tristan. 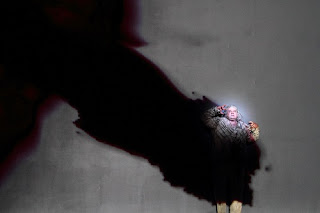 Equally fine are Karen Cargill (Brangäne, just possibly an Isolde in the making despite being a mezzo, but she must sing Berlioz's Dido first) and Matthew Rose (sorry, Peter, he really is very, very good - not better than you, just different - and Kramer's production gives him a hard job). Kapoor's second and third act designs work hard to combine with Kramer's visions, though the costumes are a bad mismatch. I'm waiting to see an opera production this year that has anything like the coherence of Ivo van Hove's Kings of War or the riveting Huppert/Warlikowski Phaedra(s) which knocked me for six at the Barbican last night. If everything in the ENO Tristan had joined up with Kapoor's theatrically workable (just) vision pictured below, it might have come somewhere close. 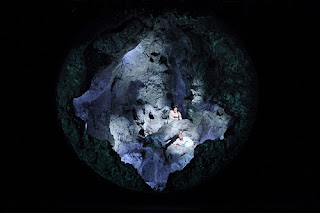 All that remains to be added is that it's cheap journalism to claim that on this production rests ENO's future, as I've seen colleagues who should know better write and say. The artists have nothing to prove - they've already won three awards this season and turned in superlative performances of Lady Macbeth of Mtsensk, The Force of Destiny (which has just won a Sky award, though on account of Bieito's very messy production I'd have given it to Tcherniakov's Shostakovich) and The Magic Flute this season. And if Kramer comes over as having lots of good ideas and not yet the wherewithal to connect them, that has little to do with how good an Artistic Director he'll be. In conversation with Tom Service on Radio 3's Music Matters, he came across as a little OTT in his 'I'm so passionate about...'s, but again, with strong observations in among the apparent gush. Let's give him a chance, and see if he can undo the ills and banish the strange aversion to fundraising of the Pollock regime so far. 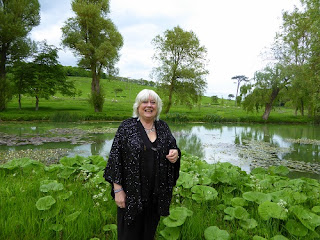 By way of peaceful coda, here's Linda at the Glyndebourne lake the other weekend. She came with me to a well sung but production-wise not very funny Barber of Seville (I'm pinning higher hopes on the forthcoming Béatrice et Bénédict). We felt the same about it. Very pleased to have met the very promising and affable new Artistic Director, Sebastian F Schwarz, who showed up at the press drinks - full marks for that - and had the benefit of Linda's wisdom. I hope by now he's listened to the Goodall recording, as he said he was going to do, and been amazed.

*14/6 Update - I only learned from Linda this morning that Alberto Remedios died on Sunday. Tomorrow's ENO performance is being dedicated to him. Just listening (rather than listening and watching, which I did a fair bit - great Walter in Meistersinger) makes me realise what a golden sound it was, and very youthful.
Posted by David at 13:13

I've never seen Tristan und Isolde, but will fill this gap in my opera education this fall, in a new production at the Met. Very pleased to read this post, then, in anticipation.

Before that, Sue, you need to get the Goodall studio recording (not so hard to find on the internet despite officially being unavailable) and maybe a Dover score - Tristan repays infinite headwork and never disappoints the heart...

Who's your cast to be?

David: Production by Mariusz Treliński; Nina Stemme as Isolde, Stuart Skelton as Tristan, Ekaterina Gubanova as Brangäne, and René Pape as King Marke, with Sir Simon Rattle conducting. I'll look for the Goodall; the score would be way, way over my head. Too bad I can't take your course! PS: Went with J and 2 friends to Barry's Earnest. Everyone loved it; of course it was supremely well done in every respect. I suspect you'll find this so far off base on my part as to be a real puzzlement, so begging your indulgence in advance, my shorthand for the music was a sort of "Berg meets Buffa." I have a hunch had my mates heard the music only, it would not have gone down as well, so here's to Gesamtkunstwerk!

The cast: excellent. Rattle: hmm. At least he's had some experience of conducting it now. Trelinski: bad luck. Most perverse Onegin I've seen for a long time, though maybe he'll do something more interesting with relative abstraction. I had almost mixed him up with another Polish director, Warlikowski, who gave us a stupendous 'Antigone(s)' with the amazing Isabelle Huppert on Friday, Warlikowski's would seem to be some intellgence.

I'm relieved you all loved Earnest: Parterre queens including the site's spiteful doyenne did not and even claimed it was dead unfunny, when my experience was totally the obvious.

The music is rather compendious, I feel - very tuneful and Stravinsky like in places, lugubrious in others, Cageian elsewhere. What connects everything are repetition and (to me hilarious) word misstressing, which is also there in the Beethoven monologues of Barry's I'm listening to at the moment.

David: You may be amused to know that when I first read your comment on Rattle, I read it thusly: "At least he's had some experience of conducting now."

The funny thing is that the more experience of conducting he has, the less convincing in my books he seems to be. I preferred him in his CBSO days - or maybe it was me who was callow then...