She Loves Me: I liked it 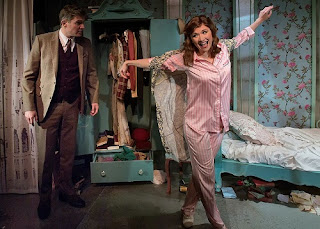 Which is more favourable as a three-word review than 'Me no Leica,' Walter Kerr's famous verdict on John van Druten's I Am a Camera (basis, via Isherwood, for Cabaret). But there isn't a lot more to say about the Menier Chocolate Factory's latest exquisitely staged musical. I'm going to say it anyway. Matt Wolf has already hymned the show on The Arts Desk - which is why I booked - and our resident photographer Bill Knight provided the images. He let me choose from a wide selection here, for which I'm very grateful (pictured above, Mark Umbers and Scarlett Strallen).

The problem lies in the mostly anodyne songs by Jerry Bock and Sheldon Harnick (though the book, by Joe Masteroff, is good, and preserves the detail in the conceit that a love of great literature draws the two principals together, sight unseen). I don't suppose anyone's seen Miklós László's Illatszertár (Parfumerie), but if you don't know the most charming of the films based on it, Ernst Lubitsch's The Shop Around the Corner, in which Jimmy Stewart spars with Margaret Sullavan, rectify that omission immediately. Bock, Harnick and Masteroff are more faithful to the original, keeping the setting as well as the Hungarian names (Bock had Magyar roots). It was a clever idea of Matthew White's production to give everyone British accents, from the Cowardesque RP of the main lovers to Cockerney for the brash blonde who ends up with an Arthur Milleresque infatuation and Welsh for the delivery boy. 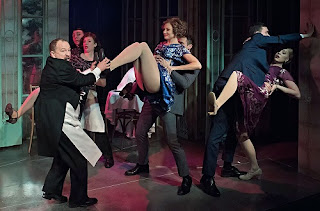 Trouble is that I was expecting something more sophisticated. She Loves Me premiered on Broadway in 1963, not so very long after the most articulate of all musicals, My Fair Lady, and it seems that Bock and Harnick held out for Julie Andrews as the heroine (they got Barbara Cook instead, not a bad deal at all). I can see why Menier chose it: both a good seasonal item - the 'Twelve Days to Christmas' shopping number is a treat - and a chamber piece with a couple of virtuoso ensemble numbers brilliantly choreographed by Rebecca Howell ('Tango Tragique' pictured above). Paul Farnsworth's sets revolve beguilingly and all the roles are well cast. 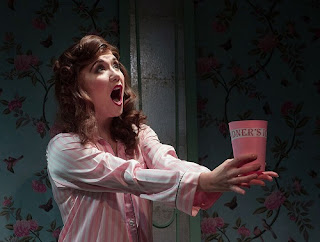 And yet.... I waited in vain for a witty number to evolve, or an argument to be properly set to music, in Act One. Something like it happened in the finale at the Cafe Imperiale, where shop girl Amalia Balash waits for her epistolary lover (none other, of course, than her envious, angry fellow worker Georg Nowack): the idea that this is a dive with tray-dropping waiters and bad food which prides itself on creating an aura of romance is deliciously exploited. Act Two is better - not often the case with musicals - and there are four strong numbers in a row, starting with the only one whose tune I can remember, 'Vanilla Ice Cream' (Strallen singing it pictured above), the would-be-lovers followed by the shop Lothario and his betrayed gal. 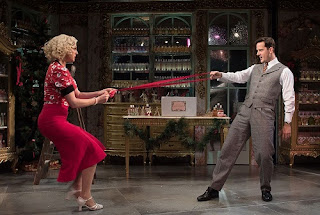 Everyone is right for the specific part. Mark Umbers was a given quality following his triumph in the Menier Merrily We Roll Along, and Scarlett Strallen is a real soprano with a secure top and a pretty look of exasperation (of course both are way too good looking for ordinary people, but that's musicals for you). Katherine Kingsley has an endless inventory of comic gags as the brassy Ilona and Dominic Tighe is a convincing cad (the two pictured above). I was surprised to find out it was Les Dennis who found shade in the tragicomic Mr Maraczek and I also couldn't quite believe that Calum Howells, with his winning bright grin, is only 17, which would be right for the role of the eager-to-please Arpad. They complete the below ensemble along with Alastair Brookshaw as the decent Ladislav Sipos (second from right). 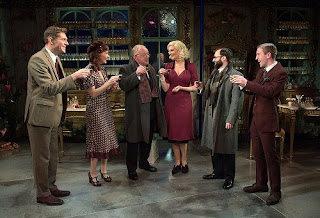 So yes, in the end I succumbed to the romantic warmth of it all. But not much thanks to Harnick, who despite friendship with Stephen Sondheim, ain't a patch on him (though who is, since Loesser, Lerner and Jule Styne?) Just one thing bugs me at the Menier: the use of insensitive amplification. I can't see why it would be necessary in this of all shows, and it made an especially horrid mush of the excellently played, quasi-tziganish violin solos - a wry reminder that Bock and Harnick also wrote the much more laborious Fiddler on the Roof.

Next indulgence in home cinema, at any rate, will be The Shop Around the Corner, which I haven't seen for maybe 20 years and ordered up the minute we got home. 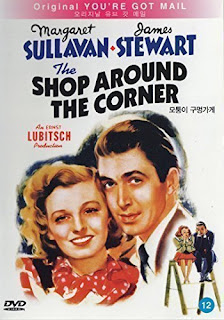 And I did the usual twixt Christmas and our departure for Amsterdam on the 28th, which was to play my two favourite show albums, the original-cast My Fair Lady and the London line-up (glorious Imelda Staunton included) for Into the Woods, one of the best-produced musicals on disc ever. And on stage, directed of course by Richard Jones, with whom I spent an intriguing morning in the V&A cafe yesterday as a kind of unofficial dramaturg for a project (maybe hush-hush, maybe not, I'd better ask) on which he's embarking. Not a musical, but even if you might miss the songs the latest subject he's treating on the London stage really ought to be turned into one (silly young Hart turned down an offer from Irving Berlin, of all people). That's the visually brilliant Young Vic handling of an ephemeral charmer about Hollywood's transition from silents to sound, Once in a Lifetime. You have until 14 January.
Posted by David at 17:44

Well you can count me as someone who has seen Parfumerie howbeit in translation. Soulpepper, one of the best rep companies in North America in my opinion, has done it several times and I finally was able to catch it last year. As I mentioned in a post I put up several weeks ago - the play gives more depth and time to the other employees in the shop particularly the Maraczek subplot. It really is a delightful play and I wonder at it not being done more often.

Laurent saw the original London Into the Woods during one of his stopovers when he lived in Cairo. I remember him talking about it for the longest time particularly all the doors in the set.

Golly, I'm impressed. Though I did subsequently read that Parfumerie was put on in Paris and won all sorts of awards in 2009. Forgive me, I must have skim-read that entry and promise to go over it more carefully.

I went to the Jones Into the Woods twice. The second time I persuaded my hitherto sceptical friend Stephen Johnson - he of the Freud versus Music radio programme in which I participated and which I've just heard, excellently put together - to come along. He was bowled over. Having seen two more productions and the film, which is amazingly good despite some cuts and changes, I think it's my favourite Sondheim, or at least the most durable, since much as I love Sweeney Tood I may have overdone it and need to leave it alone for a couple of years.

David, what a good way to begin the new year! Not many people seem to have seen The Shop Around The Corner, so it's pleasing to find that you enjoy it, enough to watch it again. Possibly the pace of that version might seem a little slow today, but the comic timing is wonderful. I wonder whether you have also seen the remakes - In The Good Old Summertime with Judy Garland and Van Johnson, musical, and more sprightly; and You've Got Mail with Tom Hanks and Meg Ryan, downright peppy? A fan of movies where people make connections, most especially unexpected or even improbable ones, I can enjoy all of them. It's also what I love about the internet, and about the way you conduct your blog. How else would I ever have encountered you, and your writings, and in a format in which you invite conversation? I hesitate to say that I'm thinking of a catch-up post, but the past year really does have to sink in, and the post has to cook. I do have your email and can let you know when it finally occurs. Meanwhile, I continue to come here and read your own. Wishing you all the best in the new year! -- Elizabeth

Wonderful to hear from you, Elizabeth, and how nice to find fans here both of Parfumerie and of The Shop Around the Corner (the former, I imagine, somewhat rarer than the latter). Still waiting to see it again on the copy I ordered up; The Other here has been inflicting a not entirely meretricious series about people around the world connecting called Sense8 which has now come to a halt before the next episode of series 2 so we should be able to sneak the comedy in between.

I hadn't realised until I looked up details of the other films on the subject that the Garland vehicle In the Good Old Summertime was another variant - yet to see it, ditto You've Got Mail. If you like them both I'll hunt them down.

All best for 2017, and looking forward to your next post. So long as all's well, I'm happy.

Uh-oh. I'm a little uneasy that you may find You've Got Mail a bit too cutesy. At least, look at a trailer or something on YouTube, first. If you enjoy old Judy Garland musicals, that's a safer choice. She's always so compelling, as well as talented.

On the subject of sneaking comedy in between more serious viewing, my neighbor B. invited me yesterday to begin with tea and continue to wine and the first episode of Grace and Frankie, which her cousins have recommended. She has since learned that the series has already finished two seasons, so google found a site where it may be viewed free online. Only two episodes in, Lily Tomlin has already completely won my heart, and it may be just the thing, when a moment's respite is called for. -- Elizabeth

I adore Lily Tomlin, but I have to say that one episode of Frankie and Grace turned me off. I know it's really supposed to be a two hander for the women, but the men were such ciphers.

Now have both those films purchased cheaply, so shall watch for sure and let you know.