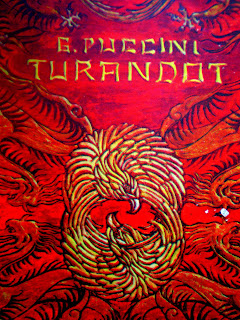 Sounds like they're making quite a meal out of Turandot at the English National Opera, though whether a splendid banquet of fresh horrors or just a bubble-and-squeak remains to be seen (by me, at least, not until mid-November). In the meantime, heading our tributes to several new productions in town this season, I've started the City Lit Opera in Focus course with Puccini's swansong, going on this term to Bluebeard's Castle and Cherevichki (of which more when the time comes). Above is a detail from the cover of my treasured first-edition vocal score, probably not worth anything (I bought it for £2 in Edinburgh's Westport Books back in the 1980s) because they were produced in the thousands. 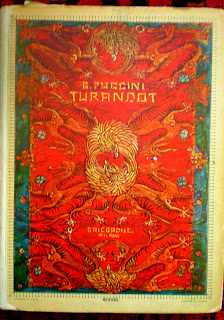 It always takes me aback how much more there is to look at in a Puccini score than I ever remember. Here, before we even got to arias and interpretations, I had to deal with tritones, bi- or poly-tonality, polyrhythms, newcomers to the orchestra (those Chinese gongs, probably taken over from Strauss's Die Frau ohne Schatten) and, of course, the forerunners. So we spent the first class on Gozzi's 1762 'fiaba Cinese teatrale tragicoma'. There's a clear and vivid musical starting point with Weber's incidental music of 1809 and the funny little pentatonic march which Hindemith skewed and jazzed in his Symphonic Metamorphoses. Later, along came Busoni with music for Max Reinhardt's 1911 production starring Gertrude Eysoldt (whose Salome and Elektra inspired Strauss) as Turandot and Alexander Moissi as Calaf.


Quite why the little neoclassical opera Busoni made out of Turandot a few years after that doesn't get staged more often I don't understand. As I said to Vladimir Jurowski, it would surely be a hit at Glyndebourne. It's the opposite of Puccini's heated late romantic monument, dim sum indeed to the later lavishly stuffed pig's head, and much closer to Gozzi in spirit. It first turned up as part of a 'new commedia dell'arte' double bill in 1917.

Then, following Meyerhold's cue and the Gozzi-worship of his magazine The Love for Three Oranges, Vakhtangov staged his own adaptation of the play in Moscow in the early 1920s. That production was running in the Vakhtangov Theatre's rep in the 1970s, and may be still for aught I know; but I doubt if I'd have had the chance to see it had not Jurowski transferred to DVD an old video for our Glyndebourne study day on Prokofiev's Betrothal in a Monastery. The whole thing is done with wit and esprit, backed up by an orchestra including ladies 'playing' comb-and-paper in various cabaret numbers, spoofs of Tchaikovsky's Swan Lake and so on. Pantalone, Tartaglia and Brighella, the clowns whom Puccini turns into Ping, Pang and Pong, very much dominate. The first two are pictured here. 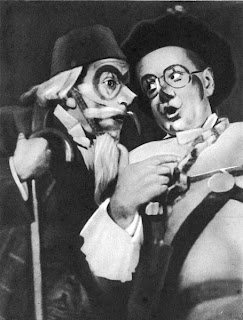 Finally we came to Puccini's astounding score. I'll pass over the orchestral wonders and skip to the comparative listening we managed to do yesterday. For 'Signore, ascolta', with its pentatonic gift to be both simple and exquisite, we threaded together Callas in recital, Margaret Price, youngish Scotto and Mary Plazas for the final float. I wanted to show the class Shcherbachenko's winning performance at Cardiff, which I can do now thanks to YouTube. The sound quality is distorted, which is a shame, but you get the expressive message.

Then Calaf's response, 'Non piangere, Liu', came in rather more historic packaging: Charles Kullman, Joseph Schmidt, Aureliano Pertile - Toscanini's favourite tenor who could well have sung in the premiere, though he didn't - and Franco Corelli, whose final top B flat is the most thrilling and dangerous. Then we put together the whole sequence, the finale of Puccini's first-act four-movement symphony. And who else could it be but Caballe, Pavarotti, Ghiaurov and the LPO under Mehta? That Decca recording still, after all these years, strikes me as fairly unsurpassable, for all the passing quibbles one might have. It should be any newcomer's first opera set, surely. And we haven't even got to one of Sutherland's finest and most unexpected achievements. 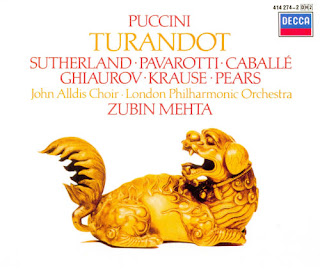 The class burst into spontaneous cheering at the end. And all this was more apt than we knew, because yesterday, I subsequently learnt, great Luciano would have been 74. Was that the most sheerly beautiful-in-a-golden-way tenor voice ever?

Anyway, I'm very curious about Rupert Goold's ENO production. As the opera is hideously violent and not a little sadistic, I think the solutions could work. Though when told some weeks ago that it was set in a Chinese restaurant, we laughed incredulously. Well, never write off something until you've seen it carried through. For full picture width, I think you have to flip over to the YouTube setting.

Thought you might also like a potted video (made for the Rome showing) of La Fura dels Baus's Grand Macabre. This gives all the highlights of model Claudia's transmogrifications.

I took the point that students who hadn't seen the Big Mac before were confused, and wanted to hear the music better as they felt it was swamped by the stage business. Fair enough, but for those of us who already treasure the score, the ideas always seemed to serve Ligeti well. And I'm delighted it packed 'em in at the Coli; the last night was sold out.
Posted by David at 11:00

The Mehta Turandot was my first opera set, or at least the first I bought for myself. I was 13.

The ENO Turandot represents another rite of passage- it's the first major operatic production I can recall which is directed by someone who was IN MY YEAR at University...

Lucky you, Jon - what a way to start. I think the first set I bought for myself was the Boskovsky Fledermaus with Gedda, Fischer-Dieskau, Rothenberger and Fassbaender. Not quite so dramatic a beginning.

Are you a friend of Rupe's, or curious enough to see what he makes in his first stab - sounds like the operative word - at opera?

Great to find this... this morning I was walking to work and listening not to the Mehta, but to the thrilling Karajan DG recording. Domingo for me every time. Nothing beats Karajan's seismic Act 1; the hush of Act 2 is incredible (though occasionally Katia Ricciarelli even finds it hard to sustain the languorous approach) before a totally thrilling Act 3. The close is the most convincing advertisement for Alfano, with the Vienna trumpeters totally unbeatable.

Thanks, Gavin, you've prodded me to revisit the Karajan; I was too much swayed by the bizarre casting of Ricciarelli. But his recording of Tosca with her and Carreras is just swooningly gorgeous, and I'm a sucker for the attenuated Butterfly and Boheme.

You mention a DVD of the Vahktangov production---do you know how I might get a look at that? thanks for those beautiful playbills....

Only, I think, from me or Vladimir Jurowski (as he very kindly made me a copy). I'd be happy to let you see it, Joan, if you don't mind leaving a contact. If you'd prefer not to, you could write to me at the City Lit.

Joan - I subsequently found your site so I've left a message.

The Karajan is very swoony... I love the control of "Padre augusto, conosco il nome dello straniero!" - it's hushed, shimmering and played like Korngold!

Oh dear - to reduce Puccini to Korngold would be too much. But I touch a nerve there. I can enjoy Die Tote Stadt in the right mood but I draw the line at Das Wunder der Heliane. Never again...as you say, we can't agree on everything but at least we care about what we love (I see the murk has gone from your list, if you know what I mean).

Not comparing, just finding some of Korngold's iridescent shimmer in Alfano's conclusion. Though I would prefer DAS WUNDER DER HELIANE (even) over Alfano (proper) any day.

Murk has indeed dropped from the list. I think the lesson learned there is don't believe your own press.

Agreed. And I've sat through Risurrezione...

Mind you, Alfano, overblown as he is, sounds a lot better if his final scene isn't cut. There have been several attempts to restore the finished version. Last one I heard was on a Dame Jo Barstow operatic scenes disc, long deleted.

And the Berio end is such a mess. You need blazing resolution, however overscored.

A pity Korngold didn't write his own version of the last act. Personally I think Turandot should personally behead Calaf after making love instead of the soppy Woman's Weekly version we usually get.