Images and sounds of war 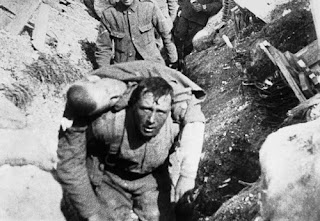 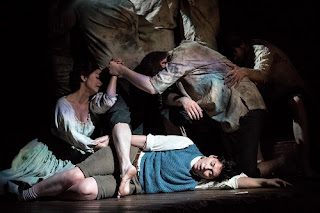 Two very different experiences this week. Yesterday evening's showcased the incredible power of the well-edited documentary footage filmed during the Battle of the Somme, with the most sensitive of scores from Laura Rossi, played simultaneously with the film by the BBC Concert Orchestra under John Gibbons at the Royal Festival Hall (most images courtesy of the Imperial War Museum which organised the event). And, on Tuesday, something I felt I had to see, though Helen Wallace reviewed in for The Arts Desk: the UK premiere staging of Karl Amadeus Hartmann's opera Simplicius Simplicissimus (production photos by Max Lacome; pictured below - the ever-fine William Dazeley and company). 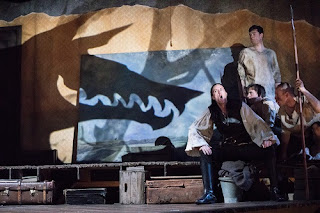 I can see why Independent Opera chose it. The original, Grimmelshausen's picaresque novel, is a tragicomic indictment of the horrors of the Thirty Years War from one who lived through it and undoubtedly put a lot of his experience in to the book (I seem to be the only person among those I met on Tuesday night who's read it, albeit long before I knew the operatic event was imminent; I blogged about it here). Hartmann's opera, which only appeared on stage in 1957, over a decade after he completed his first version, just isn't equal to the subject. Yes, there are good pastiches of the Stravinsky/Hindemith/Weill style, but also tedious didacticism not in the book, woeful word-setting - or so I deduce from David Pountney's tough English translation - and very little original invention. Indeed, the best tune, which appears at the end of the Overture and returns for the summit of Simplicius's climactic monologue, rips off the March from Prokofiev's Op. 12 piano pieces. That's not parody, it's plagiarism.

Musically, this was a strong enough evening. All sang well, especially the male ensemble, and Timothy Redmond ardently shaped the contribution of the Britten Sinfonia. But it was all much too big and loud for the Lilian Baylis Studio at Sadler's Wells. A reduced orchestra would have helped, but substantial operatic voices like that of Adrian Thompson, singing the sympathetic Hermit who educates Simplicius in the forest, only added to the hectoring tone at close quarters. 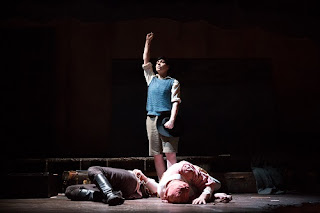 The production, by Polly Graham, was awkward, if not as downright dismal as Gerard Jones's mishandling of Handel's Oreste in another venue unsuitable for the scale, Wilton's Music Hall, which I reviewed for The Arts Desk the previous week. Graham favoured too much heavy symbolism, making movement and motive unclear, and it was a big mistake to dress up Stephanie Corley's admirable Simplicius (pictured above) as a middle-class schoolboy, Sue Perkins-alike when bespectacled, carrying around a notebook. That was supposed to project forward to his keeping a record in maturity; but it accorded ill with the idea that the child grew up in abject poverty, unable to read, write or use proper names.

There were a few good stretches, like the brooding first interlude embracing a Lutheran chorale. But even this was lessened for me by the constant chatter and ostentatious behaviour of the director, sitting two seats away from me. She also rocked the row with laughter at what frankly wasn't funny, to me at any rate. Unprofessional behaviour, only suitable at a final rehearsal, not a performance. 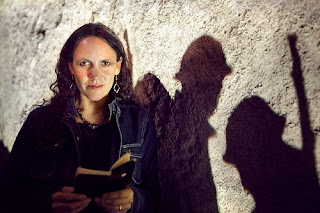 Insensitivity could never be levelled at Laura Rossi (pictured above), the film composer who responded so movingly to the five 'acts' of Somme footage originally screened as wartime propaganda. Apparently cinemagoers scoured the screens for glimpses of loved ones, and I too was on the lookout for my paternal grandfather, Captain George Nice of the Fifth Dragoon Guards, who served in France all the way through the First World War and whose Croix de Guerre-winning action the following April is certainly chronicled. Apparently this assemblage had a score in the first place, but one made of already existing ballads, songs and snatches which, we're told, sounded too triumphalistic a note at times. The only foot Rossi puts wrong, in my opinion, is the swelling apotheosis, which should subside into ambiguity a bit quicker as we see the German prisoners of war - lucky survivors, IMO - bound for England. 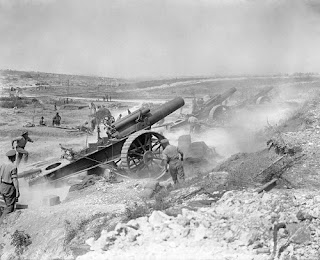 Best of all in the score is the rumbling atmosphere broken by perfectly synchronised timpani thwacks as the big guns go off. I kept thinking of Owen's 'Sonnet On Seeing a Piece of our Heavy Artillery Brought into Action' ('Be slowly lifted up, thou long black arm') in the appalling sequences showing the loading and firing of huge weaponry). 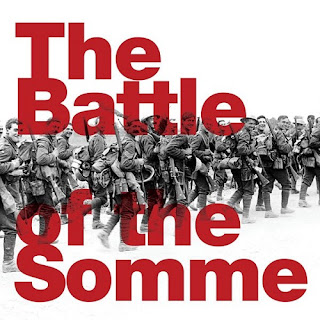 The pity and the horror, which no drama can properly recreate, are there, but also the ordinary humanity of soldiers marching cheerfully towards something they can't imagine, and the decency with which the German prisoners seem to be treated. There's a structure here - the walking 'quite friendly up to Death' and the preparations in the first two parts, the shock of the attacks at the heart of the film, and the bleak aftermath in parts four and five. 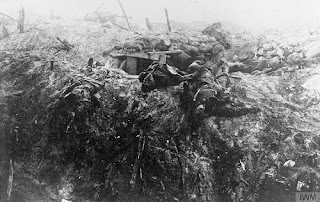 If only there were sound to eavesdrop on conversations. Anyway, this is something every single human being should see, and complement it with the talking heads of First World War survivors reminiscing in old age. Never again, we may say, but Assad's Syrian government and the Russians are at it harder than ever in Aleppo, as a renewed plea from heroic Dr Hamza al Khatib on Change.org yesterday desperately reinforced. Update: today (Sunday) I read that East Aleppo's last hospital has been destroyed.
Posted by David at 13:34

Actors today are too well fed and too educated to play a member of the mass of the people, not only in the 30 years war, but even up to the late 19th century. The lack of education, a term which includes any knowledge of the world, led to the fact that the class system was based on a real difference between the classes, solved only when wealth increased and education became general. Gray's country churchyard contained unlettered Miltons and Cromwells innocent of their country's blood. As for health, it was remarked that when men were called up in large numbers in WW1, they were in many case undernourished, and benefited from good regular food. So I suppose plays covering such things as the 30 years war ( and the slave trade etc) should be seen as commentaries, rather than anything like what actually happenned

But you've heard of method acting? 'Playing a member of the mass of the people' is called acting. And weight can be lost...