One-offs: El Niño and The Nose 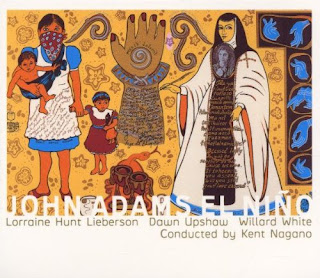 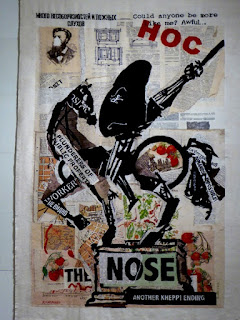 I'm actually referring to one-off classes from the past two weeks of my Opera in Depth course, but Adams' Christmas oratorio/opera and Shostakovich's Gogol extravaganza are both unique even in their composers' outputs (top images: Mujer de Mucha Enagua, PA'TI XICANA, 1999, as it appears on the cover of El Niño's indispensible first recording, and the 2012 tapestry The Nose, with Strawberries, executed by the Stephens Tapestry Studio, Diepsloot, Johannesburg, to a design by William Kentridge - part of the wonderful exhibition Thick Time at the Whitechapel Gallery, which I have yet to write about).

Adams was to go on and enrich the biblical-mythic aspect of his music in an even more complex work, The Gospel According to the Other Mary, while Shostakovich had another shot at Gogol in the 1940s, trying to set his play The Gamblers word for word, but gave up (there are Gogolian touches in Lady Macbeth of Mtsensk, too). Before I pass over what we talked about Shostakovich-wise the week before last - the Adams experience has rather eclipsed it - I must at least put up one more image taken by Bill Cooper of the best thing about Barrie Kosky's Royal Opera production, the multiple dancing noses. 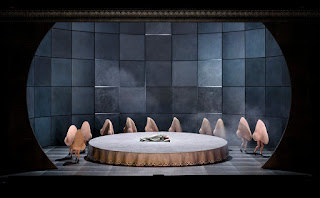 Curiously I felt that the single class on The Nose was actually enough - I'd started by intending three - while I wanted at least another two-hour session on El Niño. All the students who spoke up seemed to fall in love with Adams' piece on the spot.  None had seen the overloaded UK premiere with Sellars overegging an already elaborate pudding with a film that hadn't been timed to fit the music; Adams admits the many shortcomings of that first production when it opened at the Chatelet in his indispensible autobiography Hallelujah Junction, which I wrote about on the blog back here).

I started where Adams does in Chapter 12 of that beautifully written confessional, with what he calls 'the ecstatic shuddering and quivering of violins and jubilantly exclaiming voices' of Handel's 'For unto us a son is born' from Messiah. He goes on to write about the WASPy images of Christ and his disciples from his childhood, his mother's move from the Episcopalian to the Unitarian Church, and how its 'moral and intellectual training', though fine, seemed too close to Plato, Voltaire and Bertrand Russell and didn't feed his need for the 'spiritual truths' of religious mystery and miracles (the latter my own sticking-point with the New Testament). Elsewhere, to Michael Steinberg he confided 'I envy people with strong religious backgrounds. Mine is shaky and unformed. I don't know what I'm saying, and one reason for writing El Niño was to find out.'

It almost goes without saying that, as in so many of Adams' works, the light and the dark are in constant tension. That's best summed up, perhaps, in Mary's response from the St James Gospel when Joseph asks why she is weeping one moment, laughing the next, and she replies: 'It is because I see two peoples with my eyes,  the one weeping and mourning, the other rejoicing and glad'. Only the simplicity of the final children's chorus, a setting of Rosario Castellanos' A Palm Tree, offers any kind of resolution to the two-edged use of the title, 'El Niño' as both 'the child' and that phenomenon of capricious weather - though this too, one feels, is provisional: the naive leading us back towards innocence and away from the sentimental. 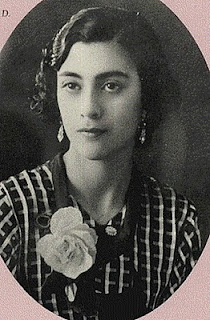 Like Steinberg. I'm indebted to Adams for introducing me to the poetry of Castellanos (1925-74), one of the world's greats, it would seem - and which of us, in the UK at least, knew her work before? On the original recording, it's the incandescent Lorraine Hunt Lieberson who intones the sinuous, Spanish-faithful setting of Castellanos's childbirth chronicle,  'The Annunciation'. The interplay of poems by Castellanos and other Spanish-language writers with Biblical texts and their curious offshoots is as masterly as Britten's interweaving of the Latin mass for the dead with Wilfred Owen in War Requiem, and sometimes more ambivalent. The choruses are shattering, the writing for Dawn Upshaw stunning - more than the pure-voiced Mary of Part One, it's her anguished delivery of 'Memorial for Tlatelolco', the most hard-hitting of the Castellanos poems included, which packs the biggest punch, along with music of breathtaking complexity. This, of course, is the work's 'massacre of the innocents', the flipside of the radiant birth. More on the 1968 horror here. 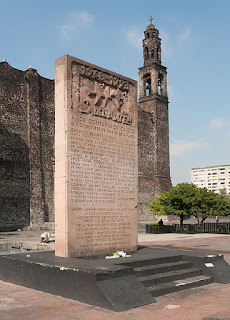 But Adams also has the gift to be simple: I prefaced it with the mixture of St James' and the Latin Infancy Gospel depicting Joseph's amazement at how the whole scene stands still for the birth, sustained strings and pinprick piccolos backing up Willard White's superb natural declamation. And of course we had to end where Adams does, with the finale genius interweaving of the Pseudo-Matthew narrative where the Holy Family is fed and watered by a palm tree obedient to the Christ Child alongside the final Castellanos poem. And naturally the Flight into Egypt becomes the part of the Christmas tale which perhaps has most resonance today given the plight of those millions of refugees fleeing death and destruction.

All this makes us anticipate Adams' own performance with the LSO on Sunday all the more, even though it's only two years since I was blown away by the first performance I heard to present the music in its unadorned glory. Meanwhile, only a couple of hours after I'd finished Monday's class, quite a few of us had moved on to the Barbican for something completely different - the European premiere of Gerald Barry's Alice's Adventures Under Ground. Read all about it on The Arts Desk. The magnificent seven singers are pictured below with Thomas Adès conducting the Britten Sinfonia; image by Mark Allan. 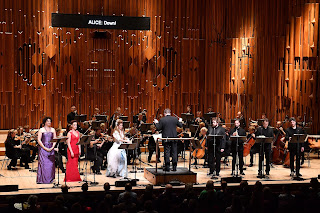 Gerald had promised to follow up his first visit to the class earlier this year with another, but a final rehearsal yesterday afternoon meant that wasn't possible. Never mind, he'll be back soon, not least - I'm certain - for the first UK staging of his new opera.
Posted by David at 17:15

I have yet to hear El Niño live; definitely on my bucket list. Your image of the tapestry brings back wonderful memories of my two excursions to see and hear Kentridge's production of The Nose.

Lucky you; I feel it would have been in a different league from most of the Kosky production. Meant to ask in the Whitechapel whether a DVD was made; I think it was livestreamed from the Met at the time.