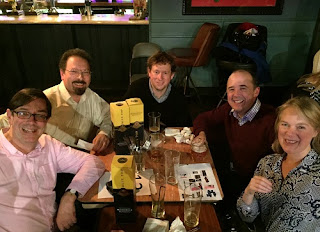 Yessiree, and by quite a margin, let's not be modest. Here we are above with three bottles of champagne to split between us: left to right, myself, Daniel Jaffé, deputy editor of the BBC Music Magazine Jeremy Pound, editor Olly Condy and Helen Wallace. We were pitted against at least a dozen other teams from the world of recordings, agents and magazines 'Downstairs in the Phoenix', Cavendish Square, for the annual Nordoff-Robbins Classical Music Quiz.

The charity it's in aid of does wonderful work in the field of music therapy - read all about it here - so it was all in fun and fundraising and not about the winning. Hell, no, of course it was, since we won...and can we gloat just a moment to say that the Gramophone team came somewhere in the middle (and it's rotten being mediocre, as I knew from a more general, if essentially EU-based quiz at Europe House where we'd drafted in a chap to cover pop, media and sports questions who got NONE of them...these things smart).

It has to be said that quiz-setter James Jolly and I have quite similar tastes, and there were a LOT of opera questions. Got us off to a good start, too, that the 'mystery voice' we heard snippets of across all the rounds happened to be Anne-Sofie von Otter, whom both James and I had interviewed a week or so earlier. But I did recognise the voice before I twigged the connection. I don't suppose anyone else would have done so for at least a couple of rounds since there was little hint of Swedishness in her deep and beautiful tones, and since early references were to cooking and guinea pigs - not connected, I hasten to add. The subject's closer-to-home interests were not cited. 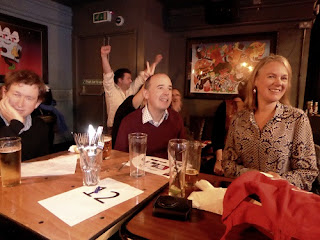 We had to commiserate gamely with our delightful neighbours, Gimell, clearly in a rare moment of getting something right behind Jeremy, Olly and Helen above, since there were hardly any early-music questions, and next to none on the contemporary. My chums, all with editorial experience including regular perusal of images, were good at getting the parts-of-faces pictures and matching couples (at both of which I was next to useless), and I surprised myself by working out the diva anagrams. It was a delicious bonding experience, anyway, though I was surprised at how few other people I knew in the room. And it took all our minds off current non-musical affairs for a couple of hours, which had to be a good thing after the American election. The first time I found myself in a room full of people after that horrible day, we all exploded with pent-up fury. 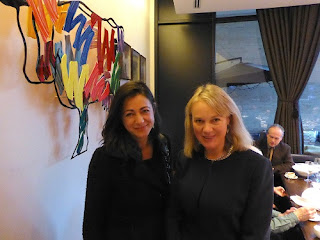 That was at a lunch to augur the forthcoming year of Cello Unwrapped at Kings Place, where I was delighted to meet Nicolas Altstaedt, Ayanna Witter-Johnson and Natalie Clein, among others. Above, Natalie with fellow cellist and now programmer Helen.

Finally, with a tenuous link to competitions, I haven't been following Strictly Come Dancing, though I know that Ed Balls finally left the show last night, having given the UK the biggest laugh and best entertainment this autumn (and this is a man I didn't think had a sense of humour). I can't resist posting as an aide memoire the 'Gangnam Style' sequence as a magnificent token of concentration over aptitude, with the glorious Katya Jones adding high style.

Of course you did. Well done (through clenched teeth).

Don't be shy - which team were you on?

"Hell, no, of course it was, since we won," may be my favorite line. Congrats to all! On the other (unmentionable), here's my current watchword, from HRC: "Anger is not a plan." Hard to stick to, sometimes, but preferable to the alternative. Laughs are good, too, even if noirish.

I must admit we did feel rather cocky-jubilant at our victory.

Pride, of course, is a deadly sin. And so is Anger - though in Weill's The Seven Deadly Sins, it's anger at injustice that must be overcome. And HRC hits the nail on the head in that anger needs to be channelled into a plan. Repressed anger is more dangerous, though, I seem to have learnt from shrinksessions over the years; it can be turned in on oneself and may be a contributing factor in depression.