Two paths to a Greek beach 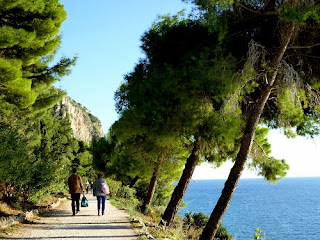 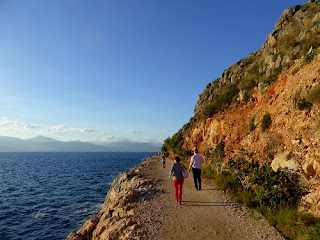 We all need a breather from the 'real world' at the moment, whatever that actually means: retrench so that you can return refreshed to face the most important struggle people of my age and younger have ever known. Otherwise we'll all just crumble and be of no use to anyone. So before I overload on Greek culture ancient and modern, I'm going to start the Nafplio/Spetses travelogue stretch of the blog with two golden afternoons and evenings less than a month ago (hard as that is to believe).

My old university friend Louise lives in Nafplio (Nauplion), where she carries on running the Paralos Gallery, formerly of Athens, selling antique prints, maps and books, which she set up with her beloved husband Panagiotis (he died far too young last year). Nafplio is a place the beauty of which can't have struck me when I came here in 1983 as part of a picaresque adventure and road journey masquerading as an Edinburgh University research project (we in the Greek department each had to write a report on a visit to a place of historical or literary significance - I chose Pylos and Sphacteria, better known long since the days of Thucydides Book 4 as Navarino bay in the south-west of the Peloponnese). Apart from memories of two dogs stuck together in the headlights when we emerged from a restaurant, having argued over an item added to the bill we'd never ordered, the only thing I recall is swimming here and hearing another tourist howling with agony having trodden on a sea-urchin (which I'd done as soon as we drove into Greece and stopped for a dip).

I'd certainly forgotten how the beaches seem a million miles away from the modest bustle of the old town, in what amounts to a national park with the great Venetian fortress (more of that in future) overshadowing the cliff path. 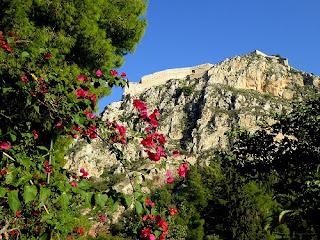 On our first afternoon we walked from that end, past the tempting strand just below the lower fortifications to look back on them 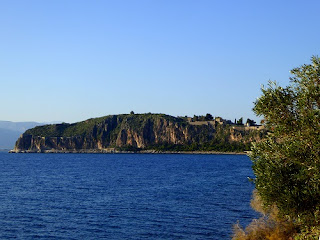 and on past thoughtfully planted bougainvillea 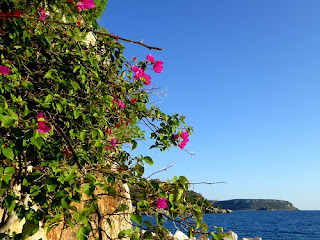 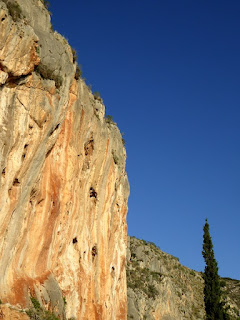 with the only sounds the sea - there weren't even any motorised boats - and surprisingly plentiful birdsong to a modest beach with a few folk on it that day (there was nobody else the following day, when we arrived a bit later). 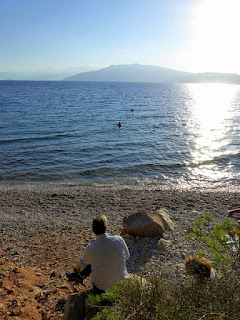 Yes, the water was delicious in early November and amenable to long-term bobbing. This shot is actually from the next swim, as the light would suggest, but no harm in introducing it prematurely. 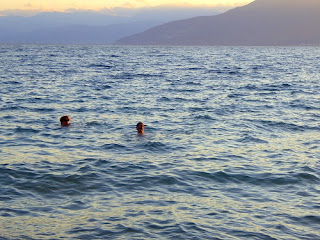 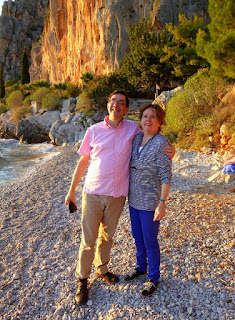 and the other two at the distance J prefers. 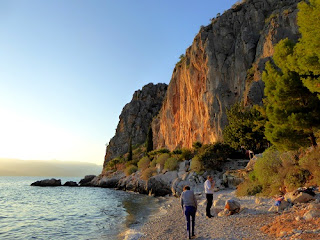 The sun was setting as we began the walk back, now more populated by walkers and joggers from the town, 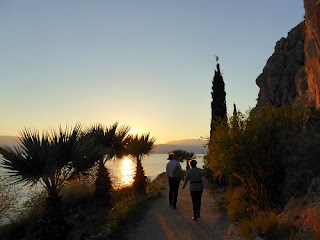 and the rocks took on an orange glow 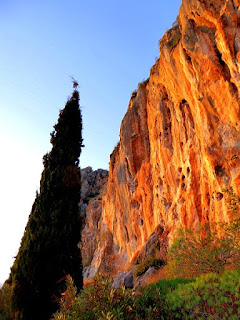 while sound led us to the inhabitants of the holes in them. Anyone identify this little fella? 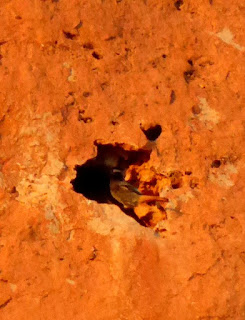 Just before we got back the car park, 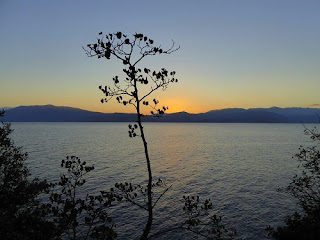 the sunset was good for silhouettes of the plants and shrubs that have either self-seeded or been carefully selected by the municipality to enhance the delight of its citizens. 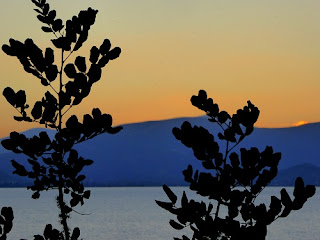 Second full day in Nafplio, and more elaborate examination of the sights plus a late leisurely lunch meant that Louise drove us to the beach at the other end of the walk rather later than we'd set off on the Wednesday. 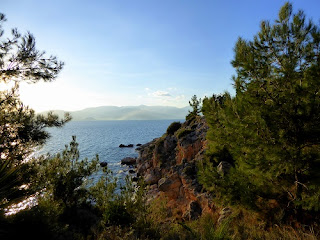 This time we had the beach to ourselves (again, if you can identify this thrift-like plant, I'd be grateful), 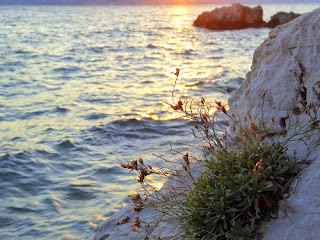 and the bliss of observing the full sunset, including the colour-change of the atomic-looking cloud straight ahead, while resting after the swim. 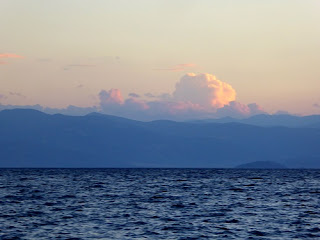 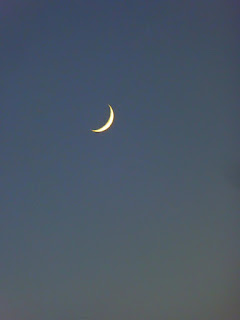 and Venus beneath it, eventually (almost impossible to see at this distance). 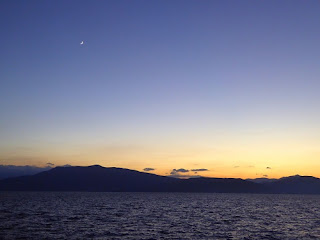 I had the mystical sensation of floating rather than walking back, all the while looking at this. What does Newman's Gerontius say of his post-death experience? 'And gentle pressure tells me I am not/Self-moving, but borne forward on my way'. 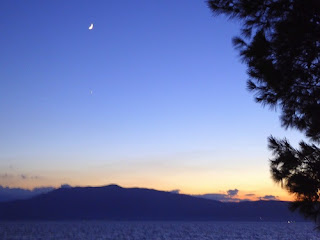 Thus we reached the car on the beach in the last glimmers of light. Life stripped down to its most delicious essentials. Followed, of course, by elaborate meals chez Louise and at a fine fish restaurant on successive evenings.
Posted by David at 16:18

Sigh! I remember a glorious day there on our first trip to Greece and a magical ride back to Athens along the coast rather than the highway. And we won't even mention our driver Dionysius - though he said we could call him Dennis. I preferred the former it seemed more appropriate. Again you are taking me on a wonderful journey - 1000 grazie.

Was he godlike? And did he cover the car with vines?

Yes - Louise does good business online, so I hope that link's useful. So many things in the shop I covet...first Renaissance edition Sophocles, for a start.

Ah, fond memories for me of our own visit to Nafplio some years ago. Our hotel room had a view of that Venetian fortress, and I am sure we walked on the very same path. We were there in the springtime, and the wildflowers were stupendous. Nice to see November yields up treasures, too. Love, in particular your silhouetted photographs of plants.

Yes, I'd like to see more of Greece in the spring (we encountered Kythera then; but I gather Crete can be spectacular with its wildflowers). As the big freeze sets in - though the days are stupendously blue and bright - we remember the bathes with ever more gladness.

David in answer to your question - I remember arriving at the airport and there was a fit young man with golden blond curls and a very god like presence standing there with my name on a sign. I knew right then I was going to love Greece. But sadly he is now more a Dennis than a Dionysus - married, three children and living in New York.