Five times round the Sand-walk 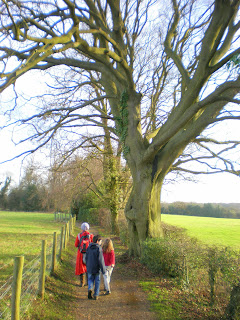 Four of us only managed the one circuit when we visit the Darwins' Down House in the Weald of Kent over a week ago, just before the gardener came to tell us that closing-time approached, but the great man habitually walked around his 'thinking path' five times a day at noon, striking the iron tip of his walking-stick rhythmically on the ground. 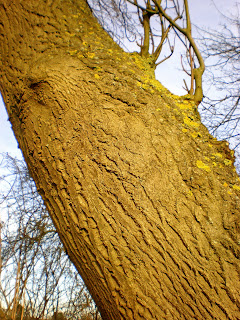 The Sand-walk was very much Darwin's intellectual property, as granddaughter Gwen Raverat wrote in her childhood memoir Period Piece:

It was a path running round a little wood which he had planted himself; and it always seemed to be a very long way from the house. You went right to the furthest end of the kitchen garden 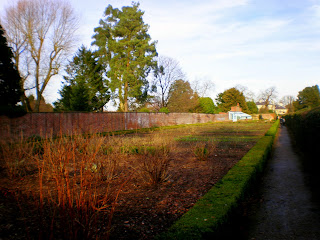 and then through a wooden door in the high hedge, which quite cut you off from human society. Here a fenced path ran along between two great lonely meadows, till you came to the wood. The path ran straight down the outside of the wood - the Light Side - till it came to a summer house at the far end [it's been replaced by a sheltered seat]; it was very lonely there; to this day you cannot see a single building anywhere, only woods and valleys [still true]. 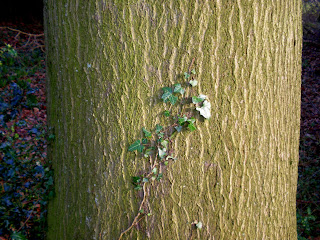 The path then turns to the left and loops along what Raverat as a child called 'the Dark Side, a mossy path, all along the trees, and that was truly terrifying'. She cites a hollow ash and an elephantine beech tree as the biggest horrors of the place. 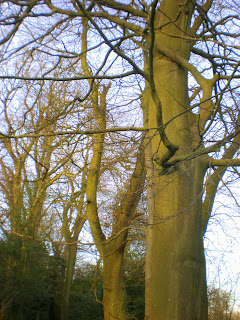 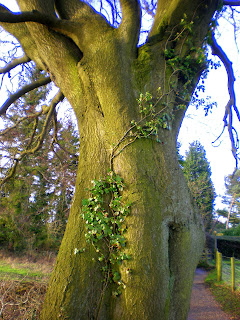 Clearly more of a comfort in the 1890s was the mulberry tree which grew up against thw windows of the nursery: 'the shadows of the leaves used to shift about on the white floor, and you could hear the plop of ripe mulberries as they fell to the ground'. Too early for that in late February, but the gnarly skeleton of the propped-up tree is impressive in itself. 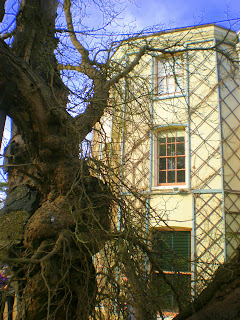 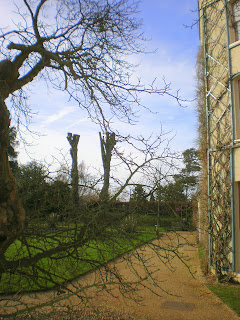 One more arboreal specimen impressed us before we headed back for the suburbia of Orpington - the one at the very centre of Downe village. I was too preoccupied with sorting out a timetable crisis - the youngest member of our party didn't have the energy to walk back another three and a half miles the way we come - to check out what it was, but clearly it's a beauty, even if the shoots have that peculiarly living quality Darwin notes in his insectivorous plants. 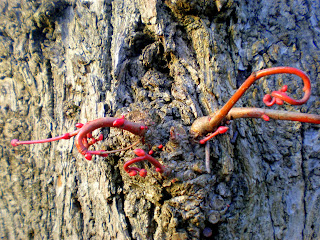 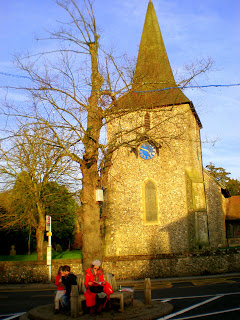 The bus situation may have been in a state of confusion, but the last kindness of the day was the driver ushering me on when my Oyster card - yes, we were still on the London fringes - had run out of juice. It was curious to see, and be seen by, the suburban world in the disguise of a respectable putative father, to find out how much nicer most people are to you - in this country, at any rate - if they think you're a family man with wife and kids in tow than if you happen to be two men, obviously a couple, together. Sad but true, though I don't think it pertains in the metropolis proper. 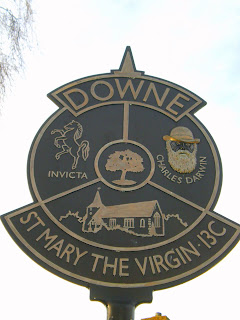 An elderly mother in tow can be nearly as effective as a child, in producing a softer welcome. It is evolution, dear boy, evolution. There is nothing to be done about it.

One of the tremendous strengths of the Origin of Species is the beautiful prose and logic. This stemmed one can presume from the fact that Darwin wrote his first and longer version something like 15 years before the final version was published - so that one can speculate that he pondered and refined his arguments and his wording on his long (for me at any rate: I would have taken the bus like the young visitor) walks - especially as he called them his thinking paths

Another example - if I do not leap too far in proposing a parallel - is Wodehouse, who wrote Joy in the Morning - the book many aficianados would place first amongst his works - at the beginning of the Second World War, but could not publish it until the end. He had plenty of time to polish the prose.

Indeed, David, he was a great polisher and refiner. But he seems to have written beautifully even the most - seemingly, at any rate - casual letters to friends and family. And the more I read of his words, the more I think he must have been a very fine human being as well as a great thinker.

I agree about Darwin's character. One aspect is as follows: the reasons for the long delay in his publishing his theories are not definite, but one which is proposed is that he did not want to horrify his wife, a believer, a reason which shows a very great kindness.

Of course we can now construct a case - as does the Church of Rome, and explicitly - that the Big Bang and evolution are perfectly compatible with Genesis and the Christian revelation. But though that might be true in logic the overthrow by Darwin of the apparent structure of the world as clearly set out in the Bible was a tremendous shock, which Darwin might not have wished to inflict on his wife.

For those not in possession of the Origin of Species I would recommend the text edited by Joseph Carroll ISBN 1551113376 which apart from the basic work contains many other relevant texts and extracts including comments by Huxley ( " Why didn't I think of this myself?")

Yes, and as he showed, scientific understanding is not exclusive of a sense of wonder and a metaphysical point of view. I was surprised to see him declare so explicitly that he was agnostic (a term apparently invented in the mid-19th century) and not atheistic.

And he loved his Wordsworth, which is bringing me back to a poet we pooh-poohed at school.

I think it was the same Huxley who claimed to and probably did coin the word "agnostic" in 1869. And it was maybe the later nineteenth century which gave rise to the idea that scientific equals ruthlessly rational, omitting the metaphysical. It took the twentieth century with Einstein ( yes I know etc etc) Heisenberg, Godel etc to show that there are more things in heaven and earth than are dreamt of in deductive science.

As regards Wordsworth - he had two voices, one of the deep and the other of an old half witted sheep ( J K Stephen, Granta 1891.) One can only agree

Alas, yes. Poems like Simon Lee are beyond parody - they already do it to themselves.