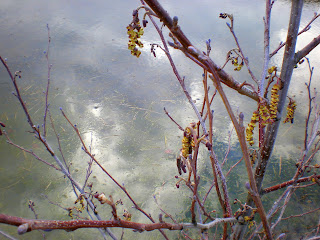 Oh to be in Borders country when the clocks spring forward. I was, for one night only, and a more Fotherington-Thomasesque mood could not have been inculcated by the purling stream beneath my bedroom window, the scudding clouds across blue skies which lasted at least until mid-afternoon, and all nature truly waking up, albeit a good few weeks later than down south. 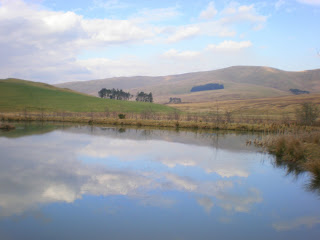 After lunch, the father of the house - a good woodsman and Broughton-by-Biggar's most generous possible trustee of its hillsides - suggested we go and look at the frogs in his half-pond, half-lake just outside the village. He's delighted that the alders on the fringe, pictured up top alongside spawn in the water, have self-seeded from those in the plantations furter up the slope. As for the amphibians, we could hear them from a distance, and what we saw close-up was not always pleasurable to behold, but that's nature for you. 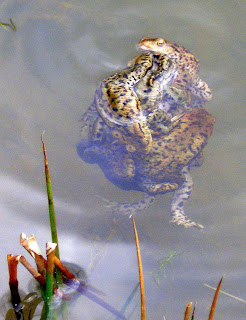 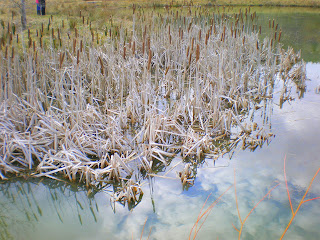 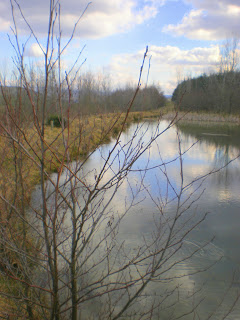 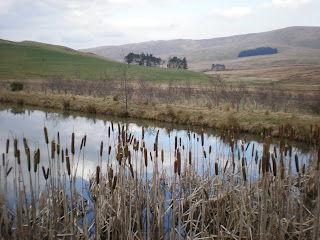 Finally for a glimpse of stream and wood life, too. Our snowdrops down here are long since gone; at Chapelgill they're still hanging on 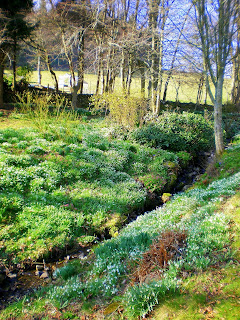 and stink cabbage is just shooting up in their midst. 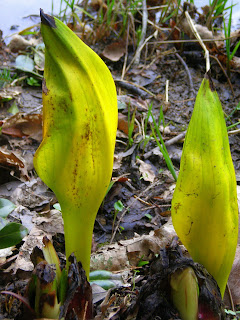 Following my new-found fondness for outlines of trees before they fully leaf, the beeches along the edge of the wood proved photogenic candidates. 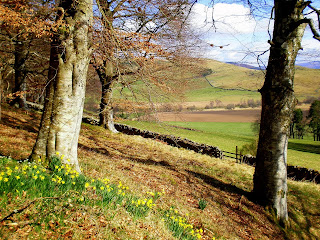 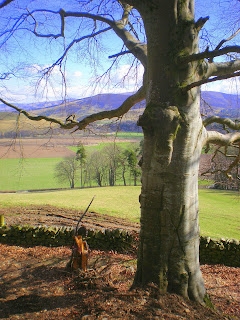 And then through one of the loveliest drives in the UK to the drear of Lanark, and the train journey to Glasgow for a slice of operatic bourgeois life. I think all the more fondly of the packed weekend culturally speaking since it's been flanked by such dross in London, an unusual turn of events: Peter Brook's stultifying A Magic Flute last week, and a mediocre if by no means badly sung Fidelio yesterday. Looking forward now to a longer natural break from the civic whirl.

2.30pm: re the Arts Council cuts/grants, I just don't get it: why punish some and over-award others? Latest summary here. It reads like a mess to me, and of course it was obvious that some would lose out. One good piece of news: funding for Tete a Tete Opera means we should get the production of Martinu's The Three Wishes they've been hoping to do.
Posted by David at 10:14

"all nature truly waking up" How lovely to think on it and read your report. Here it remains cold and brown and a big snow is predicted here tomorrow. Yet, the robins are congregating in our front yard--I counted 48 the other day--and when the sun peeps out, the still-bare trees do make lovely shadows. Just the same, I look forward to nature waking up and am pleased to have a preview.

As for the arts council cuts/grants, these things do always seem so arbitrary and disheartening. This side of the pond, Alex Ross reports, "Here in America, meanwhile, arts funding has been cut from nada to zilch." The Syracuse Symphony is a recent casualty.

Sue, it's now 2017 and you've just reminded me about this post. Probably one of the very few times I didn't have the courtesy to reply to a comment you made. Anyway, here we are six years on, and good friends now, in the flesh as well as virtually...