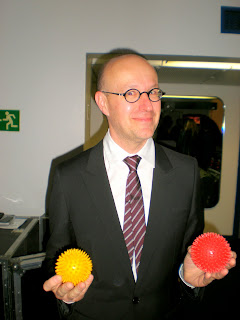 This is one of the most engaging composers of my generation - heck, he's even a bit younger than I am: Innsbruck-born and mountain-based Thomas Larcher, whose overwhelmingly dramatic Violin Concerto had its first UK performance at the Barbican on Friday with the glorious violinist who gave the Vienna premiere, Isabelle Faust, and the phenomenally gifted Kazuki Yamada, also turning up in London for the first time with the BBC Symphony Orchestra, who seem to adore him.

I went over the top trying to give my impressions of the concerto on the Arts Desk, so I won't expand here except to explain that the massage balls are rolled around the piano strings towards the eerie end of the piece (apparently you can hear the effect a lot better in one of Larcher's chamber works, which I can't wait to discover, and maybe on the iPlayer broadcast of the concert - you have five days left to listen; don't miss any of it).

I met Thomas for ten impression-packed minutes of my pre-performance talk, having earlier been misinformed that he wouldn't be appearing as his English wouldn't be up to it. Regardless of the fact that it was bound to be better than my German, nothing could have been further from the truth: he speaks clearly, directly and idiomatically, a composer completely sure of his aims and effects, though never in a big-headed way (he's also a very fine pianist, student of my goddess Elisabeth Leonskaja in Vienna).

We talked about the expanding and contracting effects of time in the piece, its two riveting dramas - I'd just heard it for the first time in rehearsal - and the inevitable impact of the mountain scenery onto which Larcher looks most days from what the programme biography told us is an 'architectural prize-winner' of a modernist home. That left me a mere quarter of an hour to go through some of the more remarkable features of the Rachmaninov Second Symphony, but the stepwise, orthodox chant-based element did seem to strike some of the audience as novel (those, that is, who didn't get up and clear off after the little composer interview, bit rude, I thought, especially as they couldn't have told then if I was going to be boring or not).

The BBC Symphony Orchestra have been on a real roll, starting the year with John Wilson in Hollywood classics and reaching a zenith of hard work - sectional rehearsals and all - for the Ferneyhough day which was so enthusiastically received by my idiosyncratic colleague Igor on The Arts Desk (I couldn't pass the chance to see Turnage's Anna Nicole that evening). In fact as I was ennumerating the orchestra's various triumphs with the Elgin Trio from the orchestra, who came to play for my lucky class on Tuesday, their viola-player, Kate Read, said how good it was to actually think it over and realise, yes, it's been good - they're so busy not just with the concerts but also with studio recordings (including, that very day, Delibes' gorgeous Sylvia ballet music with Yamada) that they rarely have time to take stock. Here, anyway, are the Elginers in the far from dreary City Lit board room where we meet - Kate centre with violinist Anna Smith and cellist Michael Atkinson. 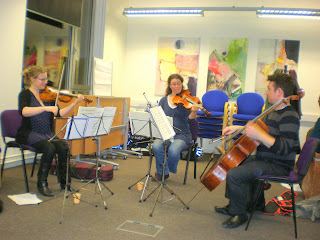 They played through elements of the programme they're giving on the last Saturday of the month - I need to check details - an early, mostly Mozartian Schubert trio movement; the first and last movements of Martinu's first, mostly fierce and not easily identifiable-as-him string trio from his Paris years; and ineffably beautiful arrangements of Bach's three-part inventions; if anything, the F minor No. 9 sounds even more expressive on strings than it does on the keyboard. As I said, I'd be happy to have that at my funeral - not that I'm planning on going anywhere, and in any case the list changes from month to month... Told viola-playing Ruthie in Edinburgh about these, since her quartet is temporarily a trio, and they took them up immediately with delight, already having the trio-version of the Goldberg Variations in their repertoire. Dmitri Sitkovetsky's recording of his now celebrated version, 'in memoriam Glenn Gould', with Gerard Causse and Misha Maisky, is one of the CDs I take off the shelves most regularly. 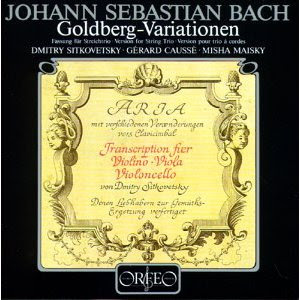