Not faded and gone 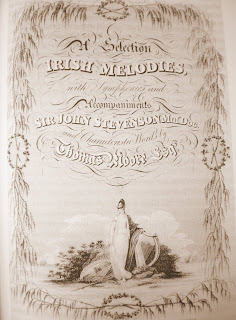 The elegy lingers on. I guess it was because Tom Moore proved so loveable and candid in company that his verses, so perfectly wedded to the Irish melodies which gave them life, still spring off the printed page. It helps to have a good context for them. That we certainly got from the lecture-recital in which Moore's biographer, Linda Kelly, gave us a taste of his life, with performers as classy as mezzo Elena Marangou, a certain diplo-mate tenor here only ever consenting to appear as J and pianist Oliver Williams infusing a savour of settings by Stevenson, Britten, Duparc (in French) and Schumann (in German). Oh, and nearly last in the programme but by no means least, a little cycle of four songs specially written for Elena (and Linda) by Greek baritone/composer Tassis Christoyannis (splendid comic Ford in Richard Jones's Glyndebourne production of Verdi's Falstaff). 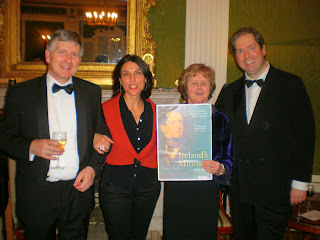 Before two very different audiences, they captured, I think, something of the joy and sorrow commingled in these pieces, in which the sadness of 'The Last Rose of Summer' - the supreme achievement, surely, of Britten's selection, with the ominous questions of the arpeggiating left hand only answered in the very last bar - usually gains the upper hand. Indeed, that song seems unusually prophetic, since Moore was to lose all five of his children, his two sons of sickness serving in the wars overseas. But up until those devastating final years, he seems to have been a a truly jolly fellow - best buddy Byron wrote of their time in Venice that they 'did nothing but laugh' - and his strong moral reactions to most of the injustices of his age, as an Irish-Catholic 'slave' constantly refused his rights by England, make bracing reading. Linda has brought out all the right details, I'm guessing, in what I've so far read of her very affectionate little study. 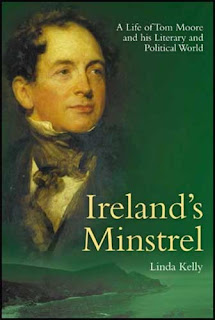 Moore knew what he had to do with the original Irish airs, first preserved by Belfast organist Edward Bunting. He wrote to Stevenson in 1807:

The task which you propose to me of adapting words to these airs is by no means simple. The poet, who would follow the various sentiments which they express, must feel and understand that rapid fluctuation of spirits, that unaccountable mixture of gloom and levity, which composes the character of my countrymen, and has deeply tinged their music...

And so he did. There's so much to choose from, and so many versions to choose it in (Moore originally used to sing, and often to play, his own settings). Elena gave us the sheer charm of Schumann's Zwei Venetianische Lieder and Duparc's Elegie, as well as Christoyannis's very voice-friendly approach to four of the poet's earlier translations from the Greek (he was known as 'Anacreon Moore' before he became the Bard of Erin). J stuck to a mixture of Stevenson and Britten. 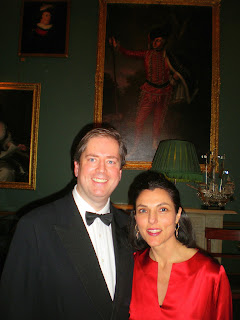 Investigating further, and listening with pleasure to my two CDs of Berlioz Melodies, I hope they'll both respectively be singing that master's typically idiosyncratic settings of 'La belle voyageuse' and 'Adieu, Bessy' (Bessy was Moore's wife of 41 years). I also listened to early McCormack - such freshness, allied with superb bel canto technique - and found a few telling snippets on YouTube. 'The Last Rose' came to opera singers, I guess, through Flotow's Martha, hence Sutherland's championship

and it's quite a surprise to realise that sweet Deanna Durbin was every inch the feeling artist, too.

and of course John McCormack in 'The Minstrel Boy', a tough and emotional sing as J will tell you.

Anyway, I'm glad Linda has encouraged a mining of this especially rich seam. The little show, adapted and lengthened or shortened, could run and run.
Posted by David at 19:10

Among many other interesting bits in this post, it was fun to listen to the "Last Roses" side-by-side. While I've known the song forever, I'd never known who wrote it! (More evidence that my musical knowledge is mostly made of gaps.)

Kind of you, RA, not to point out that some of it must have made no sense whatever when you read it: just back at the end of an exhausting week, which has included helping my ma to celebrate her 80th birthday in style, and the brain was addled. Still not certain it's much more lucid, but it was time I tried to write something about the Moore events...

Anyway, I'm not sure if that many supposedly musical folk know exactly Moore's role in 'The Last Rose' vis a vis the way the music and the words work together. The situation is confused by the fact that sometimes TM also wrote the music.

"The Last Rose of Summer" has been a long-time favourite also in Japan. The song was first introduced as early as 1884 in a music textbook for primary schools. In those days rose flowers were rather unfamiliar for Japanese, so the name of the flower in the lyrics had to be changed to 'chrysanthemum.'

Fascinating, Shin-ichi: only made possible by the fact that the Japanese for 'chrysanthemum' is less of a golden mouthful than ours...

Yes, David, you are right.

Who IS that handsome Irish-looking gentleman, anyway? Is he yours and won't he let you say?

"All her lovely companions are faded and gone..."
Beautiful, and especially moving to me right now.
Thanks for sharing this. I'd love to hear other interpretations of his music! Perhaps now contemporary singers will revisit it.

My one encounter live with "The Last Rose" was as part of a rare performance of Martha starring Victoria de los Angeles.

It was not a happy occasion for her, her last Metropolitan Opera engagement and a poor substitute for Louise that she had really wanted. But she was a trouper and sang it very beautifully indeed, with that pure glowing sound for which she was so well known.

Thinking of your plight and so many others, Elizabeth, I find the last four lines of that extraordinary poem even more remarkable, bearing in mind that Moore didn't live long after the last of his five children had died. Despite Bessy as his one remaining comfort, he declared he was sinking into a vegetable existence, and after some kind of stroke spent the last three years in a helpless state, barely recognising anyone. And so, at the end of a poem which if you read it carefully is about putting the poor old last rose out of its misery:

When true hearts lie wither'd,
And fond ones are flown,
Oh! Who would inhabit
This bleak world alone!

The Emperor of Japan sits on the Chrysanthemum Throne...... (I seem to remember a large gold crysanthemum motive on the front of each of the Rolls Royces in the Imperial Service) So the transition to chrysanthemum in the Japanese version of The Last Rose of Summer has an additional poignancy

I belong to the RA gap club and have found this post particularly personal and touching as this was song (Joan of course, the big lush orchestral version and the big lushy voice) I chose to begin my mother's funeral service, just one year ago to this day. She was a Doyle from a Kevin from Maynooth, and yes she was called Bessie, the youngest of six. At 102 she was indeed the last. Treasure your mother's birthdays David, not that you need to be told.

Thanks for that very extraordinary perspective, wanderer, and yes, only five minutes ago as I locked up my bike I was thinking, crumbs, my ma really is 80 - some physical frailty, but the memory is excellent and the will to enjoy as strong (and tiring!) as ever. 102, though - that's some way to go (not 'way to go', that bizarre Americanism I just don't get).

Anyway your advice has at last been taken; we had a Sunday to treasure, and I learnt things about my parents before I was born from their godchildren and niece I certainly didn't know before.