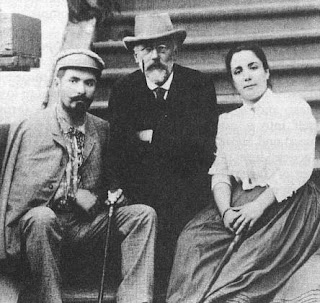 That's the by all accounts outstandingly musical but - on the recorded evidence - not exactly rock-solid tenor Nikolay and his Florence-born wife, Medea Mei-Figner. There they are flanking Tchaikovsky, for whose Queen of Spades they created the roles of Hermann and Lisa (they were also the first Vaudemont and Iolanta).

Why my interest all of a sudden? Because having embarked on Rimsky-Korsakov's vocally rewarding Tsarskaya Nevesta (The Tsar's Bride) with the City Lit students, we were all smitten with the invention as well as the performance of the Act 1 Lyubasha/Gryaznoy duet as sung by Borodina and Hvorostovsky. Of course the descending scales must be indebted to Tchaikovsky's example, but it reminded me of something else, which eventually came to me - Amneris and Radames in Act Three of Verdi's Aida. Checked performances in Russia, and found that not only was Aida first performed at the Mariinsky in the mid-1870s - dates conflict - but that the Figners sang in it together on one of the many revivals. 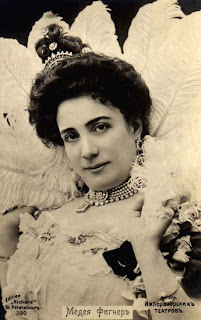 I'm assuming that the plumptious Medea sang Aida, though since she was trained as a mezzo, it could have been Amneris. On recordings kindly copied for me by the indefatigable Roger Neill, she emerges - in Lisa's midnight aria - with greater honours than her husband, who gets rather amusingly shouty at the end of a number from The Oprichnik. But we're lucky to have these recordings, from 1901, at all. And thanks to Roger, and his friend Roger Beardsley, for another splendid disc I'm listening to at the moment, of great folk and classically-trained singers, from Plevitskaya and Kruszelnicka to Chaliapin and Smirnov in traditional numbers. And here, as I write, is Chaliapin in 'Stenka Razin' - I had no idea that was the original of 'The carnival is over'. 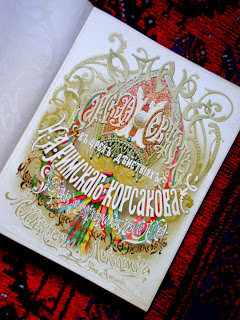 Anyway, The Tsar's Bride (can't resist reproducing again the gorgeous cover of my vocal score) has so much good music tied up in an impossibly melodramatic, why-should-we-care plot. Much like Aida, in fact. And there last night at Covent Garden, in the revival of one of David McVicar's less interesting efforts, was Borodina producing her usual incredible vocal lustre but barely moving. Ditto Alagna - see the Arts Desk review. Here's our stately Amneris, anyway, in the first of two production images for the Royal Opera by Bill Cooper. 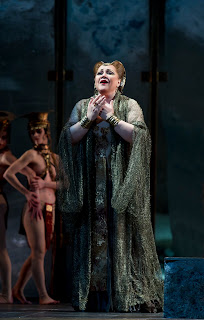 You could hardly, on the other hand, blame Liudmyla Monastyrska for doing the bare minimum; she was a last minute replacement for the Aida of Micaela Carosi, who pulled out pleading pregnancy(?). Monastyrska's is a major voice - I haven't had such a thrill from a laser-soprano in an ensemble since Dame Gwyneth, and she can do all the soft stuff too with what seems like a rock-solid technique. That augurs well, as I wrote, not just for her Lady Macbeth, due later this season, but also for a potential Brunnhilde. And when did that last happen? Here she is with Alagna in a visually unatmospheric but musically transporting tomb scene. 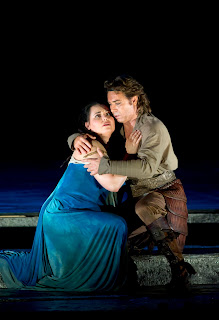 I love that vocal score cover! Had to write also to let you know you are keeping me VERY busy (in a wonderful way): I have the King Lear coming soon and have just re-upped for the BBC Music Magazine (I used to get it and loved it--I remember particularly the "Building the Library" segments, so it will be fun to see what you recommend, as well as review). Thanks for offering yet another wonderful insight over at RA. Smart fellow, that Prokofiev, eh?

And it's mine, all mine - I rather carpet-bagged old scores like that for next to nothing in Moscow and 'Peter' in the early 1990s. Since then, they've got more savvy...originally illustrated it alongside the wonderful original cover of Queen of Spades.

Yes, my main man knew his onions, and boy, could he write. At the risk of costing you too much, I can't recommend too strongly the two volumes of diaries so far translated - and brilliantly annotated - by Anthony Phillips. This is the best account of that period in Russia by any eye-witness, I think. As Prokofiev always said, if he hadn't been a composer, he would have been a writer (professional chess player a close third).