In search of early Alpines 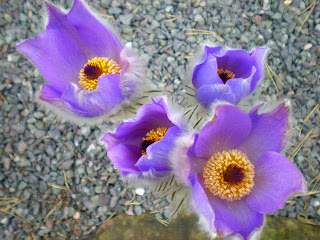 What would I like to be in another life (not that I can really imagine being anyone else, but it's fun to fantasise occasionally)? At the moment, in the wake of my Darwin phase - which partly turns out to be something of a father-fixation - either a geologist or a botanist. Reading about the great man has brought about a realisation that classification doesn't diminish a sense of wonder about the natural world. And though my knowledge about plants has focused on a mere handful of species, I'm getting to know what I like. So, after our many Apennine walking holidays, and above all last year's excursions to the Julian Alps and the Valais, Alpine plants are my current craze.

Dipping into Jim Jermyn's Alpine Plants of Europe - helpful because it covers the zones from the Pyrenees to the Carpathians and tells you what's unique to each - coincided with an article on the Pulsatilla family in the Kew magazine. That's pasque flowers to the average punter, and being fascinated by their hairy leaves and their early appearance - though the flowering is staggered according to subspecies from the eastertime suggested by the nickame through to early summer - off I went along the river on my bike to the Royal Botanic Gardens. In fact the bloomers in the rock garden were few but splendid, chiefly Pulsatilla halleri subsp. slavica, a Carpathian spring visitor pictured above in one small but noteworthy group and below in a bigger cluster. 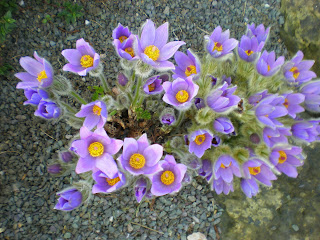 I think I snapped the Pulsatilla vernalis - or alba or alpina or even Anemone baldensis, to which the pulsatillas have always been related, and how's an amateur to tell the difference? - on that extraordinarily rich floral trail around the Lago del Predil in the Julian alps (see last year's entries on the place and about the flowers). Here's the putative Pulsatilla 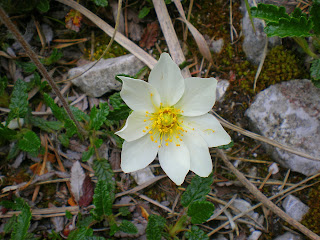 and a reminder of the location, just over the border from Slovenia - which we walked in to, very exciting - with the monstrous dolomitic Cinque Punte in the distance. 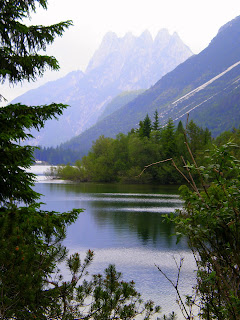 One of the most heavenly places on earth, and the south end of the lake has no road, only tracks, hence the abundance of plants.

Anyway, the rock garden at Kew is very bald at the moment, which makes its few flourishings all the more impressive. Here are a crop of Balkan tulips 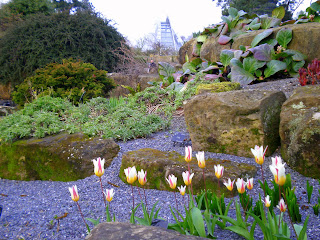 and can this really be a type of Galanthus, as the label by it indicated? I know they come in more shapes and sizes than just the plain white snowdrop. 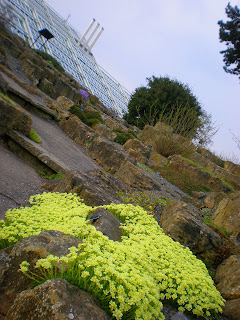 Inside the Alpine House, there were a few bright treasures, mostly in pots: the Chilean Tecophilaea cyanocrocus 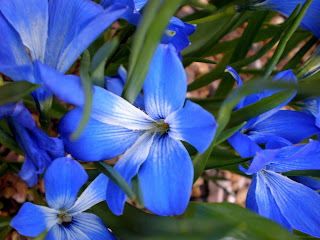 and the Scoliopus bigelovii or Californian fetid adderstongue (no bad smell detected here), a damp-loving member of the lily family which nestles under redwoods. 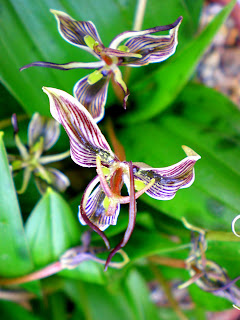 Spring is still only half-formed at Kew now, though I get more excited at the early buds and shoots than I once did. The healthily lichened magnolias are all furry and incipient 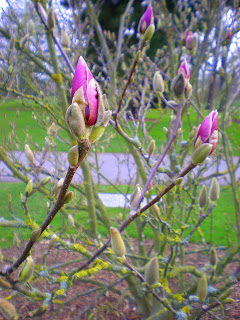 and there are some spectacular blossoms, not least a rare type of prunus by the lake. 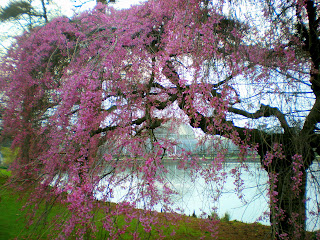 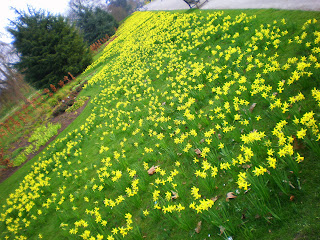 and the trees are mostly budding but not yet in leaf; again, I find much more poetry in the bare outlines than I used to. Perhaps I'll return to them for comparison in a month or so's time. Anyhow, I left well satisfied with a couple of Pulsatilla purchases, white and red, along with a Primula denticulata, though I'd actually been on the lookout for Sempervivens. Here's a final reminder of one such kissed by the bee high above Verbier 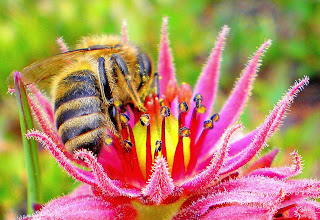 part of a precipitous clump, which I can't resist including with a look forward to the months when the snow clears and we can go a-wandering again in the heights. 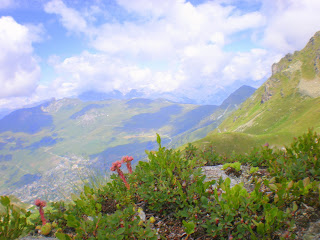 What breathtaking photographs--and I particularly love the way you segue from the Julian Alps to Kew Gardens, reminding us that, when we can't get elsewhere, we can find beauty close to home. Hard (well, for me, nigh impossible, actually) to keep up with you, but I'm very glad to have the opportunity to try!

Well, living as you do in the mid-Hudson valley, you have some beauty all around you, as I know from my visits to Bard. Only in Russia have I seen such a river!

And the warm appreciation is so welcome - couple of friends in London said all that colour made their day, so that makes it worthwhile.

from MrEdward Watmough
I love the Savill gardens, Windsor, and also Capability Brown's astonishing work in the gardens of StJohn's College Oxford, for the imagination and inventiveness to be seen in both.
By the way, as a professional critic, how do you listen to music? I have not been much impressed with compressed sound like mp3, but last weekend I listened to Ivan Fischer/Budap FestOrchesra's Dvorak symphonies on SACD Surround Sound, using a collection of MonitorAudio speakers(six or seven, I think). The effect was much more powerful and imposing than simple two-channel stereo.
Edward Watmough, Guildford

Savill Gardens marvellous for meconopsis, that amazing Himalayan blue poppy, I seem to remember, Edward. And thanks for the hint about St John's College garden, which I didn't know about.

I still listen in plain old stereo on a trusty pair of B&W loudspeakers, Rotel amplifier (more details available if you think it of interest). Have listened to some SACD discs on friends' equipment, not so impressed that I felt I had to invest myself. And it doesn't seem to be catching on with all CD producers as they hoped it might.

Have just been compelled to invest in a Blu-Ray DVD player, very reluctant to do so as I can't imagine the picture being that much sharper than the excellent one I already get on a quite old Panasonic TV, but review needs must, so we'll see.

Edward Watmough
re your comments about the West Wing, have you tried the Wire and the Sopranos(best watched on a screen or white wall via a DVD player and stereo cabs on each side of the picture). The script on both Sopranos and Wire is excellent; good enough for two or three viewings of the complete series to catch all the quips and mafia gallows humour. I am currently watching HOUSE which is pretty good and very heartwarming and touching in parts; Hugh Laurie has certainly come a long way since a very poor Jeeves&Wooster with Stephen Fry
Edward Watmough.
ps DVD projectors are quite cheap to buy - the expensive thing is the bulb inside, which only lasts about 1000hours, but it's worth it for the effect, compared with a TV screen.

Those yellow flowers:Definitely not snowdrops, not bulbs. Hard to see but I think they are prbably a saxifrage - aiziodes, apiculata, Lohnmuelleri (not sure spelling of last) or variety of above.
Lovely pics though. Magnolia far in advance of ours here in Wiltshire.

No, Deborah, and my mistake in plant-perusing to think there were galanthi that didn't look like snowdrops. I'll be back there soon so I'll check.

Edward: The Wire was watched in its entirety here, but not by me - I could see its astonishing virtues and filmic grace but never drew close. The Sopranos has been on the list for years but will now have to wait while we catch up with at least six more series of The West Wing. Which is commonly rated by so many friends I've spoken to as the best American series ever.

look out the Fellow's Garden at Clare, Cambridge, for strikingly beautiful arboritae - difficult to access, but a letter to the college secretary in advance should do it. Please note that SACD and surround sound are actually two different technologies, though Fischer/BudapestFest Orchestra CDs have both, as well as DSD.
Another excellent TV series which I watched on DVD is Ken Burns' Civil war of America - which like you with West Wing I bought in a charity shop
Edward Watmough