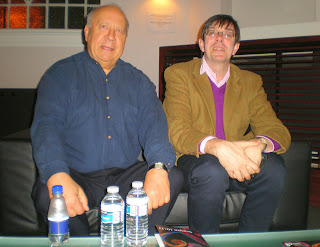 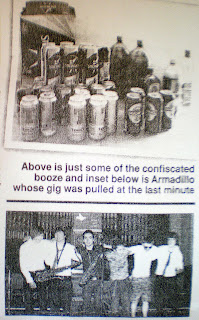 The master is, of course, that greatest of conductors Neeme Järvi, something of a hero for me since he set the sleepy Edinburgh concert scene ablaze when I was an impressionable student; the delinquent is not I, in what's an especially nerdy looking photo, nor even, in truth, the real subject, my just-18-year-old godson Alexander. You'll understand what I'm talking about when you read the full story further down.

All this was only part of an eventful weekend whizz between Edinburgh, Glasgow and Broughton-by-Biggar. The lynchpin was a new Scottish Opera production of a Strauss opera I hold curiously dear - Intermezzo, the barely fictionalised tale of a marital storm-in-a-teacup between the composer and his wife. It turned out to be a discreet, human and gaudily but not inappropriately Klimt-framed show, classily sung and conducted. The Arts Desk, where the review went up yesterday, wondered if I couldn't find something else to cover while I was there. And what serendipity: the finest conductor the Royal Scottish National Orchestra has known before Stéphane Denève, who's doing such great things there now, was back in Edinburgh's Usher Hall on Friday for his only programme with the orchestra this season.

It was mainly taken up with 'the Leningrad', one of the four Shostakovich symphonies out of the fifteen I don't have any sort of soft spot for. Still, it's got all the usual traits, fireworks and between-the-lines nastiness, and I knew Järvi - whose performance of it back in the 1980s was one of the few I didn't catch live with the then SNO - would do wonderful things with it. He did, above all in a last five minutes I'll never forget - and just when I'd given up all hope of Shostakovich's less than convincing finale; again, read all about it on The Arts Desk. And you can hear the Radio 3 broadcast of the whole, splendid concert for the next week on the BBC iPlayer (with thanks to Petroc Trelawny for plugging the Arts Desk review at the end).

Neeme and I were supposed to meet at 5.30, but Radio 3's presence meant that the interview got shifted to 7pm. Yes, with a concert starting half an hour later. That's often been Neeme's style - he'll talk up to a concert, unlike Gergiev who will go on and keep the audience waiting if he's got more to say - and as usual the ideas and the enthusiasm were just pouring forth. I must say that when I last saw him in London, the performances - of Taneyev and Kalinnikov symphonies - were masterful, but he looked a little tired and unhealthy. Not so on Friday. Dear Edinburgh-based friend Ruthie, to my surprise, said she'd be happy to come in with me rather than hang around for half an hour; Neeme was predictably easy about that; and R can confirm that the first thing he said was how much he'd been enjoying my blog - 'I keep going back and back, more and more' - and what a good thing it was to express what you feel about all sorts of things in life. Here I am - again, a spur-of-the-moment thought that since Ruth was there, she might as well snap us - apparently telling him that the next entry would be extremely short. Not. 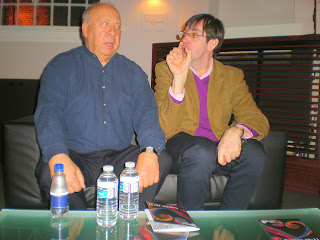 The interview will eventually appear as one of TAD's Q&As, so enough of that. But I ought to try to get to Tallinn in September when the male members of the clan - Neeme flanked by sons Paavo and Kristjan - will each be conducting a different orchestra on three consecutive nights.

So what about Armadillo? Well, I haven't heard it yet but I can imagine its fusion of jazz, rock and funk must be rather accomplished; clever Alexander has just got a distinction in Grade 8 clarinet, which is about as good as it gets. The full story of the Peeblesshire debacle, which made the front page of the local rag, is a bit sad and sorry, certainly not up there with the lead story of the weekend, the London protests against the cuts which of course I was nowhere near. The gig was planned to celebrate A's 18th birthday. First it was scheduled for Stobo Village Hall, then moved to Peebles Burgh Hall owing to police and council intervention, and finally cancelled at the last minute on health and safety grounds. 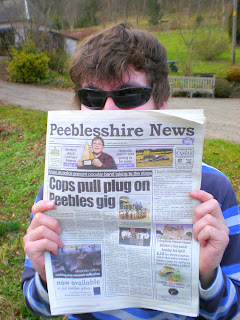 A has no need to disguise his identity with the dark specs (my idea as he doesn't like being photographed and surely wouldn't want his full visage seen here). His band honourably asked for a discussion at Peebles Police Station, but authority was adamant that this decent pack posed a public disorder risk. Result? 200 young people who'd bought tickets wandering round Peebles with nothing to do but...drink. And of course, as Alexander was quoted as saying in the article, the town was 'swarming with police...yet they claim they couldn't let our gig go ahead because of staffing shortages'. One phrase in the front-page piece especially makes me laugh, in this sentence: 'Police have revealed that they recovered a bumper haul of alcohol from underage drinkers around the Peebles and Innerleithen area on Saturday night'.

A bumper haul: the state totters! Anyway, the gig has been rescheduled, so Alexander will get to celebrate his birthday in style, and now he's 18 years and one day old, he can - not that he will - drink as much as he damned well pleases. Get off their backs, authorities: young people aren't as stupid or as reckless as you imagine. Oh, and some of them think Shostakovich is pretty amazing, too.
Posted by David at 11:07

I remember so fondly when I first became aware of Neeme Järvi, not surprisingly, it was at the same time as I learned of Arvo Pärt. Interesting that he conducted Shostakovich's 7th. I will confess to a soft spot for that symphony (if it can be put that way, given the piece), as it was the piece that introduced me to Shostakovich, while a teenager. Only much later did I learn it was the symphony least admired. I enjoyed the "nerdy" photos, by the way, not to mention the one of your godson hidden behind the simply scandalous headline. And, of course, I enjoyed Järvi's comment about your blog, "I keep going back and back, more and more." I always learn something new from you. (By the by, in the current post over at RA, I couldn't resist popping in a link to your Prokofiev biography.)

Shucks, thanks - in the light of the Leningrad, with its seven trumpets, I seem to have been a bit carried away blowing mine.

I think I mentioned this on an earlier entry, but it was Jarvi's performance of Part's Cantus to the Memory of Benjamin Britten (as an encore!) which introduced me to his music. In c.1983 he also introduced us Edinburgh students to Credo, a stunning event.

Wow, that's quite something for an encore. Such a beautiful piece, isn't it.

Ravishing. I was reminded of other Jarvi encores. Most ubiquitous has been the Alla marcia from Sibelius's Karelia Suite, but very close behind that a kind of second Swedish anthem which always has me in tears, the Interlude from Stenhammar's 'Sangen'. Dudamel has taken that over at Gothenburg, and gives a much slower, no less effective interpretation.

Every night on the Estonian tour in the early 1990s we got the entire Dance of the Hours from Ponchielli's La Gioconda, which I've never heard before or since at a concert. The encore slot should be perfect for a piece of ballet mastery.