An outline of trees 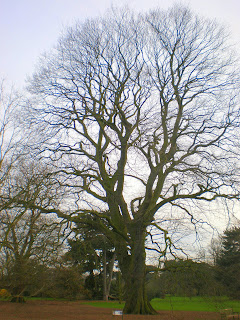 When I first started walking round Kew with a tree guide in hand all those years ago, happy just to distinguish a chestnut from a maple, I was mighty impatient for bud and leaf; the late winter just seemed to drag on for ever. Now I admire the skeleton, or should I say the frame, since a tree in winter is still very much a living thing. The specimen above is, we think, Kew's largest: Quercus castaneifolia, the chestnut-leaved oak, found only in the Caucasus and the Elburz range of Iran. Planted at Kew in 1846, its reach is the same as its height - 30 metres - and not a limb got lopped in the mighty hurricane when trees all around were falling in their dozens. 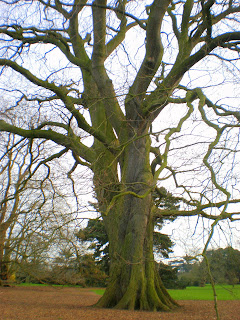 I was going to wait until our chestnutty oak put forth its leaves, for comparison's sake, but of course oaks tend to leaf last, so it could be a long wait. In the meantime, Acer opalus, the Italian maple, near the Alpine House is producing early flowers, yellow to its light green foliage. 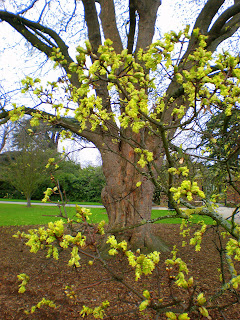 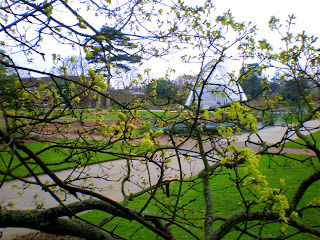 That and the magnolias were the arboreal stars when I went the other week. The budding specimen here looks good against a carpet of chinodoxas (I think: Deborah can correct me if I'm wrong. That's the Greek, by the way, for 'glory of the snow'). 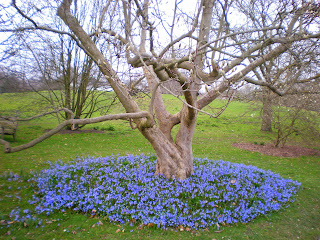 The same (again, I believe) carpet the swards sloping up to the temple of Aeolus. 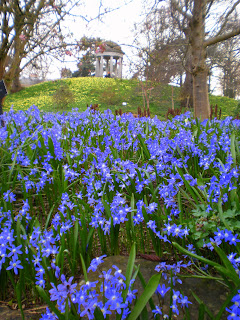 Still bare, though, is one of the oldest trees in the gardens. The famous Ginkgo biloba was planted in 1762 by George III's mother Augusta, and still going strong - as it should, because it could live for at least another 2,500 years. 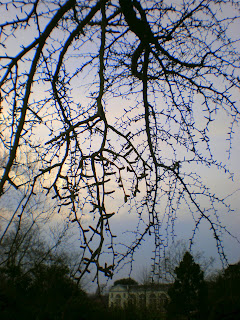 It's hard to get one's head around the fact that ginkgos were growing in this country, or whatever it was then, 65 million years ago. And like the Quercus castaneifolia, the ginkgo will probably see us all out.
Posted by David at 09:27

The ginkgo is quite something, isn't it? And I do agree about the "frame" or bones, as some call it, of trees in winter. Only once I moved out of New York City to the wooded countryside did I really understand the beauty of trees in wintertime, the way you can see through a forest of them, the way the sun casts the long shadows of their trunks and limbs late in the day. All those lovely patterns.

Ah, a nature-poet after my own heart. I was amazed to learn, as we drove up the Hudson on the way to Bard - I later learnt that the train from Penn Station is a much more romantic mode of transport - that many of your seemingly ancient, well-established woods were later replantings of deforested land, which have sprung up remarkably quickly. Aren't trees resilient beings?

David, you have a nice blog. I'd like to show your picture with blue flowers around the tree to my friends in Estonia. Thank you!

Of course, Tii. How nice to know I have a reader in Estonia - I have fond memories of Tallinn, which I visited in interesting times (1991).