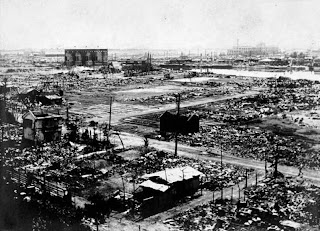 The force of the earthquake then measured 7.9 on the Richter scale - ostensibly less major than our current overwhelming catastrophe. Yet as the epicentre was closer to Tokyo and Yokohama, and construction then wasn't what it is now, at least 100,000 people died (probably 142,000, but many were never accounted for).

On 8 September 1923 Sergey Prokofiev wrote to the two Japanese musical enthusiasts who had done the most for him during his stay there in 1918 ('are they alive?' he wondered in his diary entry for that day. They were, and soon wrote back to reassure him). Here's a variant below of the photo taken back then, which shows SSP so dapper in his white suit; see the earlier blog entry for further observations. 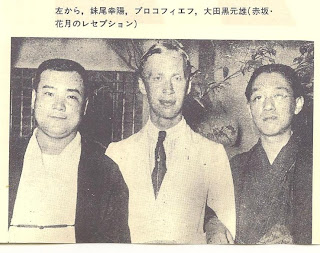 I saw copies of the letters kept in the Prokofiev Archive when I was working on Vol. 1, noting how Prokofiev had expressed concern for the survival of Yorisada Tokugawa's concert hall and Motoo Ohtaguro's home and music library. But I'm grateful to Shin-ichi Numabe, who reminded me of the exact phrasing Prokofiev used in his letter to Tokugawa, written in his neat English: 'I was deeply moved by the horrible disaster which has befallen Japan. I trust that you and your family succeeded in safely escaping it...Please accept my profound sympathy and my hope that your country will soon recover from this cruel calamity'. My sentiments exactly to Shin-ichi and Yumiko, who've simultaneously reassured me that they and theirs are all safe, at least up to a point. 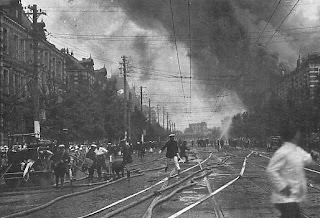 The September 1923 aftermath was indeed terrible: fires everywhere, and attacks on about 6000 Koreans who had been made scapegoats for some of the destruction and the poisoned water supplies. Of course we now have a problem to grapple with undreamt of then - nuclear fallout from the power stations which were so unbelievably built in the earthquake zone, and which provide so much heat and light for the conurbations. My blood ran cold when I heard that the city 30km from Tokyo where Shin-ichi and Yumiko both live has ten times the usual levels of radiation.

In a way, hearing these two's different experiences humanises the horror and helps us to realise that people are doing their best to go about their usual business - which is obvious, but it does seem so amorphous and overwhelming otherwise. Yumiko had to spend the night of the quake in a Tokyo bar and got home the next day to find she couldn't get into her room, because all her book and CD shelving had collapsed. She finds it hard to sleep for fear of the aftershocks (the psychological results must be incalculable). Shin-ichi spent the night in terror on the floor of a railway station. Both have been sceptical about their government's record on telling the truth about nuclear accidents. But now, at least, it seems to be honesty time. My thoughts are often with them.

A final reflection from John Stuart Mill, quoted in the revelatory, if concise, biography of Darwin I'm reading by his great-great grandson Randall Keynes: 'Next to the greatness of these cosmic forces, the quality which most forcibly strikes every one who does not avert his eyes from it, is their perfect and absolute recklessness...Nearly all the things which men are hanged or imprisoned for doing to one another, are nature's everyday performances'. Keynes continues, quoting Mill further: 'She never turns "one step from her path to avoid trampling us into destruction"; such are "her dealings with life" '.

24/3 Further to Naomi's plea below, I take the following details from last night's LSO concert programme. You can support the British Red Cross Japan Tsunami appeal in one of the following ways:

The Mills comment is a remarkable and fitting end point to this post, which so usefully and eloquently puts the matters at hand into historical context. Terrible times; I am glad, at least, your friends are safe.

Many thahks for your article, David. I'm a Japanese lecturer at Goldsmiths and Shin-ichi's friend. Please allow me to appeal to your readers: Japan needs help. Please do not be clouded by the media's cliche that the Rich Japan will revive. We'll have to, eventually but no country can cope with a catastrophe of this scale single handedly. Please do contact the Red Cross. Thank you.

Of course, Naomi, and thanks to the others for their comments. Not quite so incidentally, an Amnesty canvasser rang me yesterday to ask me to increase my donation. I was a bit irked a) that he read so obviously from a script without announcing that he was doing so and b) came so close on the heels of the last representative who asked. I upped the amount on both occasions, though, because as he pointed out Amnesty funds have been stretched to the limit by the happenings in the Middle East.

And now Japan too, over which we all grieve. And of course we will give what we can there too, realising only too well our good fortune today and the fact that it could be us tomorrow.

'Tis all a Chequer board of Nights and Days
Where Destiny with Men for Pieces plays
Hither and Thither moves, and mates, and slays,
And one by one back in the Closet lays

It is noticeable that this verse rhymes aaaa and not aaba as is otherwise FitzGerald's pattern. Almost as if this is the central conclusion of his and Omar's thought