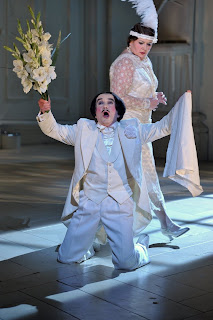 Richard Suart (pictured above with Anne-Marie Owens in the first of Chris Christodoulou's images for English National Opera reproduced here) slipped in to the Jonathan Miller Mikado under the presumably small feet of Bill Oddie back in 1988, two years after its first airing. Which of course makes this classic of the operatic world a veteran production at 25 - I've written about this at length in the programme and on The Arts Desk - and though there were one or two things which could still have been brought into tighter focus when I saw the revival last night, Suart's Lord High Executioner is certainly not among them; custom has not staled his infinite comic variety.

Credit for a couple of the gags - Ko-Ko licking the Mikado's shoes, pure Monty Python, and, having been pressed to Katisha's ample bosom, spitting out a couple of her pearls - seems to have originated with the first Lord of the Chopper, Eric Idle. But I'm guessing Suart has built on the part in many ways since those two December '88 performances. Of course his ever-adapted little list is now a sacred and still hilarious rite (the audience applauded Berlusconi's 'bunga bunga' and a last-minute reference to the equally unfunny pronouncements of John Galliano last night). I can only say yet again that Suart's book on the subject in conjunction with A S H Smyth, They'd none of 'em be missed, is a delight from cover to cover and beautifully produced. But I did reel in admiration not just at the Lewis Carroll absudity of Gilbert's lyrics for the ballad of tit-willow - imagine a bird suffering from cold perspiration and a rather tough worm in his little inside - but also the new creativity brought to it last night. 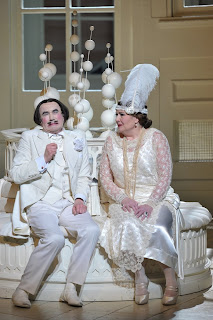 It's treated as a cautious exercise in winning over the Margaret Dumontish Katisha (Owens, it has to be admitted, had some difficulty in manoeuvring her ample mezzo around the text and being heard, though my friend Clare's young son, who loved Trovatore at Covent Garden, observed that she was surely the only singer on the stage capable of 'doing dark and heavier opera'. Well, Donald Maxwell, the Pooh-Bah, used to sing Wozzeck, but that was some time ago). In a stroke of genius, when the 'echo arose from the suicide's grave', it's Owens who sings the 'tit willow'. She's hooked at last, and Suart's hitherto abject Ko-Ko waxes Pythonsequely confident.

It was such fun being part of the 45 minute whistlestop Join the Conversation Live event expertly guided as ever by Christopher Cook up in the Coli's balcony bar (yes, we've moved from the wacky set-up in the noisy Apple Store - scroll down to read about the last event I participated in there. CC actually asked me then about Parsifal, and I said that though I know it well, I'd actually rather talk about The Mikado). I was there loftily to draw comparisons between Sullivan and Puccini: 'The sun whose rays' is as much of a mostly-pentatonic master-aria as Liu's 'Signore, ascolta'). And you could have knocked me down with a horse-feather when my fellow panellist, Michael Simkins, told me he'd played Pish-Tush in Mike Leigh's masterpiece of let's-put-on-a-show thespian shenanigans Topsy-Turvy (time to get it on DVD and watch it even more carefully). 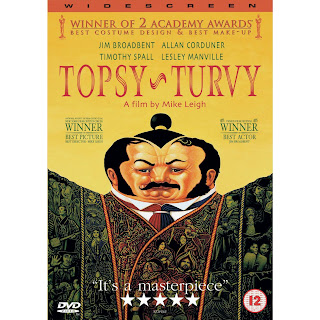 So Mike's achievement quite casts my junior efforts as Sir Joseph Porter and my endlessly recycled Nightmare-Song party trick in the shade. Even so I was quite amused, touched even, listening back to my patter of 1973 with the army of recorders and cellos (the only 'serious' instrument taught at Banstead Junior School) as accompaniment.

We also had a tasty appetiser from the Pish-Tush of the evening, William Robert Allenby, covering Ko-Ko and delivering for us the little list as originally set by Sullivan. He was allowed to make much of his relatively small role in the show itself, and I thought it was jolly nice of him after the talk to address my friend's two children, who of course had a whale of a time, especially with the special-guest wigmakers (Allenby explained that he was the only person on stage with his own hair, cut into Bertie Woosterish style by a lady of the wardrobe). Everything still looks dazzlingly beautiful in its crazy way, and it's a long time since I've heard an audience applaud a stage tableau, as they did when the curtain went up on the braiding of the raven hair at the start of Act 2. 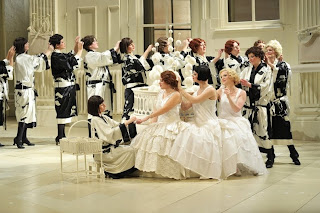 By the way, the dressing-room board of pictures the staff brought with them to the talk included a droll composite picture of Felicity Palmer playing Margaret Dumont to Groucho Marx. Yesterday I took delivery of the Bell Telephone Hour potted Mikado of 1960 starring the great Groucho - Ko-Ko to glorious former Isolde Helen Traubel's Katisha (God, that woman was a marvel, from her 1930s Wagner Wesendonck Lieder with Stokowski through to a genuinely funny duet with Jimmy Durante in the 1950s as well as this). Their scene together is one highlight; Stanley Holloway's drolly low-key Pooh-Bah is another. The abridgement can be frustrating, but it's a curiosity well worth having. 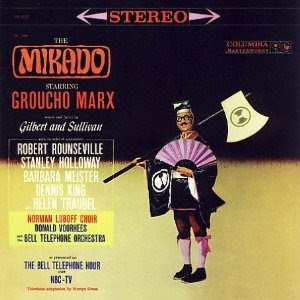 Anyway, what a timeless work of genius The Mikado still is: I don't think there's a single line of dialogue which doesn't really fit today, even if a few need footnoting. Remember I grew up knowing most of this by heart, and it really was as fabulous a verbal education as going on to learn Latin or Greek. Not every singer is a natural at the spoken word in this revival, though all sing very well indeed: Donald Maxwell's Scots dignitary Pooh-Bah doesn't quite get the laughs in the right places, and though Alfie Boe moves well, he slightly gabbles his lines. But he makes a spiffing, gormless foil for Sophie Bevan's hard-as-nails Yum-Yum - really excellent in the dialogue, consummate as she has to be in her little ray of sun- and moon-shine - and they dance well, too. 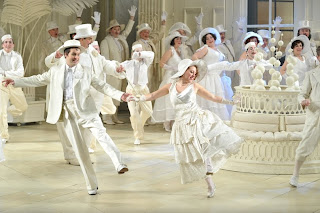 You'd have thought Richard Angas's Mikado was a hundred now, but he too puts across the text with charm, and I love the slightly furtive delivery of 'My object all sublime'. 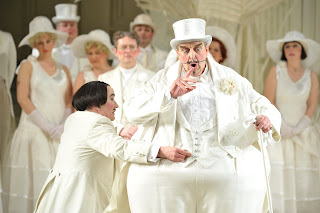 Conductor Peter Robinson handles the lovely woodwind solos well but could move it all along a bit more zingingly, a la Mackerras. Even so, the dancing is huuuge fun and the gags still work. This is a show ENO simply won't be able to replace, and although it seems to me that Miller quickly fell into wish-I-was-back-in-the-world-of-medicine diffidence, his Mikado and Rigoletto remain testaments to a once-sharp sense of luxuriant imaginative detail.

I put up this documentary on the making of the original show at the foot of the Arts Desk incarnation of the programme article, but there's certainly no harm in having it to hand here. Dig those 80s fashions...

It sounds like Rowan would enjoy this (and I know I would) so I think we may get along to it. She has just had her 1st choice of secondary school confirmed so there is some celebration to be had. But they won't be providing any "Laffin' and Grief" (to continue the Lewis Carroll theme) so it will be educational as well as enjoyable.

She was dressed as one of the characters from Little Women all day for World Book Day, and her best friend went as Alice, so the theme carries on...

Ah, Howard, this all links up - Lucien, who came with me along with his ma and sis, was also celebrating a place at a good grammar school (8 chosen out of 500, he said proudly - clever boy) and sister Jessica was at her first oper(ett)a, just about lasted, and had to go home and be hennaed to attend World Book Day as Pippi Longstocking.

Why cannot other directors equal Jonathan Miller's genius in updating the productions of operas - Rigoletto also fits perfectly. Whereas what we get is the chorus pairing off and splashing each other in two feet of water during the Grand March in Aida, or corpses being thrown into lime pits in the last act of Idomeneo, or ( as David Fingleton used to say) a lavatory on the stage, except in the case of Lulu when one gets two.

Shall we leave it at plain J Miller up to Rigoletto? I haven't seen a single one of his productions since which follows the promise of the mise en scene. I could back that up with chapter and verse as to why, but it might be wisest to leave it at that.

Originally, Pish-Tush had the wrong voice for the Mikado madrigal, thus necessitating the introduction of an "otherwise totally unnecessary character" Go To. I had the greatest problem, taking the chair for an extended conference on international investment, in dealing with the Japanese panelist - who was really called, amazingly, Go To. Especially as his contributions were pretty poor I concluded that he was totally unnecessary, and I had difficulty in calling on him without laughing

What a cast for the original Miller production - most of them became really famous. One of the essentials with G & S is that the singers should be good - at the time of the first and so many later performances the music was subordinated to the words which became very pantomime-like, maybe the main reason for the demise of the Doyly Carte company. The ENO with Iolanthe ( still relevant as a satire on the problem of the House of Lords) and the Mikado have corrected that. It may take longer to dissolve the wrong image of these brilliant works. They were at the time adversely compared with Meyerbeer ("Mr Sullivan, you should write a Grand Opera"), and how often is Meyerbeer produced now, except as a curiosity

Indeed - and I do think (though I've yet to hear the Chandos recording of Ivanhoe) that Sullivan was barking up the wrong, serious tree. There are still those who try to prove too much that serious is superior. Which is why the Welsh National Yeomen reached Covent Garden. Yet for all that it was well enough done - and conducted by great Sir Charles - as well as the fact that it contains as much good music is (probably not more than) the other great G&S works, its text seems fustian compared to the astonshing modernity of the satirical comedies.

Life is too important to talk seriously about it ( Wilde ) and anyway the masks of comedy and tragedy are the same, though seen from different sides. Those cultures and composers are deficient if they do not understand the ambiguity of the human predicament