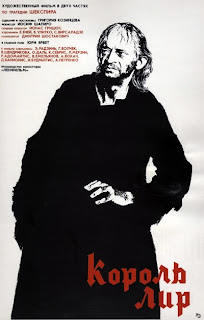 It doesn’t get much bleaker than the end of Grigory Kozintsev’s King Lear, released in the USSR in 1970 (well, perhaps there’s one exception – Klimov’s horrifying anti-war film Come and See). Silence, cinematography, landscape, music (by one D Shostakovich – the last of his 40 or so film scores), sound-montages, speech, silence again…is it possible to go further than this in the perfect, distilled marriage of all these elements?

On Tuesday evening, prior to the BBC Symphony’s Maida Vale performance of excerpts from the score tomorrow, I showed those last 23 minutes to the students, and all, I think, were stunned. One particularly commended the duel between Edmund and a disguised Edgar: no music beyond the fanfares at the beginning, few blows, much of it out of sight, and yet so brutal, culminating in an extraordinary angle on Edmund dying on the ground, upside down as it were. The burning of the settlement around the huge castle – in Estonia, I believe – takes place to the same wailing unaccompanied chorus that starts up when Edgar buries Gloucester (the sequence at the foot of this entry unfortunately starts after that – here's a glimpse of the cracked landscape through which dying father and disguised son walk).

Lear’s howls resound from a distance, high up on the battlements; Cordelia hangs above a rushing river, the camera then lingering on its eddies once her body has been cut down and removed. And the ending is better than in any staging of the play I’ve seen (though Michael Grandage's recent production starring the unsurpassable Derek Jacobi was as clear and stark as any) – the fool playing his pipe (E flat clarinet) while Edgar wanders blankly through the ravaged town. 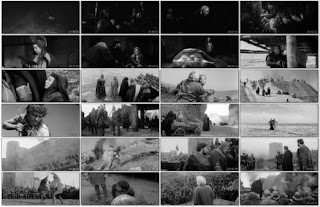 The music, too, is distilled genius by a composer who, like Kozintsev and his one-time collaborator Leonid Trauberg (pictured with him below), lived through the major upheavals of the Russian 20th century. All three were there, too, at the birth of sound film; their first collaboration, the extraordinary Noviy Babylon of 1929, was devised with a live orchestral accompaniment, in which form it sometimes still resurfaces; Odna (A Girl Alone) exists in two versions. 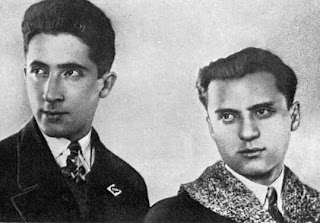 I love every instalment of their trilogy about cheeky proletarian and freedom-fighter Maxim; even when the agitprop gets stronger in the mid-1930s, you still love the central character. A shame there doesn’t yet exist a DVD with English subtitles, but this one will do. 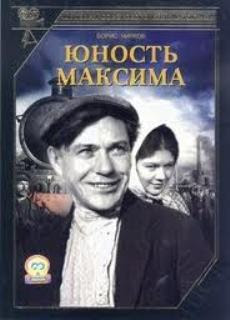 And so, passing over decades of what was perforce much hackier film work, Shostakovich arrived at Kozintsev’s Hamlet and Lear. The first may have the edge in the compelling central performance of Innokenty Smoktunovsky (though Yury Jarvet looks amazing as a wizened gnome king with unsuspected reserves); but the last masterpiece is a fusion that goes even beyond even Eisenstein’s work with Prokofiev on Alexander Nevsky and Ivan the Terrible, in that Shostakovich’s skeletal music really is undetachable from its context. A total work of art, gripping from first image to last. Here's the final sequence. Don't forget to double-click on the moving image if you want the full screen, widescreen effect (essential).

Many thanks as always for a fascinating posting.

The first time I saw Lear was back in 1964 at the Canadian Stratford. Michael Langham, a brilliant director of Shakespeare, created a brutal production that outraged some for its bleakness but resounded with younger theatre goers. He had read the play while in a POW camp during WWII and I that experience coloured his vision. Seeing this film clip reminded me of how devastating the play can be - no redemption, no bright future... just the emptiness of death and little promise for the future. Chilling but wonderful.

Exactly, Will - I imagine it resonates especially with those who've gone through a time of brutal war. The amazing thing about the film is that, despite the medievalism - which seems to me as real as Bergman's visions in The Seventh Seal and The Virgin Spring - what strikes home in the desolation is how the filmmaker and the composer would have experienced scenes like this back in the 1940s.

And in one of those connected disconnection it reminds me of the Siege of Leningrad sequence in Russian Ark - and I think its time to rewatch that wonderful film again. You always do that to me with your posts - lead me from one thing to another!

Thank you so much for making me aware of this King Lear, about which you write so beautifully. I also agree that Jacobi is "unsurpassable" and very much enjoyed your post about his King Lear.

(PS: Thank you for commenting at RA--and for your good words about Atwood's Penelopiad. I do agree that her premise was a strong one.)

Shucks, folks - not used to all these positive comments.

I warmly recommend you get hold of the Russian Film Council 2 DVD edition, with English subtitles (you have to make sure the dreary English voiceover gets turned off) - PAL rather than NTSC. I have a feeling the organisation may have folded, for their site is a blank, but when I last looked you could still get both the Hamlet and the Lear via Amazon from 'Kara's Collectibles' in the US. My Lear copy arrived very quickly:

I had always heard of, but never seen any part of this film. Thank you so much. It doesn't seem quite as viscerally cruel as the most horrifying moments in Peter Brook's stage production (the movie is somewhat softened with realistic locations) but it's sense of despair is amazingly tangible. I'll have to see the whole thing now.

I can't speak for the Peter Brook stage production, Will, but I watched the film and thought it was absolutely dreadful, in the wrong sense. It tries to be Eisenstein-/Kozintsev-ish but seems so parochial and mannered. And Paul Schofield doesn't seem any better in his prime than when I had the misfortune to catch several of his later RSC portrayals (including an Othello I've wiped from the memorybanks).

Surely only Donald Sinden could have made a less appropriate job at that time. Though subsequently Anthony Hopkins gave us the most unfathomable, whispered Lear I've ever seen. I've seen quite a few on stage, including the overpraised Robert Stephens's random interpretation, and only Kathryn Hunter and Jacobi cut the mustard.