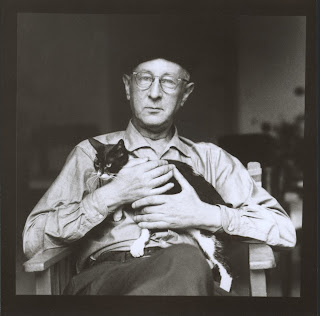 Well, we've hardly been in a desert of live music since the second instalment of the BBC Symphony/Belohlavek Martinu symphonies series at the Barbican, but I am indeed excited about the return. I do so love that cat shot, courtesy of the Bohuslav Martinu Archive in Policka, which I'm going to see, hurrah, next month. Anyway, tonight's concert features the symphony closest to my heart, the Fourth, by virtue of that slow movement which I got some stick for describing on Building a Library as the greatest since the one in Sibelius Four. But I believe that more than ever and I'm looking forward to hearing it again live (the only other occasion being the same team in the Martinu weekend some years back).

A Great Man phoned me yesterday out of the blue for a chat about Martinu (it has been impressed upon me that not all should be divulged on a blog, but I can't contain my interest entirely, so forgive any coyness). We talked about the correspondence between what Martinu put on the printed page and what he heard in his head, about Czech orchestras and Czech music, 'driving lessons' with the infinitely generous Sir Charles, and about how Martinu is so obviously one of the greats; forgive me if I still keep Korngold, also featured tonight, in category 2. 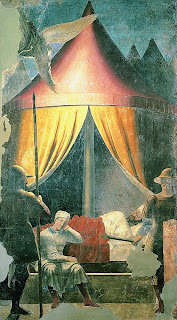 Hint about the chat: this dream by Piero della Francesca, which I saw in Arezzo on my first trip to Italy in 1982, will be coming to Albertopolis in the Summer.

Enough; do say hello if you come to my talk before the concert at 6pm this evening in the Barbican's Fountain Room. The main event goes out live on Radio 3 at 7pm*. I'm told it's virtually sold out; such is the pace of the Martinu renaissance.

Just a footnote on A Single Man, which we finally saw last night: admired the far from vacuous cinematography, respected Firth's and Moore's performances, was pleased at the sensual presentation of young flesh, but felt next to nothing for the characters. The other problem is that I'm so hypnotised by every jewel-like sentence of Hilary Mantel at the moment, as I work my way through her magnificent oeuvre, that what was read of Isherwood's book sounded flat and self-conscious. And before walking in the pouring rain to the Odeon Kensington I dropped in to Kensington Library - only to find that they've cleared out two thirds of their scores, leaving gaping holes on the shelves (so it's not even a space thing). This is happening all the time in libraries throughout London, but that doesn't make it any the less a shock and a disgrace.

*apparently not - despite the fact that the uncomfortable 7pm start has always signalled a live broadcast, this one turned out to be shunted to this coming Monday.
Posted by David at 10:25

"such is the pace of the Martinu renaissance." On my LP and CD shelves definitely, much less so in our concert halls and virtually never on the pitiful ruins of "classical" music radio in this country.

The Boston Symphony, bless it, has a minor Martinu tradition and does put on some of his music, but at wide intervals.

I retain hopes that Leon Botstein, president of Bard College who has turned his attention to Mittel Europa this year (a fully staged production of Die Ferne Klang), might take up The Greek Passion, Julietta or Ariane. Widely considered a poor conductor, Botstein is a very influential programmer. Otherwise, Comedy on the Bridge is done occasionally on college and university stages but that's about it. Sad, very sad.

I well know the Botstein phenomenon, having enjoyed two wonderful summers at Bard conferences on Prokofiev and Shostakovich. The sheer weight of concerts packed in, each one a long 'un, could be exhausting but always enriching. LB is an excellent writer and speaker. The Berg programme this year looks intriguing.

Yes, Martinu did pretty well in America in the 1940s but it hasn't paid him back well recently. Whereas we've had Mackerras to champion The Greek Passion, a superb Pountney production of Julietta at Opera North (alas, not on stage in London since before my musical time, though Jiri did a concert performance which I missed) and a stupendous fringe opera co's production of The Tears of the Knife, which is VERY lively. Garsington's Mirandolina, which also, foolishly, I missed, was commonly held to be up to less.

But JB's current series really has caught the public imagination. Hence the virtual sellout for the last four concerts.

I guess Julietta and the other surrealist pieces would be a gift to a stage designer like yourself.

Just a few notes re: Hollywood Concerto. I have made the mistake of thinking that the concerto came after the films... "the over-repeated big tune of the first movement was written for an Errol Flynn flop, the jolly japes of the finale for his more successful vehicle The Prince and the Pauper" etc.

Here were my original thoughts on the piece:

Here is the revised version after some input from other Korngold experts:

Well, I did consult Brendan's book, and I understood that, as far as the flop was concerned, the two went hand in glove. But I must check your refs (frustratingly one can't do direct links in messages, it seems).

Frankly, though I think it's pretty, I wish I cared more about Herr Korngold. But the performance was lovely, and it was a joy to watch such effortless, un-egocentric playing from the adorable Haveron.