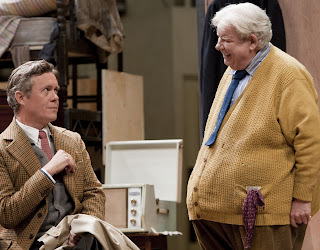 It's a messy man's world in Alan Bennett's The Habit of Art, which I finally caught up with a few weeks back at the National Theatre. Grubby, wildly entertaining but self-repeating Wystan Auden (Richard Griffiths, pictured above for the NT by Johan Persson) welcomes the buttoned-up Britten (Alex Jennings) back into his life as each unknowingly reaches the end. Britten is working on Death in Venice and the boy issue rears its head, guaranteeing the public's prurient interest.

That meeting never took place, but it's a good premise for a play. Surely, though, somewhere along the creative process Bennett lost faith and was maybe advised that this elegant double act would need more culture and knowledge than the audience might possess. So it's wrapped up in a self-referential luvviefest as the play about Auden, Britten and their mutual biographer Humphrey Carpenter goes into rehearsal. In the early stages, this provides a lot of quick-fire laughs, not to mention the bizarre moments when rotund Fitz/Griffiths is forced to don a wedding-cake-left-out-in-the-rain rubber Auden mask to promote resemblance. Jennings, of course, needs less excuse to at least suggest his genius's phiz. 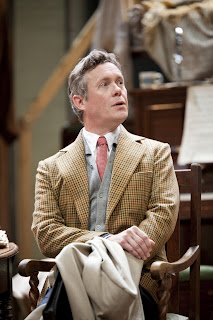 The trouble is that whenever Bennett's subject starts getting serious, he turns away. I began to be hooked and moved by Jennings' portrayal of Britten's locked-in anguish half way through the second act, but then we were back to the jokey world of the the-atre. Thank goodness Bennett has a lot more wit and wisdom than Stoppard, with all his toe-curling attempts to be clever and make little England feel it's clever too. But the end is a disaster: the wonderful Frances de la Tour as stage manager Kay tells us how someone - ie woman - always gets left out, and then there's this hideous cap-doffing to the National. Hytner and Bennett can't have their cake and eat it, complaining about elitism and exclusion and then congratulating themselves on their own little world. A shame, because there's a good two-hander in here, full of pithy comments on each man's art. That said, everyone else, including Adrian Scarborough as Donald/Carpenter and Stephen Wight as rent boy Stewart (pictured with Griffiths below), does take the actor's craft to its highest level. 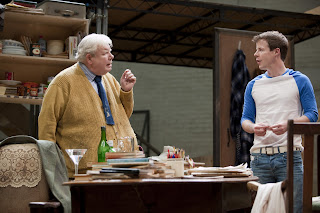 I almost hesitate to mention the fact, since gender ought to be irrelevant but sadly still isn't, but last week saw a woman's triumph in a man's world. All the talk was of Barenboim's Beethoven/Schoenberg, which I certainly enjoyed, and of Osmo Vanska's Sibelius cycle, which I didn't. On Sunday Ashkenazy made sensitive work of Elgar's First Symphony with the Philharmonia. But the best concert of the clutch I attended was easily the one conducted by Susanna Malkki (pictured below by Tanja Ahola) at the Barbican. 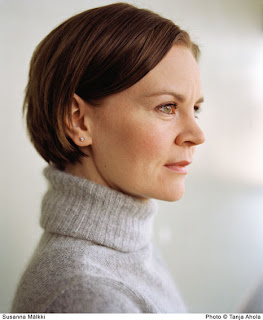 The Arts Desk review of that BBC Symphony Orchestra spectacular is here; and what a totally satisying programme it was. Yesterday I had a chance, at Maida Vale, to hear the recording of Ravel's La Valse again (broadcast is set for later this month). So controlled yet playful, sensuous yet brutal; and the BBCSO sounds like the Berlin Philharmonic. What is it about Ravel that brings out the best in these northern conductors? I'd put Malkki's interpretation on a par with what Esa-Pekka Salonen did with the complete Ma mere l'oye and Bolero at the Proms. And I repeat, I don't think there has ever been a more ravishing orchestrator than Ravel in the history of music. Discuss. 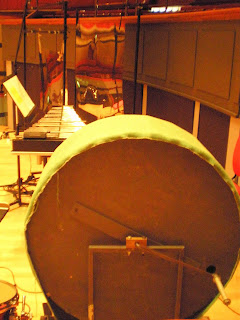 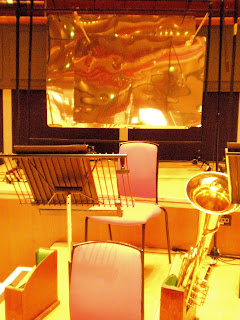 On a par was a trip to Birmingham the following Tuesday - £110 day return after 3pm, thanks Virgin and apologies CBSO - to talk about Strauss's Alpensinfonie. Hence the wind-machine, thundersheet and Wagner tuba above, snapped while I was waiting for a souncheck. Again, there's an Arts Desk review of Andris Nelsons's performance, so I won't repeat myself, but it does seem miraculous, or just good judgement, that the CBSO has a third top-notch conductor, and such a naturally enthusiastic communicator. Here he is pictured by Richard Battye. 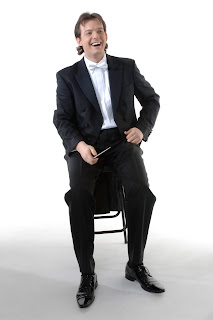 Mind you, there was all the difference in the world between Nelsons's rare bout of wild flailing on Strauss's Alpine summit, all for sweep and drive, and the preposterous ducking and diving of Osmo Vanska. My friend Cally got straight to the heart of what was wrong with his Sibelius Five: he bullies individuals rather than drawing the whole orchestra in with him. That means the whole falls into fussy details, some passages go awry (the deliberately out-of-synch meandering strings in the first movement fell into synch too soon) and climaxes don't really work. I'm not alone in feeling this, but I am in a minority. And I'm afraid it bears out the unspeakable epithet attached to Vanska by another distinguished Finn.
Posted by David at 11:35

So pleased to read that you had a similar experience at the National. Not a moment of sincerity occurred which wasn't immediately turned on its head... it totally lacked the courage of its convictions. A real disappointment... and, for anyone who has been in a rehearsal room in the last 30 years, a flagrant misrepresentation of the theatrical industry.

Yes, it's a bizarre phenomenon since, unlike Stoppard, Bennett has the ability to make his subject live. But he chooses not to - why? A psychologist could give us interesting answers.

At the risk of being accused of heresy, I personally find Debussy's orchestration more interesting than Ravel's, though I am continuing to like the music of both.

I was going to post this elsewhere, but have you yet heard Sir Charles's new Philharmonia recording of Dvorak _Seven_ and _Eight_? I downloaded the latter yesterday, and, in my opinion, it is easily the equal of his CFP recording with the LPO, if not better! The big E-Minor climax in the First Movement had my proverbial hairs standing up, and the playing and balances, with much clarity, seem _SPOT_-_ON_ throughout what I have listened to thus far, only the Second Movement remaining to be examined! Regretably the _Seventh_ is not available as a download, so will have to buy the CD if I am to hear that as well. If I do, it will be interesting to hear if he gets more bite out of his lower brass in places than he seemed to on CFP, e.g., the passage leading out of the Recapitulation into the Coda.

Since you mentioned elsewhere a friend who lives here in our Nation's Capital, I expect you, along with others, have been hearing about the nearly-back-to-back big snowstorms we had in recent days. The Federal Government has been closed since last Friday Midday or so I think, though it is due to open two hours late today. As of when I last heard, the car of the musician who helps me with certain mundane tasks is cased in ice on an icy side street, and one wonders if it can even be extricated by next Tuesday, when hopefully we can go marketing.

p.s. And, when I wrote of a passage leading out of a Recapitulation into a Coda in Dvorak _Seven_, I was speaking of its First Movement.

Debussy's orchestration is, of course, unique and refined but he doesn't have Ravel's range as far as I'm concerned.

How can anyone -- ANYONE -- of sensibility, interested in the human predicament, and in the face of so much confusion in the real world, even THINK of being involved in , or going to see, a film or a play about real events and people? It is moral and intellectual prostition. And apart from the pollution of the pursuit of truth, the practical results can be terrible - not perhaps very much in the case of Auden and Britten, but The Queen? Bloody Sunday? The Representative? Plus, though not very important, the ultimate triumph of irresponsible and careless Art over reality, Frost and Nixon.

But, my dear David, how can you possibly judge if you won't go and SEE any of these? I mean, in another context, I can laugh at the idea of Turandot set in a Chinese restaurant, but I can also change my mind if the show is good enough (and in that instance it certainly was).

My first requirement from such shows, which generally I don't like much, is that the subjects should speak as they might in everyday life, rather than spouting newspaper articles (as in Harwood's awful Furtwangler play. And I DIDN'T go and see his one about Strauss/Zweig).

But don't you see, the better the play/film, the worse it is from the point of view of truth? Whether Turandot is suitably placed in a chinese restaurant is a matter of artistic judgement, and does not touch my point about the truth about reality.One can and perhaps should play about with a work of art, for good ar bad, but not with truth

Take The Queen, widely admired. I saw the clip of the appointment of Blair as PM on TV. It was portrade as a hostile meeting. But we know enough from real documentaries and from memoires that the meeting would have been quite different. So the population at large will have an absolutely wrong view of the relationship PM/Monarch, a vital part of the constitution. In this case those putting the film together must have known that what they were producing was a travesty - but it made a better story, so why not? That is real prostitution. Though a producer who believes that he is faithfully producing truth is almost as guilty

Take The Representative. Will those influenced by that play - still relevant - have read the Enscyclical Mit Brennnenden Sorge which Pacelli wrote in 1937 on behalf of Pius XI ? Or his Christmas broadcast of 1942? Of course not

I am conscious that this is a lost cause. Let me warn for the future. Rory Stewart ( Dragon School - Eton - Balliol_ Foreign Office - deputy governor of an Iraqy province - has trecked all over Afghanistan etc etc) is a rising star and a Tory Candidate. He may become a minister. And someone is planning a film about his life. If he becomes a senior minister in due course, what will people know about him? Some producer's idea of what makes a good story

Maybe truth is one thing and art another...discuss. What I'd want in these circumstances would be an artistic reproduction of the essence, not necessarily in words that were ever used by the subjects. I think Alan Bennett does at least have the sympathetic hang of Auden and Britten; if only he'd given it a little more scope. Stoppard's view of the great and good just makes me cringe.

Ultimately we have to remember that any work like this says much more about its creator, and what presses his or her buttons in the topic, than about the real life figures on whom the characters are based.

But I agree, a wonky representation of a living person will lead a lot of sheeplike folk to conclude that this is what that person is really like.