In the name of Johnny... 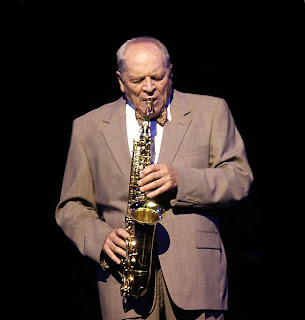 ...keep up the inspiring work, you other Dankworth-Laines. Rather mitigating my sadness at the news of the great jazzman's death at the age of 82 - read John Fordham's Guardian obit* for more chapter and verse - was the startling intelligence that widow Cleo, who must be around the same age, was caught singing a couple of months ago. And as it's the sort of voice which never seems to have substantially altered over 60 years of song, I can well imagine the results.

This is all quite a coincidence, because only a couple of weeks ago I was hunting down a CD version of an old MGM album we wore out in the Dundas Street flat during our second year at Edinburgh University. And there it was, on an Avid Jazz two-CD set with two 1950s albums by Johnny Dankworth, Journey into Jazz and 5 Steps to Dankworth. 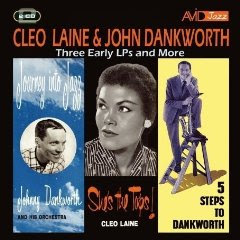 He does some curious things in homage to his many inspirations, as a rather flat-voiced narrator but a brilliant pasticheur of various jazz styles. Buy your copy here; it's less than £4.

Anyway, I sent another copy to below-mentioned Mary, now in Washington DC. She'd bought the LP for a quid or so back in 1981 but had thrown it out when it buckled on a windowsill in her Rome flat. The sound ain't great, but Cleo is Ella's free and easy, long-breathed equal in 'Happiness is just a thing called Joe', and how I laughed to recall how we all did the same at the blues line 'I love my man like a schoolboy loves his pie'. We also wore out Edna, aka Edith Piaf, but that LP has always been more easily replaceable.

*which I now see has one of the most pertinent analogies between symphonic music and jazz I've read. JD, the extent of whose educational work I'd never realised, described symphonies as the great novels of an era, jazz as its buzzy, snapshot journalism.
Posted by David at 15:18

David thanks for leading me to that lovely obit - if an obit can be considered lovely. I so many of those records and never missed a chance to see the two of them in concert when they toured North America. And once again you've led me to another book that has to go on my must read list.

I think an obit can be called lovely - so can a funeral service (the one for my friend Simon's actress mum Judy was the happiest I've ever been to: trust luvvies to put on a good show).

Just read that Cleo, their son and daughter (the estimable Jacqui, who was terrific in the Richard Jones production of Sondheim's Into the Woods) went on and performed for a 40th anniversary concert, only telling the audience the sad news at the end. Again, very much in the spirit. For once, 'it's what he would have wanted' must have been the not so solemn truth.

The Dankworth book mentioned in the obit.

The coffee shop is Sant’Eustachio Il Caffè in Piazza Sant'Eustachio near the Pantheon. They have a website, of course, at: http://www.santeustachioilcaffe.it/en/index.php

Will be in London the 18th until the 21st. Doesn't look like anything is really interesting at either Royal or ENO but just wondering what exhibitions you would suggest.

Thanks, Will. I don't know where your tastes lie (if at all) in orchestral music, but from my partisan point of view I'd say that the BBC Symphony concert at the Barbican on Friday 19 is unmissable - the glorious Martinu 4th Symphony which I loved so much when I did a Building a Library on it last year + Korngold Violin Concerto + Jiri's own 'suite' of music from Katya Kabanova.

I'll be talking about it there at 6pm, so if you were to come, it would be fun to meet you afterwards.

Exhibitions? Alas, The Sacred Made Real is finished. Ofili at Tate Modern, perhaps? The real stunner is/are the new Renaissance Galleries at the V&A. Would repay countless visits.

I was disappointed to see no reference to basset hounds in your earlier blogs about dogs. Always kind and gentle, except when pursuing quarry, NEVER petty or small-minded, with almost supernatural scenting and tracking abilities, they are really the best of all dogs. You can confide your most sensitive, embarrassing, guiltridden angsts and hangups to them and in their empathetic, melancholic, monklike expressions you will find an ocean of sympathy, understanding and affection. They do need a LOT of exercise, but still they are brilliant and highly intelligent. I knew a man who taught one how to use a cashpoint so long as the beast was lifted up to the machine. As Lord Byron wrote of his own hound, "Beauty without vanity, Courage without cruelty".
James Endean, Merton College Oxford

How could one resist so eloquent an argument? I shall elevate the segugio (?) di bassetto in my mind alongside the admittedly more truculent terrier delle (?) Marche.

Sorry David, I meant to respond but got waylaid by a trip to Parma for Il Giorno di Regno. The V&A galleries are now on the list - Renaissance is very much to my tastes which means I am living in the wrong city. I don't know much about Martinu but if I can talk my spouse into it, it may be a good chance to listen and learn. I had thought the Habit of Art but it is sold out though your review suggests that despite its flaws it would be an evening well spent.

Thanks for the suggestions.

Yes, it is indeed sold out for the run. You might enjoy activist Bette Bourne's autobiographical rambles with Mark Ravenhill at the Soho Theatre. I loved the first part when I saw it in Edinburgh, though it's been much condensed and, some feel, has become a little self-conscious. He's always been a marvellous actor, though, and what he has to say about coming out in the late 1950s is fascinating.

And, as I mentioned Over There, the Paul Nash exhibition at the Dulwich Picture Gallery sounds unmissable.