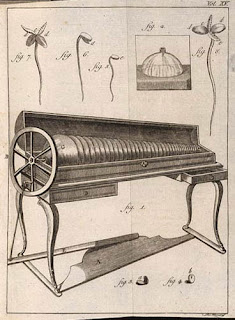 I refer not to the unearthly twitterings of Donizetti's coloratura heroine, but rather to the instrument he originally thought of using to give her a further otherworldly dimension. A glass harmonica, exactly like Benjamin Franklin's pictured above*, was one star in ENO's revival of Lucia di Lammermoor last night. The others were that increasingly great Italianate tenor, wee Barry Banks; the sets by Charles Edwards; and the costumes by Brigitte Reiffenstuel. More on that, perhaps over-flippantly and with apologies for any disrespect to the fitfully inspired pisseur of Bergamo, in my Arts Desk review.

There was a detailed and as always entertaining programme article on the opera's genesis by Roger Parker. He told us how, following the completion of Lucia in 15 days, the glass harmonica player at the Teatro San Carlo turned out to be mired in litigation with the opera house management, prophetically enough because a flute had replaced his much ghostlier sounds in some ballet or other. So Donizetti did just that himself as a kind of insurance policy before the first performance, thereby setting a precedent for countless other mad scenes with flute, not least Mad Margaret's spoof in Gilbert and Sullivan's Ruddigore and the one for Peter Pears as Thisbe parodying Sutherland in Britten's A Midsummer Night's Dream. The original version of Lucia's Mad Scene is, of course, much stranger and more poignant than the one we always heard until recently. It doesn't even have the catch-me-if-you-can duetting between voice and instrument, apparently added long after Donizetti's death for Nellie Melba.

Who else wrote for this singular forerunner of the celesta? Mozart, Glinka, Saint-Saens for his Carnival Aquarium and Strauss when the Empress acquires a shadow in Die Frau ohne Schatten. Nowhere does it sound spookier than adorning Donizetti's often earthbound music.

It features in a far more gripping vocal performance of the Mad Scene than the one we saw last night. Dramatically, that could have been powerful, with the traumatised Lucia wandering the empty stage, but Anna Christy didn't have an ounce of Natalie Dessay's intensity. I've only once been caught up by the unfortunate bride of Lammermoor's predicament on stage - back in the early 1980s, when a Canadian soprano called Pamela Myers, following a much-praised Ashley Putnam, reduced us all to tears at Scottish Opera.

Wish I'd been at what I'm guessing is the Met for Dessay's tour de force (and isn't that dishy Mariusz Kwiecien as the wicked brother?). The film of the whole thing is divided into three parts on YouTube, in a performing edition which mingles original and celebrated revision. I recommend you watch it all, but here's the cabaletta, which features the glass harmonica right at the beginning.

*Aren't these the sort of things we should expect to see displayed - and demonstrated - in set-ups like the V&A's threatened collection of musical instruments? The point being that they should be played, not kept behind glass cases as they are now. The V&A needs to rehouse its collection with a curator who cares.
Posted by David at 22:31

As you monitor Parterre, you may know that the xenophobic (more precisely Anglophobic) crowd that posts there savages Barry Banks regularly. At NYCO in Ermione and La Donna del Lago he gave quite wonderful performances.

Dessay's Lucia was a good experience at the MET the year the performance was new.

Mariusz Kwiecien, on the other hand, showed there and elsewhere a distressing tendency to over-sing and to artificially darken his sound. I'm very sensitive to this as I've watched so many of our talented young singers wreck their voices by trying to jump from light lyric to dramatic in five easy self-destructive stages. Very sad--I hope somebody stops him before it's too late.

Oh dear, wouldn't it just? Actually I wonder if this isn't just encouraging the harpy, but I did note that my estimable colleague Rupert Christiansen wondered about Brian Mulligan's Enrico 'why was it necessary to import him from America when we have so many terrific young baritones here already?' I wonder if he's doing it on purpose to feed the trolls.

Sorry to hear that about Kwiecien (I've never seen him on stage, but he's quite a compelling Onegin in the Bolshoy production).