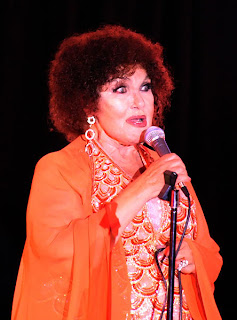 I've never posted twice before in the same day, but further to my tiny Dankworth homage below, some news from Sebastian Scotney of the LondonJazz site made me so jolly. Having already performed with her two children at a 40th anniversary concert on the night of Johnny Dankworth's death, Cleo Laine has once again insisted that the show must go on at Pinner's Parish Church this Saturday.

It's against my own interests, as I don't know if I can free up that evening to go and by then all tickets will be sold, but Sebastian advertises the event, with a link, here.

I combed YouTube looking for my favourite track from the 1957 album, 'Happiness is just a thing called Joe' - bit close to the bone, if you substitute 'John' for 'Joe' - and found this film of Cleo and Johnny in 1965, which will certainly do.

*The title, by the way, of a 1930 film starring and produced by Gloria Swanson. She asked Prokofiev to write the music; he declined, and the honour passed to Vincent Youmans of 'Tea for Two' fame. All this revealed in letters at the Serge Prokofiev Archive.
Posted by David at 18:15