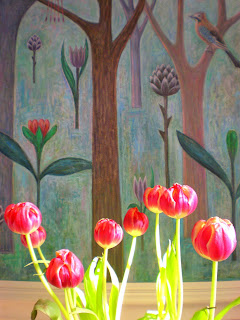 Most blooms remain indoors at this time of year. It's the only season when I'm reduced to buying cut flowers - except for peonies in June - and while I wait for the Banja Lukas to pop up in the soil outside, these tulips have lasted well as complement to Ruthie's 'fantasy garden'. They started out, all tight and close, over a week ago like this. 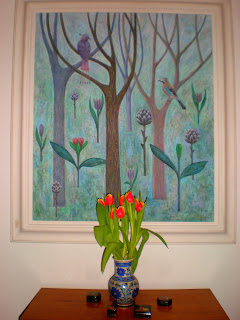 Yesterday, after endless stretches of drear and damp, the sun came out. It still wasn't like those false harbingers of spring we usually get around mid-February, but as I'd seen precious little hint of bloom or bud, other than this magnolia outside the Marshalsea church at the start of the year 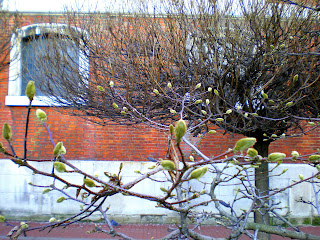 I took an hour off work and cycled around in search of snowdrops. I found clusters on a few graves in an otherwise bleak, scrubby looking Brompton Cemetery, just before the balls of a redoubtable officer 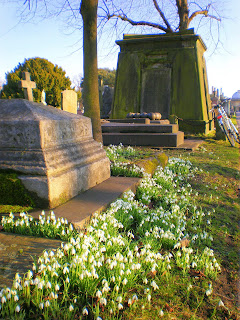 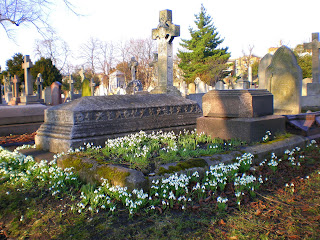 and then went on to Chelsea Physic Garden, which promised to be a galanthophile's paradise but wasn't. Even so, there was the odd clump in the woodland zone 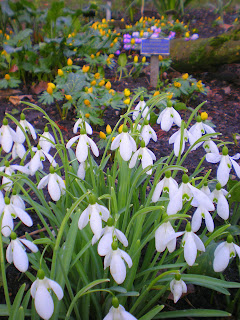 and it was good to see what else might flourish. The hellebores are out in force, and the Chinese Winter Sweet (Chimonanthus praecox) is spreading a heavenly sent from its waxy yellow flowers, caught in the late afternoon sun. 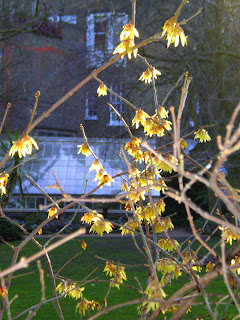 Along the eastern walled garden border where later the echiums wax gigantic, new bracts are springing from a Madeiran visitor, Melanoselenum decipiens. 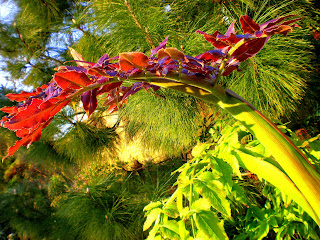 Sub-tropical it may seem, but further along the fruit trees still need shielding from the cold. 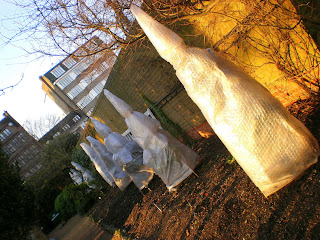 In short, we're still in the grip of that extended winter which is the subject of Ostrovsky's - and subsequently Rimsky-Korsakov's - 'spring fairy tale' The Snow Maiden (Snegurochka). Daughter of Frost and Spring Beauty, the otherworldly girl will melt when touched by love and the sun's rays. Here she is as portrayed by the great Nezhdanova. 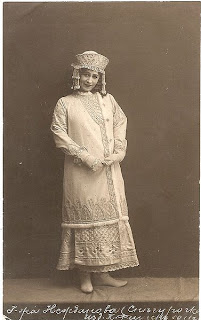 I put together a selection of Arkhipova singing shepherd Lel's soulful songs for the students on Monday, and I posted another YouTube track on The Arts Desk but I also came across Elizaveta Shumskaya, a bright soprano I'd never heard before, in Snegurochka's first aria. Quite a discovery.

Would you believe that there were actually people in our building complaining about snow removal being done in the middle of the night, even though we all, or most of us, wish to be quit of all this remaining snow? To be sure, people require their sleep to be at their working best, but, in this instance, can we not endure the short-term pain for the long-term gain? Yet, as I say to people, the longer we have to wait for Spring, the more we hopefully will appreciate once it _DOES_ get here!