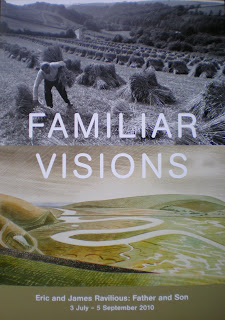 Having pompously thought of myself as 'citoyen du monde', I realised how through this blog Englishness seems to have become a recurrent theme in my middle years; English churches, music, paintings, books keep popping up in the cosmopolitan mix like an inescapable rondo theme. I hope I'm no would-be ruralist reactionary, but I'm not ashamed to declare how passionately fond I've become of the works of Eric Ravilious - through that superlative Imperial War Museum exhibition 'Imagined Realities' - and Edward Bawden.

Their sons have followed the tradition in their own different ways, too. We made sure to catch the last day of the 'Familiar Visions' exhibition featuring the works of Eric and James Ravilious in the father's old stamping ground of Eastbourne, where the new Towner Art Gallery tucked away unsigned alongside the Congress Theatre houses quite a collection. And while I marvelled again at Eric's sometimes disconcerting mix of straight lines and curves, the human and the natural, in those now-familiar watercolours, it was the photographs of his son, born only a few years before his untimely death in the Second World War, which brought tears to my eyes.

Almost immediately, in fact, with a vast 'View towards Iddesleigh and Dartmoor, Devon, leading you into infinity down a lane between frost- and sheep-covered fields. I don't know why, but I felt I knew and loved this scene at first sight (in a sense, I do). But James wasn't just a poetic black-and-white snapper of landscapes. He got to know and be trusted by the local community, and took about 80,000 images recording a vanishing way of life for Devon's Beaford Archive. He never posed his subjects but caught them in action - stooksetting, muckspreading, lambing, shearing, orchard-shaking. His favourite subject, old farmer Archie Parkhouse, must (I'm crudely guessing) have been something of a surrogate father figure - Archie, James and his idol Cartier-Bresson all shared the same birthday. Here's Archie taking ivy for his sheep on the cover of an indispensible book: 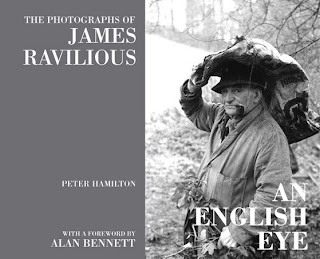 Apart from the fact that I can't seem to contact the Towner for copyright permissions, I don't think that otherwise reproducing some of the photos here would do them much justice. You can, though, see the entire half-hour documentary narrated by Alan Bennett on YouTube. As usual, I recommend clicking on the picture once you've started to get the fullscreen version over on the site proper.

James comes across as such a sincere, gentle man. He certainly wasn't trading on the 'Ravilious': when he went to St Martin's College of Art, he took another name. And you never get the feeling that the Devonians felt some toff was intruding on their turf.

I should finally point out that the exhibition - finished now, alas - covers much more than just photos and watercolours. There's also a wonderful room half-filled with Eric's woodcuts, which I heard some of the many visitors declaring they liked best. And it's quite a size too - four sizeable galleries, all well themed and, in the case of Eric's work at least, complemented by eloquent if slightly over-interpreted commentaries. It makes the South Downs exhibition on the first floor seem rather tame by comparison.
Posted by David at 09:54

Interesting blog. I worked with James Ravilious years ago at the college where he taught in the art dept. A charming and unassuming guy.

from Dr Edward Barrett
re a previous blog about classical music CDs slowly disappearing: the principal reason for this is that digital downloads are becoming increasingly high quality, beyond mere MP3 quality, and some downloads are now the same as an SACD, therefore better than an ordinary CD. In other words, the original 24-bit recording, which can be downloaded intacta, as it were, now has to be DEGRADED for simple CD quality. It is highly likely that in 15 years time all our classical music will be in DSD or SA quality hard disc memory, and CDs will be regarded as eight-track cartridges are now, ie.completely defunct.
Dr Edward Barrett

Interesting, I hadn't realised that. I've placed my perhaps naive faith in the survival of classical CDs in the fact that music lovers like the full product in the hand - the notes, the presentation.

Possibly I'm fooling myself because I still find liner notes, librettos etc in book form enticing. But the home ogre here is urging me to let all my CDs be swallowed up in Martin Brennan's much advertised new machine.

from Dr Edward Barrett
I would be very wary of the Brennan machine hype - I have yet to see a really expert sound analyst give a serious opinion on them; all we have now is very clever marketing, backed up by a brilliant self-publicist(Brennan is a kind of James Dyson of hi-fi, daring to go where no other has etc, messiah of the vacuum cleaner, etc).
It may be all completely based on evidence, but until I see this evidence presented by an expert and using impartial analysis, I will be sticking with my CD collection and ignoring the Brennan players' hype. Luckily I have a wonderful UNISONRESEARCH CD player which is made in Italy and is really excellent.
Caveat emptor! Edward Barrett

Well, that's music to my ears, at any rate. Mr Boom-Squish may feel otherwise.