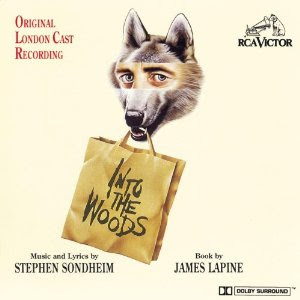 I'm obsessed. By the master's infernal, internal rhymes; by the little bean-cells that sprout tunes; by the whole intricate fairytale-meets-human-dilemma machinery of Sondheim's Into the Woods. Having seen that far from perfect Regent's Park production, I ordered up the original London cast recording to take me back to the palmy days of Richard Jones's show (I went twice, and the second time I took my pal Stephen Johnson to convince him this was up there with the greats. He agreed).

Well, further examination leads me to an outlandish claim: this stands in the same relation to Sweeney Todd as Britten's Turn of the Screw does to Peter Grimes or Billy Budd. It has something like the same thematic rigour, the same symmetries, and even some equal felicities of chamber scoring from Sondheim's inimitable house orchestrator Jonathan Tunick.

Most of it doesn't work out of context. But the track I've been playing over and over again is Julia McKenzie's Witch delivering the apocalypse-now of 'The Last Midnight'. It's the apogee of what I'm guessing is Sondheim's (and Tunick's) obsession with Ravel's scarier waltzes. Especially the burbling clarinet against my favourite lines (witch to world: 'You're just nice. You're not good, you're not bad, you're just nice. I'm not nice, I'm not good, I'm just right.')

Alas, it's not on YouTube; you'll have to get hold of the recording for yourselves. But what I did find was sublime Julia performing Sondheim's wicked Astrud Gilberto spoof 'The boy from...' She does it deadpan, and savours the place-names like no-one I've heard. All as a riposte, I'm guessing, to Kit and the Widow's famous parody 'People who like Sondheim'.

As for 'The Last Midnight', the best I can do is a piano-accompanied version by the Witch of the Regent's Park production, Hannah Waddingham. It will give you some idea of the number's insidious genius.

The Guardian's Martin Kettle claimed that instead of concentrating on his interview with Tony Blair last week, he was plagued by the 'earworm' of Mahler's First Symphony. But I came away from the beautifully played, more questionably interpreted Berlin Phil/Rattle Prom featuring that wonderful work and found myself earwormed by 'The Last Midnight'.
Posted by David at 09:11

hello dearest,
I guess you are in Switzerland? I am in Sweden! (see blog for explanation)Last night there was this Eurovision thing: Rigoletto from Mantua with Placido Domingo live-the second act tonight. I thought it was very good, but what do I know? As you know I am a musical philistine.. It seems to my untrained ear that Rigoletto is very Mozart like? In comparison to Verdi's other operas?
Biggest hugs to you and the Diplo-mate
xS

No, back in town (though down to Eastbourne for the last day of the Ravilious exhibition today - just come home).

Saw your great news about mama marrying the New Lover of 13 years and wanted to send felicitations - then realised I'd never met them so it seemed a bit presumptuous. But what a very Sarinesque thing to do to turn up unexpected in the church all the way from Mali. You are a one.

Missed the Eurovision Rigoletto but I s'pose there are Mozartian things about the elegant bits in Rigoletto. Muti always reminds everyone in interviews how Verdi kept the score of Don Giovanni on the piano at Sant'Agata and thinks it was his supreme God. xx

PS - since caught a bit of the Mantua Rigoletto on BBC4 last night: the final 15 minutes, in fact. Domingo dripping sweat and tears over a very good Gilda outside the castle (rather than the shack) that Sparafucile and Maddalena seemed to be living in. Somehow it didn't move me coming straight in like that, and then up popped Katie Derham to tell us how we should all be feeling about it. Ponnelle did a film like this with Pavarotti, and it seemed visually more atmospheric to me.

hello again,
how good you managed to catch a few minut3s of it! i missed the last bits because got the timing wrong and was picking lingonberries instead...
How amazing you say that Verdi kept the score of Don Giovanni at hand! I could have sworn it!
all love
Sophie

So nice to hear- and from a music critic, at that- a proper appraisal of this masterpiece.

All the theatre reviewers I've seen have patronisingly dismissed the show. All those more-in-sorrow-than-in-anger words like 'problematic'. Some numpty at the Telegraph even scoffed at the 'triteness' of the lyrics. What the hell were they watching?

Indeed, Jon - the only person who doesn't look at me as if I'm mad in my current crush is Ed Seckerson, who as you might expect also believes that ITTW is the Turn of the Screw in the Sondheim oeuvre.

I'm even getting hooked by songs like 'Giants in the sky'.

Sondheim always chucks in the line which elevates a song into something more complex and more meaningful, especially in ITW- you mention 'Giants in the Sky' which hits you with 'And you wish that you could live in between'.

As the uncle of a 4 year old (the closest I'll ever get to being a parent, I suspect) 'Children will Listen' reduces me to floods, and as the son of a dead father 'No More' finishes me off completely.

Anyone who accuses the work of being trite, or of saying obvious things about fairytales, is missing the rich and wise and hurt humanity that runs through the whole thing.