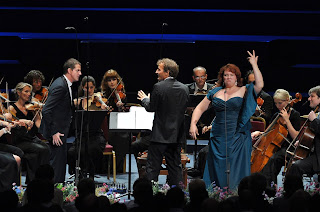 etc. And even then, I've still one more Prom to go tonight. Would have been quite happy, though, to take my leave with the quite unexpected fireworks of Monday's late-nighter featuring the ravishing-toned Philippe Jaroussky and irrepressible true contralto Marie-Nicole Lemieux (pictured above for the Proms by Chris Christodoulou, who also took the below shots and whose copyright they all are. We hope he'll be featuring in an Arts Desk Proms photo retrospective on Saturday).

You can read what I thought about it here. And it seems like an appropriate place to thank the Arts Desk for pushing me in unpredictable directions, since a baroque late-nighter of Vivaldi, Telemann, Handel and Porpora isn't something I'd have chosen to go to myself. Especially after a Prom I truly did want to hear, the RSNO concert of Berlioz, Beethoven, MacMillan and Respighi, because I knew what to expect from the wonderful Stephan Deneve. I stayed on to hear fiery Corsican Jean-Christophe Spinosi and his Ensemble Matheus only because colleague Alexandra had to call off due to the tube strike. And like most, though not all, of the audience, I found Spinosi's febrile intensity irresistible, especially in the final stamping, hollering tziganery of the Corelli Concerto for recorder and flute. Here he is sparring - as I gather he does to the point of fisticuffs - with his players 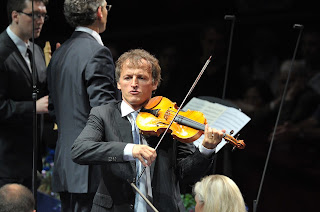 and with his delightful soloists after an anything-you-can-do adaptation of a Vivaldi aria for rival divo/a/s. One BBC Messageboard contributor even thought that Jaroussky and Lemieux were giving us a Kenneth and Hattie after all that refinement and passion. 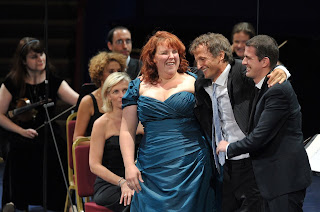 Anyway, the Proms are nearly over for the year but the Arts Desk has barely begun. That I hope nourishing source of thought and feeling, which has given me free rein to dip into theatre, ballet, cinema and TV as well as my familiar stamping grounds, celebrates its first birthday today. I'm a little younger than that in TAD terms, but I feel old in contributions. Here's to hoping it continues to take off and finally earn us a crust or two as well as the sheer, sometimes indulgent pleasure of culture-vulturing at length. 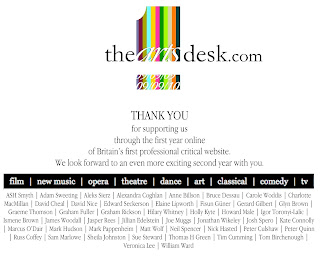 Yes, it was an great experience!
Thank you for your review as well as for the wondrous pics! I guess, I saw you making them....
And of course, Hatima Tova for you, too !

Not I, anon (were you a perfomer or a spectator?) - that was, as I tried to highlight, the marvellous Chris Christodoulou who's been photographing the Proms throughout and many of whose other pictures adorn the Arts Desk reviews. We publish his personal choice there on Saturday.

You are such a lucky man - in so many ways! But getting to hear Jaroussky and Lemieux - now that to me is sheer pleasure. Saw Jaroussky at the 2009 Whitsun with Spinosi and Ensemble Matheus. Though I wanted to slap Mr Spinosi for the non-stop clowning he felt was necessary when he began to play I forgave him everything. And I can only wish that your Arts Desk reports multiply so that I can read them with both envy and delight.

from Ian Donaldson
I couldn't agree more with DrEdward Barrett(please see your blogs,passim). The Brennan machines might be the greatest thing since the invention of the gramophone needle; on the other hand they may be nothing like what they are cracked up to be - only time will tell. Do you remember the hype about the supposed indestructibility of compact discs in the early 1980s when CDs first appeared? We now know that claim was baloney; CDs can wear out eventually, so these promises were just hype. So too might well be the case with Brennan and his transcendent machines.
By the way, the correct greeting is "Shana tova", or "guten yontiv" if you are speaking Yiddish.
Ian Donaldson(non-Jewish)