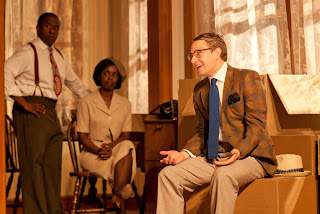 As word-rich as Jez Butterworth's Jerusalem it isn't, but Bruce Norris's Clybourne Park has enough thoughtful entertainment value to transfer from the Royal Court and earn a respectable West End run. It's a true ensemble piece, a bit like a more conservative, realistic version of Caryl Churchill's Cloud Nine inasmuch as the seven actors from the late-fifties first act turn up in different roles half a century later in Act Two.

Did you recognise The Office's Martin Freeman up top? Not many in the audience did at first, as he preaches a barely covert form of neighbourhood racism while home help Francine (Lorna Brown) and her husband Albert (Lucien Msamati, fresh from his touching role in the Almeida's Ruined) look on. The production photos featured here are by Johan Persson. 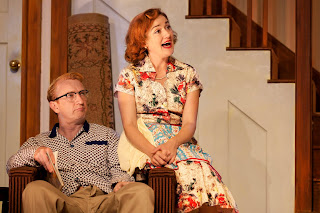 Bev and Russ, the central figures of Act One, are a suburban couple recently bereaved by the suicide of a son who's done unseemly war things to civilians in Korea. The husband (Steffan Rhodri) isn't prepared to hide his depression and anger; Sophie Thompson as the wife overdoes the false brightness at first, but is immensely touching towards the end of the act as she tries vainly to communicate with a flabbergasted Albert: 'Maybe we should learn what the other person eats. Maybe that would be the solution to some of the - If someday we could all sit down together, at one big table, and, and, and, and...'

Act Two shows us that in 2009 everybody is tasting everybody else's food: the black couple have been to Prague too. But nobody is really sitting down at one big table, even if they've come together to discuss a white couple's plans to pull down the same old house and infiltrate what has now become a predominantly black middle-class neighbourhood. 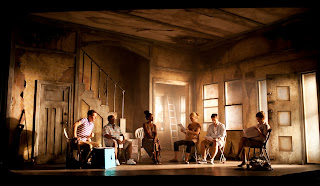 This is where the dialogue truly crackles, culminating in an outrageous stream of racist jokes from both sides. It's a participatory experience - you can hear the audience gasp, tut and finally collapse in helpless laughter (well, you could on Thursday night when I went).

I'm not sure about the point of the quiet coda, nor quite how much this play will stay with me in the long term, but it's beautifully designed (by Robert Innes Hopkins), hauntingly lit (by Paule Constable) and incisively projected by a fine team of actors.
Posted by David at 10:14