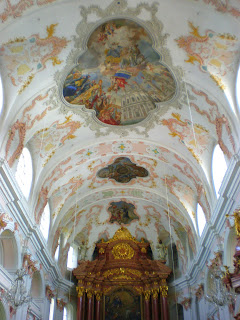 The Swiss, don't you know (I didn't until recently), are a lot more interesting than The Third Man's cuckoo-clock jibe would have us believe. As Jan Morris, whose Europe: An Intimate Journey accompanied me along with Ulysses on our little rest-cure, puts it, his fellow officers in 1945 would have welcomed the comment. It came, of course, four years later. For them, though, it would have expressed perfectly 'the sour judgment of a battle-scarred, impoverished imperial kingdom of epic suffering and performance upon an comfortable, well-heeled, chocolatey republic which hadn't done a damned thing to save civilization as we know it.'

Morris's own view doesn't stretch to the more recently uncovered extent of Switzerland's compromises in the First and Second World Wars, compromises which seem to have sprung all too easily from the ambiguous nature of its safe-haven status. The recent minaret debacle has done nothing to endear Switzerland to the rest of Europe. But in the long term, I think I share Morris's fundamental stance:

The Swiss are the one people who have given dignity to the idea of the Nation-State by turning it into a State of Nations, to my mind a model for us all. They have not compromised either their Statehood or their nationhoods. Their four languages [French, German-ish, Italian, Romansh] remain more or less unviolate, but in all their autonomous cantons the Swiss are the Swiss.

Having spent time in the Valais and central Switzerland in close succession this summer, I can appreciate a few of the differences (though we still need to go walking in the Romansh valleys further south-east). I also find it intriguing that after quite a few nasty conflicts, the more powerful Protestant cities established a modus vivendi with the Catholics, holding the fragile Nation-State together. After 1874, in fact, it was race rather than religion which threatened to tear things apart.

The gulf hadn't occurred to me until I spent more time in several different churches in democratic Zurich and patrician (but Habsburg-resistant) Lucerne. St Peter's (first picture up top) dates from the 13th century and its 16th century clock face is the largest in Europe, overlooking a very pretty square 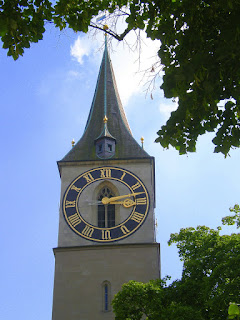 but the greater part of the interior was remodelled in 1705. You can just about see the Hebrew lettering above the gospel text, 'legacy of the Reformers' desire to reclaim the fundamental sources of Christianity' as my guidebook says.And the plasterwork is very lovely. Then you find yourself in a Romanesque choir with some rather attractive wall painting. 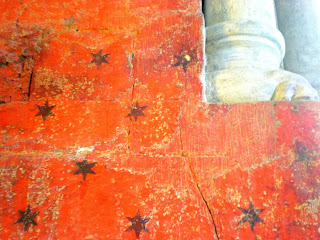 Along with the equally light and airy Predigerkirche, it's my favourite of the Zurich churches. The Grossmunster and Fraumunster have distinctive towers/spires to grace the wonderful skyline, and famous glass (I prefer the Giacomettis to the Chagalls, at least closer to) but rather gloomy interiors.

Lucerne's three big churches all have their glories. You may remember from an earlier entry that I visited the Hofkirche just before Easter. This time I managed to catch up with the other two. The Jesuit effect (second picture up top, 1673) could be predicted from the big 'uns in Rome and a regular haunt in Vienna. That extravagance lines the Reuss 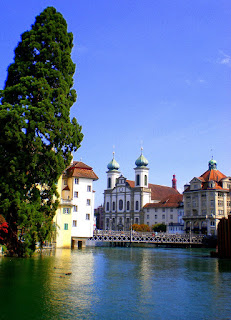 and its neighbour is very different, the Italianate Renaissance Rittersche Palace, still the seat of the cantonal government 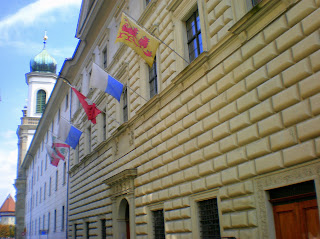 while the bigger and older number, the Franziskanerkirche, has its own grounds - formerly those of a large 13th century monastery - tucked away behind the Jesuitenkirche. It's much more of a jumble of styles, all intriguing. 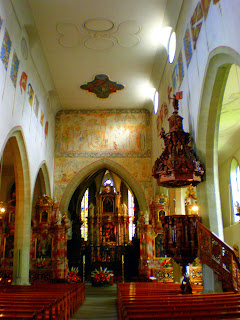 Flags were painted on the nave walls in 1625 after the original battle-snatched standards had been removed. The painted images were twice restored, at the ends of the 19th and 20th centuries. 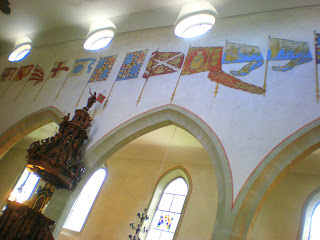 The outlandish mannerist pulpit is by Niklaus Geisler of Schweinfurt and dates from 1628. 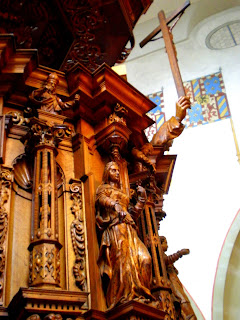 A final flourish comes from the late 17th century plasterwork angels of the north chapels. 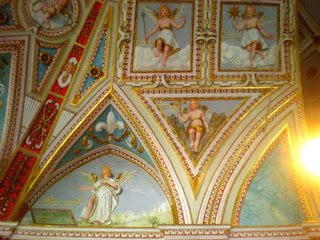 It was an exhilarating if exhausting afternoon, temperatures rising fast: the grey, humid pall hanging over the start of the holiday had lifted by noon as the four-day heatwave began. So we found it a bit of a sweat doing the circuit of the town walls 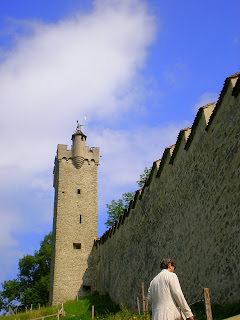 but worth it for the views over city (including the KKL, home to our stupendous Lucerne Festival Orchestra/Abbado experiences) and lake from the top of the Schirmerturm. 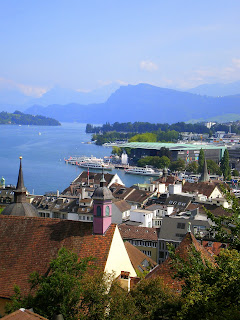 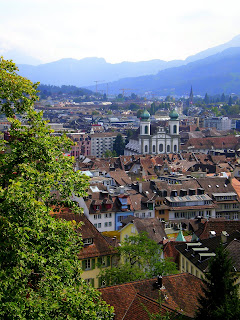