Careful the things you do... 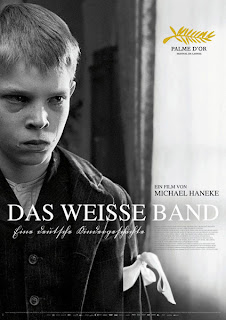 ...children will see and learn. Yes, I know, Sondheim gets preachy here, and preachier still in the climactic 'No-one is alone' as Into the Woods goes all gooey, though I swallow even the latter from direct performers like Jenna Russell in Regent's Park or Jacqueline Dankworth on the London cast recording, which I finally bought off Amazon in an attempt to relive two happy performances. It was that production's director Richard Jones, by the way, who told me in an interview that he parted company from Sondheim in the last stages - 'because it's just not true that "no-one is alone" ').

But it's a sound enough message when linked in - as everything in that uniquely planned, symmetrical score is - with an earlier passage (the Witch's 'Children won't listen'). And it seems to be the message of an almost unequivocally dark masterpiece, Michael Haneke's The White Ribbon, which we finally saw at the weekend. The setting is rural Germany on the eve of the First World War. The first thing to say is that subject and cinematography are one: the dazzling, digitally-enhanced whites of summer party and harvesting scenes, the near-black interiors. Good may flourish in the dark, when for instance the teacher-hero plays the harmonium by gaslight to soothe the distress of his just-dismissed governess girlfriend, and white can be bad, like the painted door behind which the pastor punishes his dysfunctional children. 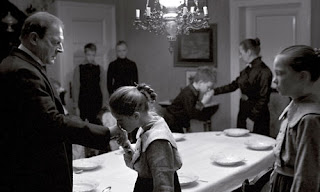 It's a bit like Bergman, but with less humanity (only the honest narrator and his slightly freaky-weird love fumble towards honest living, though you feel the powerless women of the various households want to help). Indeed, the scene where the doctor tells the midwife he's been sleeping with of his disgust for her smacks of the hapless uncle and his wife in Fanny and Alexander. But there you get to understand why Carl's become the way he has. The parents in Haneke's world are just symbols, it seems, of a decadent old-world, sado-masochistic discipline and carefully concealed abuse that the anarch-children serve to mimic or to challenge. For the whole drama to remain shrouded in mystery, it depends on the victimised children not to identify their attackers, and maybe I found that a bit hard to buy.

Yet the atmosphere of unease is compulsively suggested from the start, and there's something in common with James's The Turn of the Screw, about which the wisest comment I read was that the Governess wants the children to be too good, and the 'ghosts' want them to be too bad. And the performances in The White Ribbon, from the kids especially, are haunting and real. There's a clip on YouTube of the unforgettable scene in which the doctor's young son questions his sister about death.

Taken in the round, it's a masterpiece, and I can understand why Abbado was so impressed that he wanted Haneke to direct a new production of Berg's Wozzeck.

The debate about how much children will listen, see and learn has been a bit stoked up by sundry productions of Humperdinck's Hansel and Gretel. Laurent Pelly's reasonably light-of-touch Glyndebourne take on consumerist wastefulness came to the Proms last night, all its messages intact in the semi-staging and all involved glistening and shining under the silky baton of Robin Ticciati. 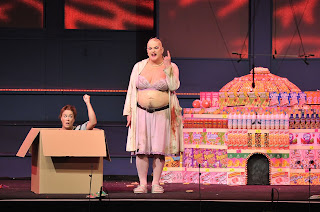 Needless to say Wolfgang Ablinger-Sperrhacke's bald, hairy-bellied fright of a Witch (pictured above with the definitive Hansel of Alice Coote by Chris Christodoulou for the Proms) set some chins wagging, and one old bloke accosted us at the end to tell us he'd walked out in disgust. But children can take it. And of course we all oohed and aahed at the semi-staging's solution to the vast supermarket-sweep 'house' of the original production: a mini Albert Hall. But of course! Yet who'd have thought it - and I wonder what Sir Henry would have made of Rosina Leckermaul sticking her pink wig on his bust. Had a good laugh like the rest of us, I hope.
Posted by David at 14:58

'Victimised children' as you put it, are almost always 'unable to identify their attackers' in the sense that the children blame themselves, therefore tend not to name the abusers: it simply doesn't occur to them that The Other could be wrong.
Ask any child of an abusive parent - or a child protection officer. Or an unwanted child, perhaps.
Children can grow up with the most appallingly skewed visions of themselves - ugly; stupid, unloveable - which are far from true; yet these are what they believe because these are the views expressed by parent(s) and/or older siblings. Such views inculcated early enough can and do wreck lives.

Well, that's me told. I understand all you're saying, Minnie, but in the context of the film, it felt that Haneke resolutely didn't show us WHY the child in question might not want to name his attackers, all for the sake of sustaining the mysteriousness to the end.

It may well be that, as we were later shown in a different context, delinquent offspring of outwardly respectable authority figures simply couldn't be identified for the sake of propriety.

Hope all that doesn't need to come with a 'spoiler' notice. I've tried to keep it vague.

Isn't there a sense that the children's world in the film is different and separated from that of the adults? Hence the lack of communication between the two. Wrongs committed in one do not translate to the other; there's a different kind of morality (equally wrong). I totally bought that.

The Haneke WOZZECK idea is a brilliant one... though would he be content with having the timing of his work so rigorously controlled?

Yes, Gavin, I think that's right, on reflection. Films like this do shock us into thinking, can it really have been that grim? But probably it could have been, and probably it was.

I saw the film in the cinema and I haven't forgotten it. Amazing how the digital black and white has those piercing extremes of dark and light. It's a real kicker to the endless summer of Merchant Ivory loveliness (however much I love it).

"If by eternity is understood not endless temporal duration but timelessness, then he lives eternally who lives in the present"
(Tractatus 6.4311, trans Ogden) - rather a suprisingly human piece of advice from Wittgenstein.

I do not believe that we can advance beyond - To be or not to be, that is the question - these words taken by themselves.