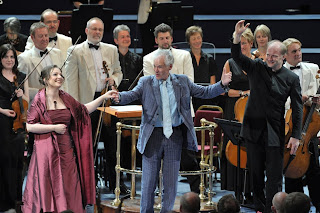 All over, the Proms, that is. Except for Radio 3 repeat broadcasts and iPlayer remains, which give you three days to hear Noseda's shatteringly beautiful, fleet-footed Mozart 40th and the singular Dorothea Roschmann in Robin Holloway's Schumann/Mary Stuart treatment (not going to give its full name here). Above are soprano, composer and conductor in the nearest I got to a big farewell. Chris Christodoulou took the picture, and I'm so pleased he came up with a gallery of the season's wackiest conductor shots for The Arts Desk. No-one catches the moment better than this. And the piece is cross-referenced to list all our reviews of the top Proms.

Highlights out of the 16 I attended? Well, there were good things even in the most familiar places. Number One remains the Dausgaard Danish Prom with the Langgaard Music of the Spheres centrepiece. I enjoyed Ashley Wass in the Foulds Dynamic Triptych, and his conductor Donald Runnicles' ineffable way with the slow movement of a curious Elgar One; Julia Fischer, peerless in the Shostakovich First Violin Concerto with Jurowski and the LPO; the revelation of Stravinsky's Threni under Atherton; bits of the Sondheim evening, though not the whole; the moving-to-tears semi-staged Hansel and Gretel under Ticciati; and all of last Monday night, from Deneve and Lewis to Spinosi, Jaroussky and Lemieux (that late nighter gets my special rosette for most unexpected gem of the season, maybe the entire year, let's see). Only saw the Meistersinger on the box, owing to a Saturday of afternoon parties, but of course I'd been there in Cardiff and Bryn should be showered with awards for performance of the year, whatever else happens between now and Christmas. 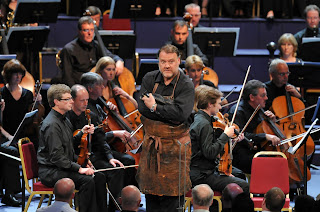 Heard odds and sods of the Last Night on the car radio driving back to King's Lynn from Castle Acre, our final destination after what turned out to be 18 and a half miles and 14 churches on our annual walk. Full report with pics to follow. The Onegin Polonaise didn't sound good enough for Belohlavek, and it turned out to be from the Ulster Orchestra in Belfast. There was a soporific guitar piece, a very classy Thais Meditation solo from the leader of the BBC Philharmonic, and Dame Kiri sounding sluggish but still rather youthful singing 'O mio babbino caro' in the park. We only caught the Chabrier Marche Joyeuse from the second half as the car pulled in to old Lynn, but how I love that piece (especially in Ansermet's recording).

And the Prommers - don't moan about them, please. They raised what now stands at an unfinalised total of £90,400 for musical charities - the Musicians' Benevolent Fund, the CLIC Sargent charity which helps to provide music therapy for children with cancer and the Otakar Kraus Music Trust which does the same for children with special needs and their families. Do you know, some joyless bastard on the Radio 3 messageboards complained about the 'self satisfied' chant the Arena crew gave out every night to keep the audience informed. And was duly rebuked by a regular telling him that it was a legal requirement by the hall and the BBC. Bravo, anyway.

Talking of legal requirements, blogger Intermezzo seems to have received an apology from the Royal Opera over its litigious objections to her using production shots. I came up against the same barrier last year, when I wanted pics of Lulu, only to be told they didn't allow bloggers to use the press images. But they thought they might make an exception if I sent them the copy. I did; they never responded. Later I used a Rosenkavalier image and was told by the press office to remove it immediately. It all seems so foolish as this is free publicity, surely; and no other arts institution I've encountered has ever raised the slightest objection. Mind you, I can see there's a grey area about curtain-call photos, and anyway I find them deeply boring. Unless, of course, they're taken by the consummate Mr. Christodoulou.
Posted by David at 10:03