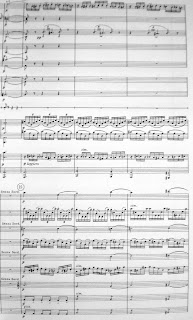 Who, among 20th century composers, really solved the problem of a clinching symphonic finale? Triumph became difficult: in that respect, only Nielsen 5 is up there for me. But in terms of more ambiguous resolutions, I think of Shostakovich 8 and 15, Vaughan Williams 6 - and now Martinů 3*. It hit me with the force of revelation on Saturday, and I could hardly stop weeping.

Why? Because, having had his expected syncopated Allegro thrash, Martinů unpeels sad and exultant layers of beauty only briefly anticipated in the central Largo of this embattled symphony. It's going to sound dull if I just enumerate them, but I will: the tortured writing for the violas which climbs ever higher in search of release; the simple oboe figure - and then the above, what Patrick Lambert described to me on Saturday as 'sheer elevation' of a very transcendent kind. It's the concerto-grosso principle of bringing a solo string quartet to the fore, but having each player's section colleagues as muted back-up. You get that in a very moving passage of the Fourth's great slow movement, too. But this is even more complex, enriched by rippling harp, staccato piano and flutes, burbling clarinets.

And that's not all. It momentarily comes as a bit of a shock when the woodwind start brightly fanfaring in the symphony's goal-key, E major. But the massed triumph is short-lived, buffeted by discords. The strings hold on to the chord, but in three curt protests, the piano insists that perfect peace can't be left unchallenged.

This odd apotheosis is further complicated by personal quotations: the famous chords from the opera Julietta - by way, conscious or not, of Janacek's Taras Bulba - which mark out the hero trying to hold on to the memory of his first encounter with the voice of his beloved

and the desolation of a little three-note figure from Dvorak's Requiem, which Martinů knew through its quotation in his teacher Josef Suk's Asrael Symphony. There it marks the double loss of Suk's father-in-law, Dvorak, and then their beloved Otylka (Dvorak's daughter and Suk's wife). 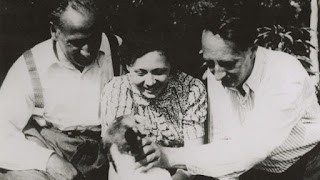 I don't think it's too fanciful to hear the end of the Third as Martinu reaching out again to the great love of his life, the brilliant young composer Vitezslava Kapralova, who died all too young in the truly awful year of 1940, shortly after Martinů had come to realise that he had to leave Paris following the Nazi invasion. There he is, right, with her and her father above. It was a love of which his biographer, Milos Safranek, even if he was fully conversant with the facts, couldn't speak without wounding Martinu's long-suffering wife. The next few years gave all too little breathing-space to reflect, but out of the terrible depression of early 1944 came the Third Symphony. Its performance on Saturday I shall never forget, my first concert-hall acquaintance with this masterpiece. Attached as I am to my Bamberg/Jarvi recording, I'll be glad to hear how it emerges on the impending CD set of Martinu symphonies taken from these live performances.

On Friday, the unknown (to me) quantity of Lawrence Renes leads the currently overworked BBC Symphony Orchestra in tackling the other truly colossal memorial of the 1940s, Shostakovich's Eighth - a shattering monument twice the length of Martinu's, and very different. 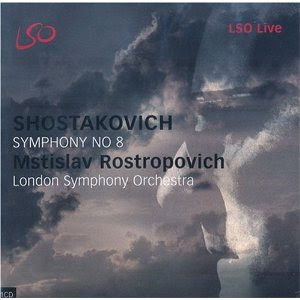 I'm wary about going, because Rostropovich's last Barbican performance of it with the LSO, mercifully captured on the above CD, went as deep as it's possible to go in a symphony. Well, we'll see. What's for sure is that both symphonic endings give us some sort of qualified optimism after all that anguish.

22/4, post-midday: for those of you anxious to know about these things, the programme for the 2010 Proms is now up and running on the BBC website. I daresay I'll get into it again when it happens, but very little has me jumping up and down with excitement the way that the Belohlavek Martinů cycle or anticipation of Jurowski's performance of Myaskovsky's Sixth Symphony in the season proper have. JEG is doing Martinů's Fantaisies Symphoniques somewhere in a jampacked Czech Phil Prom but not, if you please, at the end, which is the only rightful place for it.

*an afterthought - perhaps I should have said post World War One, because Sibelius 5 provides another sturdy specimen of the triumphant, and the Sixth another example of beautiful ambiguity.
Posted by David at 13:03

Agree wholeheartedly with you about the 'clinching finale' of Nielsen's 5th. Now off to find a way of listening to the Martinu 3rd: thank you in advance for the enlightening background info.

Get the Jarvi set of six, Minnie. Or just 3 and 4 (4 was my library choice on Radio 3, though 3 I fancy will be eclipsed by Belohlavek's BBCSO performance when that eventually comes out on CD).

Did you listen to the _BAL_ feature on _Asrael_ about two weeks ago? I might buy the old and famous CPO version, though both wish that Sir Charles would, health permitting, be allowed to record it and/or that the currently-out-of-print Kubelik was not so expensive on Amazon!

I agree about the Proms, though will be curious about the _Meistersinger_ for Mr. Terfel, though currently do not expect the performance as a whole to match the one from Edinburgh a few years ago. Again health permitting, I would like to hear Sir Charles conduct J. Strauss, and maybe the Sondheim and R&H evenings could hold some interest. I did not check as to who is conducting/performing Elgar _One_.

Since, weather permitting, I hope to be away most of tomorrow, I think I will premiere my copy of _R&J_ today, though I now gather that there may be some controversy as to Prokofiev's actual birthday, 23 April however still being listed in my two home sources.

Elgar 1 comes from Runnicles and the BBC Scottish Symphony Orch - exactly the sort of rep he does well, and it should sound fresh.

I've had a closer look at the rep, having had to do a minichoice for The Arts Desk, and it grows on me. The concerts conducted by Thomas Dausgaard are intriguingly planned.

Yes, there's doubt about Prokofiev's actual birthday - the certificate is different from the date he actually marked. As a young man, he always celebrated on 11 April, due to the anomaly of the Gregorian and Julian calendars.

I also read, or was reminded, this morning that we do not accurately know when the Bard was born either, 23 April having been his death date.

I have yet to hear Maestro Runnicles conduct Elgar, so maybe should listen. I hope, as is being increasingly done these days, that he seats his first violins at his left and his seconds on the right, as was done in Elgar's time. His music usually seems to demand such. Maestro Dausgaard seems to be doing interesting things with his Swedish band, so maybe should check as to what exactly he is doing.

from Yehuda Kanaar, Manchester
I know you didn't like the Mark Padmore Winterreise, but what do you think of the other new Harmonia Mundi release of the same work, performed by Werner Gurer? I have only heard parts of it but it sounds very promising indeed.
Thanks to you for recommending the Jervi recording of the Martinu symphonies - I listened to them last weekend and they were excellent. Mind you I did listen via an Italian UnisonResearch CD player, connected to six, yes six, firebreathing Cyrus monobloc amplifiers through B&W Nautilus loudspeakers(£45,000 a pair if you're interested) but they did sound beautiful and MEANINGFUL - I don't always get 20thC music. Pity this equipment doesn't belong to me and probably never will.
Yehuda Kanaar, Manchester

Hello Yehuda - I haven't heard the Gura Winterreise yet, but I do like him as a singer. My allegiance is to the very heavy weather of vintage Peter Anders, not that I'm immune to a persuasive alternative.

Was recently warmly recommended Stephan (sp?) Loges as a Lieder-singer, since I'd been a bit disappointed in Matthias Goerne.

Glad to spread the word about Martinu and Jarvi...

Many thanks for the recommendation, David. Managed to catch the Belohlavek perf. ('Performance on 3' Tues. 20/04) and was amazed - although, of course, being there must have been so much better.

And thank you, Minnie. Your blog is charming and eloquent (though it took me some time to find it). I'm delighted you love Hilary Mantel, though I beg to differ with you - here, since it seems I can't comment there - on most of the stuff between A Place of Greater Safety and Wolf Hall: for me, Every Day is Mother's Day, Vacant Possession, Beyond Black and A Change of Climate are all great masterpieces in their various genres.

And I still have to read the revolutionary 'first' novel...what pleasures await.