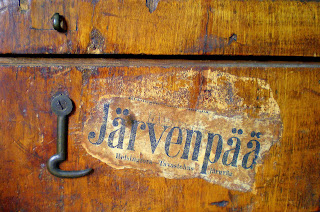 This is the last entry on Ainola, I promise. And it might seem to be a bit of an empty shell, like the violin case above. It's precious in itself, because it housed the instrument of the musician who declared he was 'too nervous to be a really good player'. I hope I'm right in saying that Sibelius kept with him the Steiner violin passed on by his Uncle Pehr, and that he passed it on to a granddaughter who still plays and teaches in Parma (correct me, Hilkka, if I misremembered; I should have brought out my notebook). 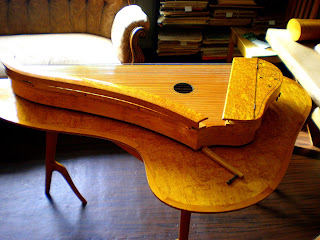 There is, however, one very beautiful instrument in the same upstairs room where odds and ends are housed, by and large away from the prying eyes of regular visitors to Ainola: a 38-string kantele on its own matching table, given to Sibelius in 1950 by a local craftsman. It's of handsome design and sonority. 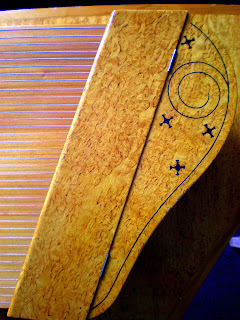 The more primitive, five-string variety was, of course, essential in folk music, and Sibelius was certainly inspired by it when he went out hunting down runic songs and listening to the singer Larin Paraske, whose song-range would seem to correspond to the five notes of the folk instrument. Only the evocative name of the kantele is truly unique to the Finns - the Persians have their santoor, the Austrians the zither, the Russians the comparable gusli - but nevertheless its revival has been quite extraordinary, incorporated into popular music and very popular with the young. I won't claim any great musical revelation about this clip of Finnish schoolchildren, but it does tie in nicely with the country's amazing musical education programme.

And here's a Japanese exponent, Mitsuko Sato, playing the famous patriotic song at the heart of Finlandia:

I could go on; YouTube is the most extraordinary medium for leading you from one thing to another. Little did I imagine I'd end up hearing one Peter Pringle playing the electric kantele, theremin and even accompanying himself on the hurdy-gurdy in stanzas from Beowulf...rich pickings indeed.
Posted by David at 13:37