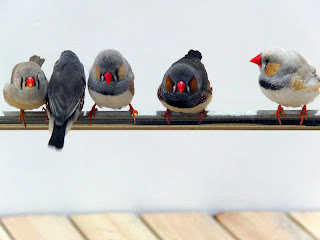 What a weird week: paralleling the unpredictable course of bereavement, I've seen and heard Thomas Ades in fabulous recital, Myaskovsky well done by Jurowski with a dazzling performance by cellist Danjulo Ishizaka in Prokofiev's heartbreaking Symphony-Concerto, Debbie Reynolds strutting her stuff at the Apollo Theatre last night, and guitar-twanging zebra finches. As has half the rest of London by now, I know, but since it's the one I didn't get to write about over on The Arts Desk, let's give a word to these little darlings (pictured above and below by Lyndon Douglas; strictly no photography allowed in the sanctuary).

It's Celeste Boursier-Mougenot's gift to the Barbican's great Curve space, where I've never so far seen a dull happening. CBM's leads you through a strobed dark zone covered in video projections to the bit that everyone wants to see: a flock of zebra finches flitting between 'islands' of eletric guitars, basses and cymbals. As they land or perch, the sounds they make are amplified - and they don't seem to bother the birds at all, which sit there seemingly happy, staring at you and chattering away. Two have even made a nest in one of the guitars. 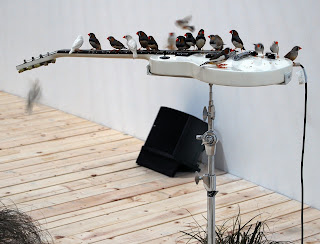 Seems like the perfect show for the Barbican, which of course played host to the most successful of all the BBC Symphony Orchestra's composer weekends, the one devoted to John Cage which included assorted pals and 'special guests' rotating through piano performance of Satie's Vexations in the conservatory all night long. Boursier-Mougenot, trained as a musician and composer, is very much in the Cage line, and shows there's plenty of mileage still to be got from this sort of thing. I took visiting Lottie to see it just before the Ades recital, since for the first time when I passed it there were only a handful of people queueing to get in.

And if I weren't against cageing birds, I'd want a couple of those heavenly creatures to keep me company at my desk. Here they are al fresco in a fun little film.

Relieved to see no finches were harmed during the making of this - well, what should one call it?
I suspect the feathered fiends are, in fact, wreaking revenge on their exploiter by channelling Jimi Hendrix at his worst ... :-)!
Bon weekend.