Preludes for the First of May 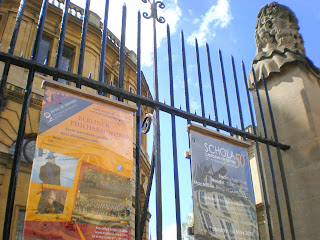 And what preludes, starting with the night-into-day of Hans Sachs's meditations as reflected in the third act introduction of Wagner's Mastersingers and ending in a blaze of Handel. It was deliriously wonderful to be strolling around Oxford early on the morning of May Day, even if I hadn't been there in time for the dawn chorus from Magdalen tower or the sunrise pub openings (that's quite a memory). But there I was, happy to be accosted by a merry drunken girl student with dyed hair as I bumped into Tom Service on the way to the Sheldonian. 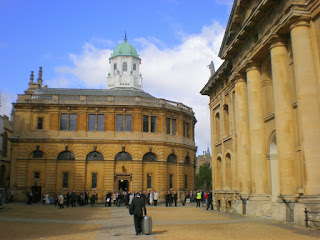 Indeed, it was a kind of dream, because we were heading to hear Barenboim and the Berlin Philharmonic (or Philharmoniker, as it now prefers to be known as a 'worldwide brand', ouch). Every year since the fall of the Wall, the orchestra has played a 'Europe Concert' in a beautiful venue on 1 May, so after Prague and Moscow it was Oxford's turn. The concert also showcased a young cellist who, no-one could avoid thinking, might be another Du Pre in the Elgar Concerto, but with a personality very much her own, Alisa Weilerstein. Here she is with Barenboim in the first of two wonderful professional shots reproduced here by courtesy of the 'artist', Chris Christodoulou. 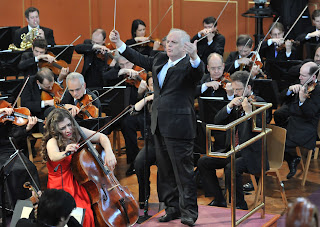 About that Dionysian event I managed to wax lyrical for the Arts Desk, only an hour after the performance, ensconced in the comfort of the Randolph Hotel and struggling with wi-fi connection. There's just one more thing to add, courtesy of TAD colleague Jasper Rees, who was there as a friend of the BPO's second horn; and that's to the effect that the players were as impressed by the audience being part of the performance as we were to observe them smiling at each other and enjoying what they were hearing when not engaged. Of course the Sheldonian is hardly the lap of luxury; most of us were sitting on benches with the person behind's knees around our ears. My witty neighbour, responding to my comment about forgetting pain under such circumstances, commented 'but my muscles don't have ears'.

Yet we were all jolly still, moved to tears by the Wagner and Elgar, exiting with our legs buckling after a concert ending as exciting as any I've heard (in fact only Bernstein's Mahler 5 at the Proms is probably up there for me). I can hardly believe it, but while the BBC hangs fire on transmission - the concert was shown live all over Europe - medici.tv has it up and running for free (no idea how that works; anyway, I'm reliving the finale right now) You can do a 'Where's Willy' in the second of Chris's photos if you want, for there I am at the giddying end of Barenboim's Brahms One, hands raised aloft, before I followed my next-but-one neighbour's example and rose to my feet, quickly joined by Tom. 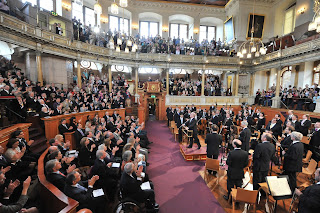 How it had really affected us was, in fact, one of those delayed reactions - as Fiona Maddocks and I exchanged wonder at how shaken we were, I suddenly thought I was about to burst into tears, of which in the aftermath there hadn't been any hint up to that moment.

Stepping out, I gathered most of the May Day revels were done, and morris dancers gathered outside Blackwells and the pub next door. 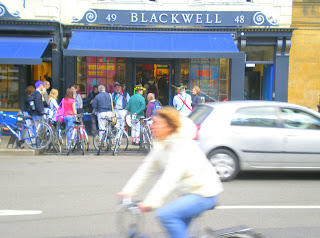 Can anyone explain the white-faced, begloved cortege with a branch of cherry-tree blossom, who did a weird circular pattern by the Sheldonian before processing onwards? 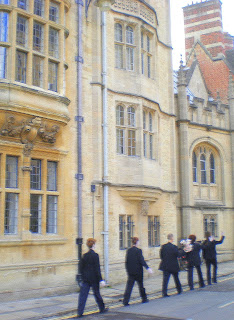 Anyway, by the end of the concert, J and Hen, with whom we were spending the weekend at her parents' house in north Oxford, were due to arrive, and as I'd bumped into Andrew van der Beek and his daughter Theodora on their way to the next musical event, we all met up for a splendid lunch in the wonderful Quod. 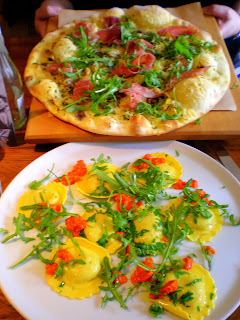 Andrew and Theodora were off to hear a rehearsal. As the BPO left, the OAE came in to play for the Schola Cantorum's 50th anniversary concert that evening. We'd planned a quiet evening in Norham Road (with the delicious Julie and Julia, as it turned out - ah Meryl, what a comic genius), but how could we resist hearing the programme in preparation? Here was another glorious sound, the cut and thrust of a brilliant young choir conducted by the excellent James Burton, joined by 100 former alumni. 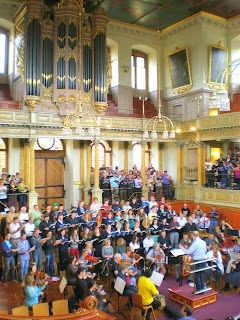 Among the soloists giving their services was Dame Emma Kirkby, who'd once - as she told everyone amusingly and with no little charm - been turned down at an audition by the SC chorusmaster. He had written out some ornamentations to her solo in an attempt to make amends.

Alas, the chunk of rehearsal we heard didn't include the MacMillan premiere, but we were certainly knocked for six by Handel's Dixit Dominus. And the minute the gorgeous Christine Rice opened her mouth, what quality. I managed to have a quick chat with her, as I'd only the day before been listening to her singing an Elgar song.

Well, that was quite a start to a glorious if climate-wise variable weekend. I'll catch up with our visits to three colleges in a future entry.
Posted by David at 10:37

Read your review on AD, so interested to have the further background (the discomfort: ouch, indeed!). I hear Radio3 won't be broadcasting the concert: huge let-down, so hope Arte (Franco-German cultural telly station) does.
Schola Cantorum + Emma Kirkby - lucky you! Look forward to your accounts of the subsequent college events. And if it's any consolation, the weather's awful here, too!

But, as I added probably after you read, I've just discovered you can see the whole glorious thing on medici.tv FOR FREE - how extraordinary! And what an asset is the other MTV. I knew they produced the best and sometimes the most unusual music DVDs, but I'm now a fan of the service (and this is not vested-interest publicity!)

Ah, terrific! Yes, I had missed that addendum. Many thanks for alerting me - and free, too (even better)!

Found it a bit disapointing to be queuing for the Berliner and to have people cheating in the queue... different atmosphere from the Proms. Oh well. Wished also people outside could have heard more of the music playing inside. The orchestra indeed sounded like a rolls-royce, oops should I give the name of another car manifacturer?

Interesting perspective, though sorry for your troubles. Must have been dastardly Londoners, for I'm sure the noble Oxfordians would do no such thing (unless inspired by the spirit of misrule hanging over from Mayday eve).

Of course if I'd seen anybody lurking around in the interval who hadn't got a ticket, I would have invited them in and pointed them to one of the many unoccupied seats.

Anyway, at least you can watch it on medici.tv for free right now, if that's any consolation.

Ah... we like Quod. Spent many a birthday/date/any excuse there.

I have heard little of Maestro Barenboim's work since his early days, and based on that, it seems as if he is less-radical than he once was. I admit to not being as fond of the Elgar _Cello_ _Concerto_ as of the _Violin_, though a great cellist can bring out its beauties, notably in its First and Third Movements. And my annual Brahms cycle is now well underway, and I think you know who is conducting the Symphonies, including the _First_, to which I listened prior to this session, the _Second_ to hopefully follow it. It is my custom to have Brahms on 7 May in odd-numbered years, Tchaikovsky in even, so tomorrow brings the latter, including that Muti _Fifth_ I bought a couple of years ago at your recommendation!

I wonder where that leaves the 'Manfred', JV?

I hear wonderful things about Jurowski's Brahms on CD. His Proms First was just magnificent - easily the most soaring account of the slow movement I've heard, and that even includes Abbado.

Barenboim was always a bit heavy as a conductor - there are some truly terrible Elgar recordings - though such a wonderful pianist (as he still is).

I like the _Manfred_ to the extent I know it, but do not yet have a recording. Would it be Maestro Muti again?

I could not agree more about Maestro Barenboim's early Elgar, notably the Symphonies, but did like some Mozart I heard from him as a pianist.

No, JV, the best Manfred I know (apart from much-cut Toscanini) is Jurowski's on the LPO's own label, which comes, I think, quite cheap.

I was recently moved to tears hearing Barenboim play Chopin's Berceuse. I'd love a little more of that sort of thing from him. And gosh, he and Jackie were vivacity incarnate when young - there's some film footage from the 1960s which is soooo charming.