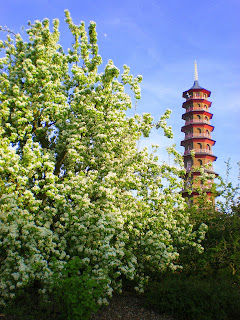 Better keep my word and roll out the last of the mid-spring photos from my river rides over a week ago (how quickly it's all changing - most of the blossom has blown away in the weekend blusters). The second trip took me to an old haunt, Kew Gardens, rather forsaken recently for the Chelsea Physic Garden, though I'm still a 'friend' with wadges of unused passes. Strictly speaking the two gardens are incomparable and the Royal Botanics have to be the most spectacular in the world, in terms of species though probably not setting (how blissful it must have been during the days of the ashcloud when no planes roared directly over the palm house). 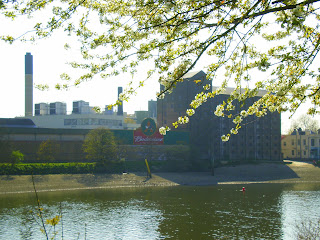 and alongside the sewage farm, now nestled among otherwise desirable riverside residences. So to Kew. Apart from the bluebells and the magnolias 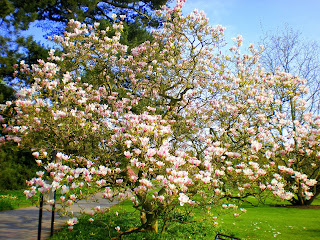 most of the great flowerings are indoors: a nymphea in the small palm house 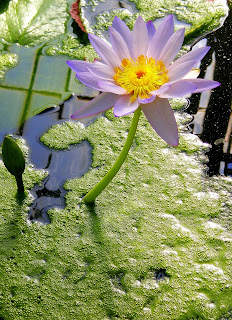 and gems in the relatively new Alpine House, including the ranunculus asiaticus 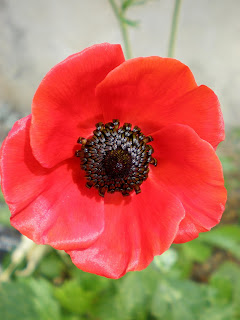 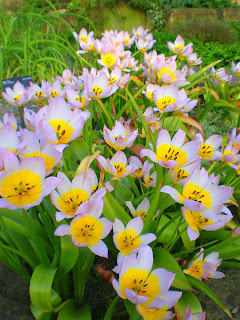 Hopefully a few specimens like this will reveal themselves in the mountains of Georgia; I can hardly wait. In the rock garden just beyond, peonies are beginning to flower. The weirdest is paeonia tenufolia with its ferny foliage. 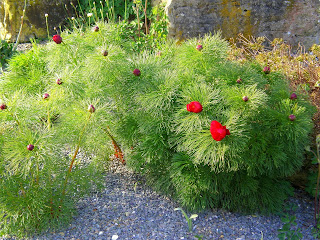 On, then, past a forest of sprouting ferns 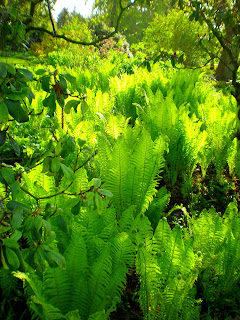 and a spin around the lake, the late afternoon sun casting rare light on the distant palmhouse and gunnera shooting up in the foreground 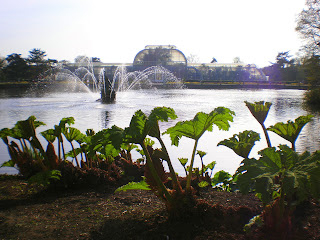 before I headed up to the orchards around the temperate house and then out at twilight. That was the perfect time for the early budding of my favourite tree, the copper beech. 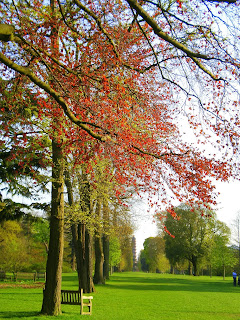 Last weekend we saw an even more spectacular specimen in the garden of Norham Road. Already the leaves are losing their early shade, though what replaces it is almost as beautiful. I feel a 'trees of Oxford' rhapsody coming on.
Posted by David at 10:01

Glorious! The perfect antidote to miserable city dog-walking in the drizzle.
We've had pouring rain + spectacular 'coups de mer' here, the latter extending all the way along la Côte from Menton to La Ciotat. All 15 plagistes (seafront restos) along la Promenade des Anglais destroyed; la Prom' itself entirely flooded, therefore closed off ... the full works, quoi! Terrible timing, as the Cannes Festival kicks off shortly, as does the holiday season. Our mayor (who is also Industry Minister in national Govt) has immediately demanded it be classified a natural disaster to expedite insurance claims. In the meantime, the place is devastated - and the people the human equivalent. Awful.
Thank so much you for the delightful diversion - timely reminder of what should & will be ...!

Ma foi, Minnie, how terrible. I had no idea. All I can think of is Nice in bloom when we last spent a May afternoon there before getting a boat to Corsica.

Still not having the hang of message-leaving - I must check what you wrote - I loved your poetic homage to La Hambling. She is our New Best Friend, but even we have not so far heard the eloquence with which she opened her rather lovely soul to Hilary Whitney on The Arts Desk.

Apparently - I've yet to see them - the sea pictures in Cambridge and the seastuff in London are both superlative.

Love the sc(a)ollop too, but you remember the fuss the Aldeburgh worthies kicked up when it first appeared?

As we expect around here, our weather has been variable, a fairly-cold April followed by a recent two-or-three-day heatwave, though I resisted temptation to have my air conditioners installed for the Summer. I would prefer to have that done _NO_ _EARLIER_ than early June, though might have to consider late May if necessary. Last Summer was comparatively mild, and thus I was able to hold off longer than usual! Things are rather glorious now, though just a mite humid at the moment, though a nice breeze is hitting my back through the open window. I cannot tell you about the flowers, though you may have heard of the Japanese cherry trees which bloom each year along the Tidal Basin, thus giving rise to our Cherry Blossom Festival, held in early April.

p.s. I am told that there are some beautiful dogwoods in various places.

I've just been teaching Magda, our lovely Polish cleaner, the maxim 'ne'er cast a clout/'Til May is out'. And boy, has it been variable. Now the sun shines again and the warmth has returned.

Thank you for your appreciative comments, David: Maggi Hambling proving inspirational - her due! Yes, I do remember the kerfuffle kicked up by the local worthies (it is what LWs are there for, I fear). Silly things.
Now I wish I'd seen the sea pictures in Cambridge when I was nearby.
You'll both have to visit Nice again - and for longer, to do it justice! But lucky you for the trip to la Corse (hope to make it myself before long).