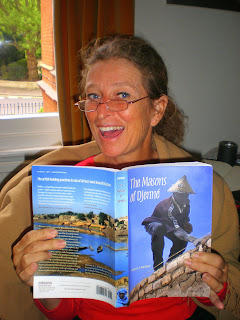 She's here, the Grand Sophy(ie) aka La Sarina, godmother to this blog when she set the example by putting her own much more exotic life as a Malian hotelier on line. A couple of weeks ago she was excurting on her beloved Maobi to one of the villages near Djenne we didn't see on our trip 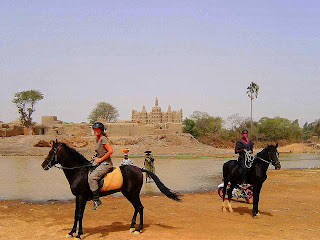 and only last week stroking mythical horn-less unicorns on a riding course in Seville. 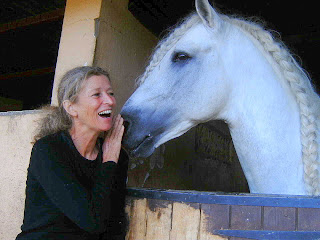 And there she is up top, our remarkable Sophie Sarin, happily blasted by Gergiev's Stravinsky (stunning Mariinsky disc of Oedipus Rex and Les noces) at home here as she settled down for a good read. The book is on the master masons of her town by a chap who left just before she arrived. He has an exhibition of photos at RIBA which we must go and see.

Today London decamps to Glyndebourne and Seaford while Djenne Djenno stays put. I linger on the airwaves via four minutes' chinwag with kindred spirit Jonathan Swain on Mahler 7 (available on the iPlayer until next Monday - chat comes after David Matthews's beautifully orchestrated, substance-wise take-it-or-leave-it Seventh Symphony at about 30'40) and on Saturday at 6pm at long last they're broadcasting Prokofiev's The Gambler - the Royal Opera performance in which Andrew MacGregor and I sat in a box and chatted quasi live. I'd put up a pic of the production but the Royal Opera's ludicrous ban on using photos on blogs - inconsistently applied - forbids.

Should just mention that this is being flagged up as part of the big BBC opera season. Don't miss Pappano's telly programmes on Italian opera starting next Monday - those should be rare quality - though do what you like with S Fry and slebs. One amusing outcome was that splendid Dame Kiri, the Beautiful Voice of the late 20th century alongside Margaret Price and hosting what sounds like a well-backed voice competition on Radio 2, has been speaking common sense on S Boyle, A Bocelli and the like in interview. This is badly written up and trails a load of illiterate, venomous trolls in its wake, but the lady spoke wisely, I think.
Posted by David at 11:19

Your posts continue to amaze with their tremendous scope - this time, its both exotic and illuminating! Glad to have the refs, and will be sure to list. Usually tune in to Opera on 3 anyway.
Look forward to reports on Glyndebourne as and when: bonne route!

The comments made by Kiri point to two different aspects of the matter. Classical singing is different from musical theatre and the voices are just not the same, whether originally or by training. But this does not mean that one should be hostile to the cross-over between the two, as that encourages the musical theatre fans to experiment with the higher art form, and reduces the negative effects of a cultural divide

Yes, I'm sure Kiri wouldn't have disagreed that Susan Boyle made a decentish enough shot at singing in musicals (I'd stop short of 'musical theatre' - some are, like R&H, Sondheim; others by Boublil and Schonberg and ALW I wouldn't grace with the honour). She clearly just didn't want her brought up by the interviewer as if she were an opera singer - an error not of her own making.

Some musicals have parts for operatic singers mixed with roles for show voices (usually meaning taking the chest voice higher, if that's not reductive). Kiri and Dame Gwyneth probably shouldn't sing 'Memories', but something like 'Climb every mountain' or 'You'll never walk alone' is true mother-mezzo stuff.