The penny didn't drop until I was back in Lewes after a harrowing evening at Glyndebourne: Tom Paine, the author of The Rights Of Man evoked by Britten's Billy Budd and labelling him a potential mutineer though he's actually referring to the name of a ship, spent crucial years in that generally liberal, if Catholic-hating town so close to the country opera house. We have a distant gleam in the eye about a home and a garden there, which grows by the year and with better acquaintance. Much encouraged by making the acquaintance of gems like the above shop, the Tom Paine Printing Press and Gallery which has only been there about six months, bang opposite the house where the great man himself lived and worked (and with one of my favourite of all second-hand bookshops just up Pipe Lane to the side).

Peter Chasseaud, who's just run off from the press the prints up top - and I want to buy one - also has a blog devoted to the Press. Last year was the bicentenary of Paine's death, and to my shame I still haven't read his seminal defence of the French Revolution, though I now have a copy. As for the show, it had a defect or two too many to be compulsive, as it should be, from start to finish, but Michael Grandage's first opera production was a pretty fine piece of work. Here's John Mark Ainsley's Captain Vere trying to reassure a flabbergasted Billy (Jacques Imbrailo) as he stammers in the face of accusations from the awful Claggart (Phillip Ens; this photo by Alastair Muir). 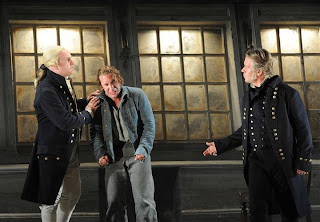 I wrote up my Arts Desk review in record time, 45 minutes tapping into the Glyndebourne WiFi outside the Press Office before our taxi arrived to whisk us back to Lewes. Didn't even have the opportunity to look it over, but it turned out OK. Picnic interval as the temperatures rose towards a hot weekend was full of friendly faces - philosophers, Italian princesses, students, publishers - and much enhanced by splendid fare put together by the emporium which is one very good reason for living in Lewes, the splendid Bill's. That's another Hockney design on the 2010 programme cover, celebrating 35 years of his immortal designs for Stravinsky's Rake's Progress.

As so often, we stayed with former Glyndebourne stalwart Charles Kerry, who served up a characteristically superlative lunch of local gathered produce, including sprouting sea kale from the beaches below Newhaven.

What I love about Lewes is that you can strike out in every direction, and every walk is rewarding: to the east, Glyndebourne over the cliffs and along the ridge; to the south, the sea either over the Downs or along the Ouse valley; to the west, the race course and the next wind of Downs. On Friday, we headed north along the Ouse

with hawthorn in profusion, nesting, nestling and gliding swans and roving cattle in the water meadows. For a morning's jaunt, it makes a wonderful circuit to head up the hill and through dense woodland back into town.

Our evening destination on Friday couldn't have been at a greater remove from Glyndebourne. The drama that our New Best Friend Chris Gunness of UNRWA had originated in Jerusalem, about the Israeli bombing of the UN humanitarian-aid warehouse in Gaza, had been reworked by Brighton stalwarts Faynia Williams and Richard Crane. Once again, I've written up the experience on TAD. Here's a production shot by Malcolm Crowthers, one of the few photographers to make much of the stage, of Anna-Maria Nabirye as the 'conscience' of the burning warehouse. 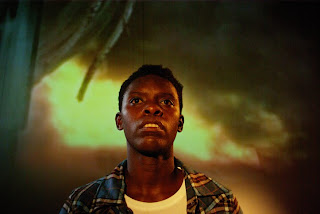 Anyway, here's a bit of context, with my own photos around the fort above slightly creepy Newhaven, clearly a well-organised tourist attraction. First, above the nissan hunt and casements where the entertainment took place:

Looking east over the bay to Seaford

out to the quay and beyond

and upwards to further guns.

We wound our way back along the harbour, where a cross channel ferry was just docking

and had to settle for just a bag of chips before the train back to London. It was, as I wrote in the review, a ghost town on a Friday night, and even the fish and chip shop was closing at 9 - avoiding pub closing time chaos? A world away from Lewes just ten minutes' train ride up the Ouse valley. But decidedly with its own creepy fascination.
Posted by David at 16:29

David, it all sounds so wonderful - great photos and many thanks for the Billy Budd review.

Lovely places, all: remember them well from student years. Thanks for the delightful tour (and for evoking some equally delightful memories).
Very much enjoyed the Billy Budd review, and also the enlightening comments on 'The Gambler'.

I suppose with such beauties I could hardly envy you your walk along the coast path to Menton, but that's something we must do when next in Nice...

Have some problems with Iris Origo, whom you mention (and I still can't comment chez vous), but 'War in Val d'Orcia' is a gripping read and 'The Merchant of Prato' excellent scholarship-come-to-life.

So you listened to The Gambler? Did you make anything of it as a plain broadcast? I'd love to know how it went down with those who don't necessarily know it inside out.

Walk along le sentier littoral more hair-raising than Sussex Downs; but no more ravishing to the eye. Heartily recommended though.
I loved 'The Gambler'- and really appreciated the enlightening and entertaining interval discussions, as I said. Must confess that it worked for me thanks to being sung in English. The story's a compactly compelling drama, and Prokofiev's music contains an ironic element (to my - cloth-y - ear) that adds to the opera's starkness and immediacy. The claustrophobia of addiction came over, too. But should also add that I tend to be a radio rather than telly person (cursed with lurid imagination).
No comments policy prevails on blog, I fear: result of spate of hate (sic). But am on email (Blogger profile) - and in vile mood due to having purse/wallet lifted over w/e, grr, harrumph (fortissimo). Still, Norm's latest Writer's Choice is by an esteemed acquaintance (due to my intro) + off to spend rest of day with lovely friend, so herewith ceases obbligato grousing! Bonne continuation.

Oh dear - I wonder what's to hate about such a seemingly enlightened and generous personage as yourself? Sorry to hear about the theft.

Glad the broadcast worked on your imagination. I must admit that the Chelsea William Tell - concert performance - worked wonders in conjuring Swiss visuals. It's all there in the lovely perspectives of Rossini's score.

Fond memories of Lewes from my only trip to Glyndebourne in 1970: the Tattler Guest House breakfasts and the view south from our room, Anne of Cleves' house, learning to walk with some space between me and the houses made of flint after once getting raked on the arm, excursions into the countryside in all directions.

Those cursed flints! Clearly they weren't knapped (you can see I've imbibed from Alec Clifton-Taylor).

Don't suppose it's changed much since the 1970s, though food emporia and niche-market shops have sprouted in abundance.